Under the afternoon shadow of the Taj Mahal, tourists walk over cold marble and damp grass. They take photographs of each other with the magnificent monument in the background, and listen as their guides tell them the story of the white marble structure and the emperor that built it. Enraptured by the heritage site, the visitors remain oblivious to the intense chase taking place just a few miles off.

A pack of dogs corners a young nilgai (blue bull) in a forested patch in Dhandupura, separating the fawn from its mother. The adult nilgai lashes out, panicking, but the dogs chase her away. Finally, desperate to save herself, the mother nilgai darts off, leaving behind her calf- trembling and cornered.

Hurtling through the crowded streets of Agra in our rescue vehicle, the rescue team from Wildlife SOS’ Agra Bear Rescue Facility arrived just in time. Their arrival startled the dogs, which scattered, revealing the cowering, abandoned fawn. After searching for the mother for a few hours but still nowhere to be found, the team loaded it into the rescue vehicle and took him to the Agra Bear Rescue Facility, nearly forty minutes away comforting the traumatised baby the entire way.

The fawn remained inconsolable even after arriving at our centre. It was transferred from the jeep to the rescue centre clinic, where the veterinary team checked for any injuries and tried their best to put the animal at ease, identifying it as a male- barely 15 days old and still completely dependent on his mother for food and protection.

It took the fawn a few days of stressed mewling and crying before he realised he was safe again. Initially apprehensive of any of the keepers or vets, he slowly realised that they only ever came bearing a bottle of warm milk or some reassuring affection, and he slowly grew accustomed, even fond of the rescue team at Agra.

Now a healthy young fawn, our little rescued antelope is quite the character. He’s figured out which keepers to trot after when he wants some attention, and nibbles at everyone’s fingers and the cuffs of their pants to get them to feed him. He’s gained a lot more confidence, walking proudly through the rescue centre, oblivious to the wild monkeys and other rescued animals around. He promptly kneels down and gulps down the milk from his bottle during mealtimes, and has slowly come out of his shell, even letting his curiosity send him sniffing at people’s feet or inquisitively following behind Mithoo, the rescued parrot at our centre, whenever the latter returns for a fruit treat from the sanctuary keepers.

A few days ago, the vets decided that the nilgai no longer needed constant supervision and could be moved to the extension of the bear sanctuary, to live closer to the other rescued nilgai at our centre. He’s adjusted incredibly well, and the older antelope seem to have welcomed him happily, even though his naughty, playful side tires them out immensely. 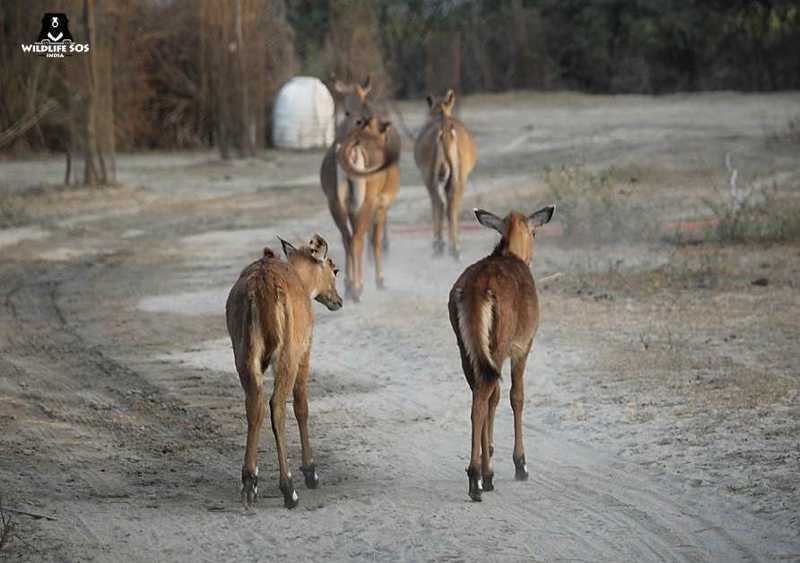 Would you like to donate to our rescue program and help us save lives? Do so by following this LINK.