Iridescent in the sunlight, light glimmering on its scales, it weaves its sleek body through the grass. Sound waves from its surroundings reverberate through its skin, its muscles, its bones, and finally its inner ear, even as its forked tongue darts swiftly in and out of its mouth tasting the air for smells.
It sounds like something out of fantasy fiction, but it isn’t. Curled in hollowed tree trunks, gliding through our gardens, weaving their bodies through the twists and turns of our cities’ plumbing, snakes remain one of the most unbelievably fascinating species of animals in the world.

Undeservingly shunned to the position of demon, pest and devious killer, snakes are also among the most maligned animals in the world- and through no real fault of their own. Snakes don’t kill out of spite, or without reason. Snakes hunt to survive. Snakes bites are always in self defense, out of fear when faced with a predator and threat frankly much more dangerous than itself – human beings. Shunning an animal for its natural instincts, for its adaptation to survive and protect itself in a world gradually growing progressively inhospitable for any animal that has not evolved to keep up with a landscape changing drastically with urbanisation, seems illogical, and symptomatic of a disease of humanity – fearing the unknown, with little attempt at knowing it better, of learning what snakes are all about let alone understanding why they are that way.

Wildlife Biologist Baiju Raj, Manager of Conservation Projects with Wildlife SOS, has had a long relationship with snakes, his passion for the reptiles starting out from the time he was a child, learning about snakes from his father, and growing exponentially since. “Snakes are my first love. They have always been special to me,” he explains, while carefully administering medication to an injured Russel’s viper- one of the deadliest snakes in the country, “What really makes me feel sorry for them is that despite their biological value, they are seen as pests and a threat and are killed by people. Superstitions, even in the 21st century, lead to the unnecessary deaths of so many snakes.”

Indeed, it is a vicious cycle. The lack of awareness about these elusive creatures fuels the misunderstandings that lead to them being feared and killed, and it is this fear that prevents people from really trying to understand the ecological importance of snakes, and to appreciate them for the stunning, magical creatures they are. This despite the fact that snakes play a  huge role in the delicate ecological balance that keeps our planet alive in spite of unregulated human intervention.

Snakes are important biological indicators. They play such an important role in pest control in our cities, controlling the spread of diseases. They’re a farmer’s best friends when it comes to keeping at bay pests that would otherwise destroy crops.

Last Saturday, for International Snake Day, the Wildlife SOS team was in the Asola sanctuary on the outskirts of the capital city, where we release a majority of the snakes rescued by our rapid response unit. Team member, Bindia Sahgal talked to a group of young wildlife enthusiasts about snakes in their city, and why they’re important. 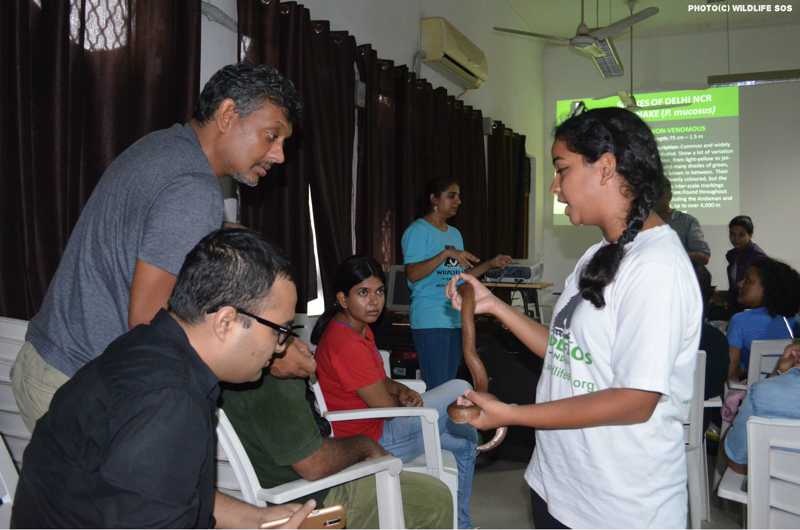 The Wildlife SOS team taught the audience how to identify the various snakes found in their city with the help of some of our rescued reptiles including a red sand boa, common kukri snake and a rat snake, while also discussing what to do if they come across a snake. The interactive talk also gave the team a chance to do some much needed myth-busting, dispelling some of the ill-informed rumours about snakes that cause people to fear them.
Bindia explains, “I enjoy telling people about snakes especially youngsters that haven’t yet formed ill-informed notions or developed irrational fears of snakes, and letting them have a close look so that these reptiles have a fighting chance at being better understood thereby guaranteeing them a safer coexistence with people.”

When it comes to the world’s most maligned animal, all we really need is a little perspective, a lot more awareness and a respect for life in all its forms- even if they scare us a little at first.