25th January 2009. Rohidas Pawale is a poor farmer in the Belha village in Narayangaon district, Maharashtra. His sugarcane field stands tall and proud alongside the scrub jungles that once covered nearly all of the land in this area. From amidst the tall stalks of the crop, a tiny pitiful mewling can be heard, and Pawale tentatively enters the field to investigate.

The cub is barely the size of his forearm, and so thin, he can see her ribs sticking through her spotted golden coat. She continues to cry as he approaches her, but Pawale knows that where there are leopard cubs, there are fiercely protective leopard mothers. He backs away cautiously and contacts the local forest department. An official stops by a while later and Pawale indicates to where the cub is; she hasn’t moved since he saw her last, nor has she stopped crying. The official observes the tiny, helpless animal for a few moments, and then surveys the sugarcane field with a furrowed brow.

The cub had been abandoned, her mother possibly killed or separated from her, and her terrible condition was proof that she’d been on her own for a while- unable to feed herself or defend herself against predators, with no comforting maternal warmth in the cold fields.

The three-month old cub was transported to the Manikdoh Leopard Rescue Centre run by Wildlife SOS in Junnar, 60 km from Pawale’s sugarcane fields. 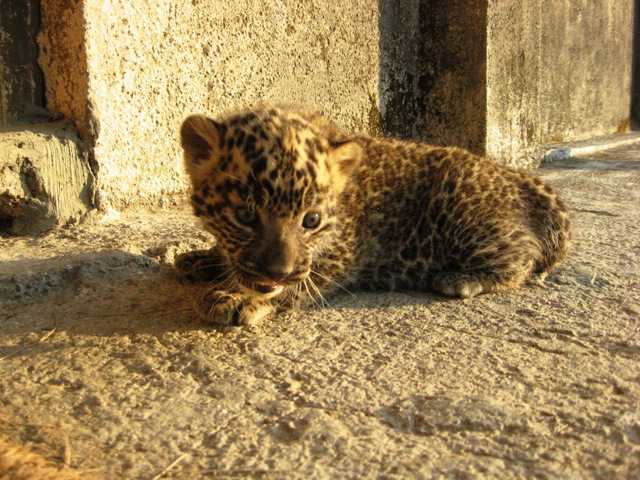 The rescue facility serves as a transit home for leopards under treatment, and a permanent shelter for those for whom release into the wild simply isn’t a feasible option. A few weeks earlier, MLRC had rescued a wild female leopard from the nearby sugarcane fields, after heart-breaking tragedy cost her her own litter of cubs. The timing seemed perfect, and the decision was taken to attempt to introduce the two leopards, in the hope that the wild leopard’s maternal instincts would kick in and the orphaned cub would have some chance at a free life. The cage containing the cub was placed beside the enclosure with the adult female, and the veterinarians and Forest Department officials watched with bated breath. The female leopard walked slowly up to the edge of her enclosure and used her powerful sense of smell to investigate the tiny new introduction to her vicinity. The cub responded similarly, and hopes were soaring.
As is the way with accidents, things went very wrong, very fast.
The curious cub slid a tentative paw through the bars of her cage, and in the blink of an eye, the apprehensive female swiped at the tiny intrusion.

The cage was pulled away immediately, but the damage was done. The cub had lost her entire right forelimb, leaving a gaping wound dangerously close to her chest. The vets swung into action, and managed to save her life, stitching and treating the wound, but the sight of the three-legged cub left them riddled with guilt and sorrow, as it would for years to come. They named her Shivani.

25th January 2016. Dr. Ajay Deshmukh, the senior veterinarian at MLRC calls out to Shivani from outside her enclosure. With an ease that surprises anyone who hasn’t visited her before, she darts down from the climbing platform and presses herself up against the sides of her enclosure, allowing Dr. Ajay to run his hand idly along her luxurious coat as she purrs affectionately at him. Together, they walk towards the feeding dens and he slips in her food, which she drags up to the topmost platform and eats slowly, with relish.
Dr. Ajay joined Wildlife SOS and the leopards at MLRC soon after Shivani came to us, and the two have developed a beautiful bond over the last seven years. Nobody knows her quite like he does, and she trusts him and responds to him with an affection she strictly reserves for this one vet. 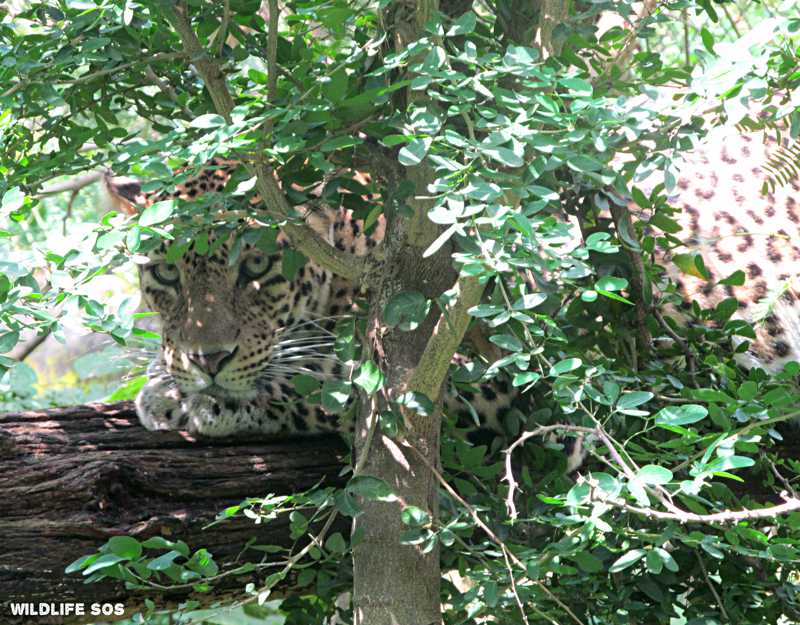 He tells us about the first time he saw her, in the first monsoon since her rescue, her beautiful coat damp and muddy and she tumbled about playfully, her tiny head tilted upward and catching the droplets in her mouth.
“She still loves the rain, running about in the wet mud for hours, and then sitting quietly on her platform with raindrops running down her nose,” He smiles.

Dr. Ajay spends a while each day watching Shivani from a spot outside her enclosure where he knows he can’t be seen. “It helps me understand her better, to get to know her and her habits, to see how she’s doing. If she catches me observing her, she tends to get a little shy and stops playing, retreating into her den or bounding up to wherever I am and asking for food or attention.”

As a result, Dr. Ajay knows Shivani’s routine like nobody else. She starts her day with a good stretch, followed by an intensive grooming session. Once she’s satisfied with the condition of her coat, this beautiful leopard moves on to her nails, sharpening them against one of the trees in her enclosure. She has an excellent sense of timing and knows when it’s feeding time, waiting patiently at her den for her meal, gazing fondly at whoever brings it to her. She drags her food to the platform and eats it there, then drops off to sleep almost immediately. A light sleeper, Shivani’s fuzzy ears prick up at the slightest sound, but not much can make her dismount from her platform in the branches. She alights only after sunset, and then rolls about in the grass or bounds about her enclosure with her best friend, a female leopard named Sitara.

Dr. Ajay glances over his shoulder as the two leopards tussle playfully in the background.
“It always amazes me how gracefully she’s adapted to her life. She’s such a strong, beautiful animal. And with such a wonderfully friendly, instantly loveable personality.”

The Right Way To Shoot: A Guide To Ethical Wildlife Photography