Although their painful years as ‘dancing’ bears are long behind them, the rescued sloth bears at our rescue centres still bear horrifying physical scars that stand testament to the abuse they suffered at the hands of their human owners. Their canines were shattered, their delicate muzzles pierced with hot iron rods and many were intentionally or accidentally blinded. Invisible but deadly, there is one more remnant of their past that serves as a reminder of their time in captivity – a nearly impossible to detect bacteria that haunts their bloodstream, devastates their lungs and remains one of the most prolific killers of not just our bears, but nearly all captive animals in the world.

We associate the danger posed to captive animals with physical and mental abuse- beatings, starvation, caging and so on, but often overlook the devastating impact of something as seemingly insignificant as human contact. Sneezing, coughing, spitting or even handling the food of a captive animal allows the bacteria responsible for tuberculosis to spread to the animal, in whose body it lives and proliferates.
Human beings are not unfamiliar with tuberculosis, often abbreviated to TB, with recorded cases of the disease in human civilisation dating back ancient Egypt, and over the years, the disease has been studied and documented extensively to curb the spread of this fatal disease, extremely prevalent in India, in human populations.

Veterinary medicine took significantly longer to catch up, and a diagnostic test for TB in sloth bears was only recently developed after around two years of research by the Translational Research Platform for Veterinary Biologicals with help from the Wildlife SOS veterinarians.

During their time as dancing bears, our rescued sloth bears lived in extremely stressful conditions, in cramped and unhygienic quarters with little attention to their nutrition and veterinary care.
“Any or all of these could act as a stressor, making the animal extremely prone to picking up bacteria or viruses from its surroundings,” explains Dr. Arun A. Sha, Wildlife SOS Director of Research and Veterinary Operations, “In addition to which the close proximity to human beings, nearly 40% of whom carry the TB bacteria, makes these bears, and any captive animal, likely to contract TB.” 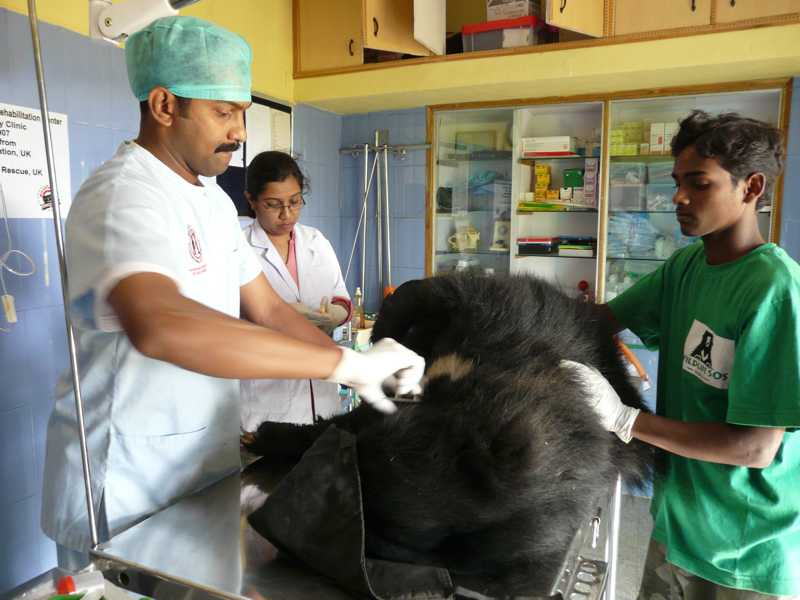 The unfortunate reality remains then that our veterinarians fear that nearly all our bears carry the human strain of the bacteria, either in its latent or active form, a reality made worse by the fact that an infected bear, whose immune system is naturally ill-equipped to deal with the infection, only starts showing characteristic symptoms once the disease has reached the final stages, at which point it is nearly impossible to treat. The disease is more common in weaker bears, and older bears, whose physiological functions are compromised by age.

In consultation with pathologists and pulmonologists from around the world, our veterinarians have developed standard protocol to try to detect and control tuberculosis among the bears they care for. The bears are tested and screened every year or more frequently if they are considered at higher risk, and those that test positive are immediately isolated from the other animals and kept under observation to confirm if the bear has the latent or active form of the bacteria as only the active form is fatal.
“We start treatment immediately,” Dr. Arun explains, “We mixed the drugs in the bears morning porridge, which seemed the easiest way to get them to eat it.”
The initial strategy failed, as the foul tasting pill turned the bears off their porridge, and they refused to touch any food (even their favourite fruit or honey treats!) that contained the drug. The veterinarians had to come up with an alternative, and began consulting with other doctors. It turned out then, that paediatricians were facing similar problems, with young children turning their noses up at the medicine. The development of slightly less obnoxious tasting medicine in syrup form helped immensely, and the veterinarians switched to syrups to treat the bears.

“I’ve been working with these bears for nearly thirteen years now, but it never gets easier,” Dr. Arun confesses, “It’s painful to watch them in isolation, or forcing them to eat something they don’t enjoy, but I need to keep reminding myself it’s for their safety and I can’t afford to get sentimental about it.”

Thanks to the efforts of our veterinarians, the number of cases of fatalities as a result of tuberculosis has decreased in the last year, but it doesn’t make it any less heartbreakingly painful for them to lose bears to this disease, the last remnant of the cruelty inflicted on them by human beings.

“We’ve made a lot of progress in terms of understanding the disease in the animals, and it has certainly helped us save more of the bears’ lives,” Dr. Arun concludes, “But we still have a long way to go.”

To donate to our lifesaving veterinary work and research projects, you can follow this link.