The elephant is a massive bull tusker that towers over the four brothers that claim ‘ownership’ over him. The ownership however, has no supporting documents or paperwork, making it wholly illegal. The elephant is gaunt, with hip bones and a spine that jut out awkwardly from his frame. His feet are in abominable condition – cracks run through his overgrown nails, and his footpads are so painfully swollen that his feet no longer even touch the ground. He is chained constantly, except when he is to be exploited for display at processions or wedding ceremonies for the profit of the brothers. Then two of the brothers do the unthinkable – they cut off a portion of each of the bull’s tusks and sell the ivory on the black market. When the other two brothers find out about the sale, they are furious at being left out, and report their greedy siblings to the local Forest Department. The brothers are arrested and the elephant taken into the custody of the Forest Department. With no available documentation, the elephant remains nameless.

A call late on Saturday evening informs the Wildlife SOS team about the elephant. It is accompanied by two pictures of the seizure – in which a vicious looking spear rests terrifyingly close to his face. With this comes an urgent message. The brothers are planning to appeal in court on Monday. If we don’t get the elephant out by then, we run the risk of losing him forever – he’ll most likely be hidden away, or sold off.

An emergency rescue mission is set in motion, and the team leaves in the wee hours of Sunday morning to embark on the rescue of this elephant, even though we do not yet know his name. The rescue takes place under the cover of darkness to reduce the risk of coming face to face with a hostile mob intent on keeping the elephant in the village. We manage to load him just before midnight, and depart immediately, accompanied by a Forest Department vehicle for security. 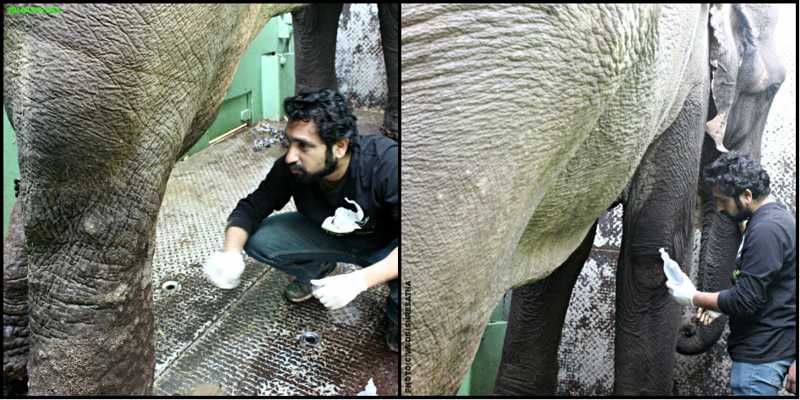 Along the way, he is given delicious treats of fruit and bundles of fresh green sugarcane to munch on through the journey. We stop along the route to clean out the vehicle and give him a delightful hosing down, which he enjoys thoroughly, spraying the water all over the ambulance and on the rescue team! The keepers comfort him and talk to him constantly, giving him a chance to experience kinder human hands – and using the interaction to conduct a full examination of his condition. He has wounds on his tail, legs and feet, terribly neglect feet, and a worrying uniform swelling down the length of his left hind limb. Left eye seems cloudy, indicative of partial blindness.

The journey lasts almost an entire day, and the ambulance drives into the Elephant Conservation and Care Centre in the pitch darkness of the following night. The tuckers trunk sticks out of the top of the ambulance’s carrier walls as he senses the presence of other elephants, possibly for the first time in his life! He seems apprehensive of the new surroundings and unfamiliar smells, sights, and people, but walks into his enclosure and straight up to the sugarcane bundle kept there as a welcome-home present. 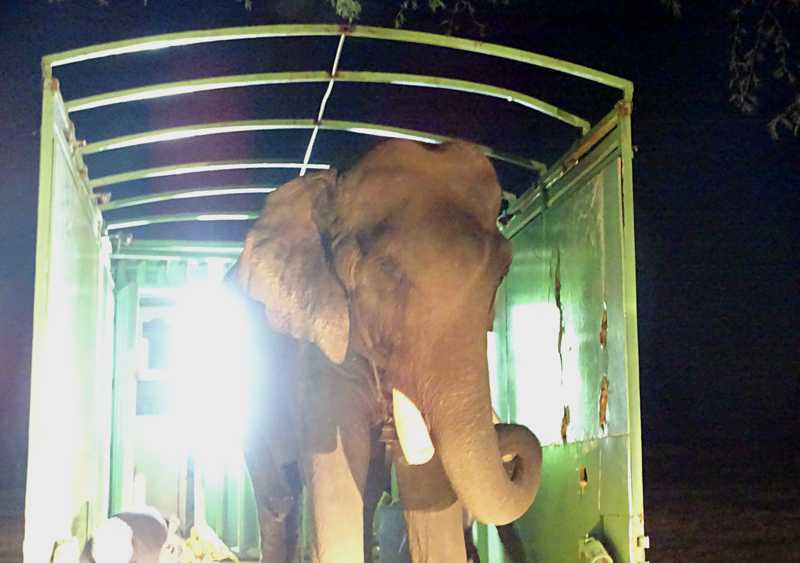 The subsequent morning brings sunshine and a happier elephant, as well as the chance to examine him properly and get started on the vital medical care that he will require to heal from the wounds inflicted on him over the course of his time in captivity. The veterinarians x-ray his feet and the swollen limb to find much to their dismay that he has a minor fracture at the proximal head of his fibula bone. He is started off on a course of calcium and phosphorous supplements, along with painkillers to help ease the discomfort of the injury.  The staff at the centre take time off from their busy schedules to drop by and meet the new member of the family, and everyone enjoys watching him. He has a character completely individual to him, digging pits and throwing the mud on himself, and tucking little stalks of sugarcane between his tusk and trunk to save for a snack later!

It will take a lot of hard work and dedication to get him on the road to recovery, but this amazing elephant now has a family that is determined to help him do so. He also has space to roam free, enrichment’s to keep him active and healthy, nutritious fodder and lots of fruit treats, and a pond for when summer comes and he wants to take some of the weight off his leg, or just enjoy a good relaxing soak! He also has a name now, Sanjay – which all our wonderful supporters picked for him. Sanjay means victorious, and as he stands in the winter sunshine contentedly munching on sugarcane, he really does look like a winner.

Sanjay needs you now more than ever, to rally together and sponsor his care. You can do so by becoming a monthly donor for him at this link.