Just a month after his rescue in the first week of February 2017, Sanjay, formerly known as the Elephant With No Name, has much more than just a name to be proud of. His recovery, both mental and physical, is slowly but steadily progressing under the dedicated care of our wonderful veterinarians and the other staff at the Elephant Conservation and Care Centre.

Sanjay’s feet were in a dreadful state when he first arrived at the rescue centre, with overgrown and cracked toenails and painfully swollen footpads, a result of almost fifty years of neglect in captivity. The vets are busy treating Sanjay’s feet with regular pedicures and nail trimmings, and are thrilled to report that the special medicinal treatment for his foot infections has brought down the infection considerably, resulting in a much more comfortable elephant. Sanjay is slowly beginning to understand the concept of positive conditioning and now knows that if he cooperates during his foot care regime, he has some delicious treats in store for him. He has been prescribed regular dietary supplements to help him with his healing, in particular to enable his recovery from the fracture in his forelimb.

As the weather gradually warmed up over the time since his rescue, Sanjay seemed more inclined toward exploring his pool. Although initially hesitant about entering the water, he eventually ventured into the pool and has fast grown both familiar and fond of the sensation of weightlessness he experiences when submerged in the pond.  The water has, of course, the added benefit of taking the weight off his limbs and the stress off his fractured leg – while providing him endless hours of fun and a chance to cool off. As soon as he emerges from the depths of his pool and ventures back onto dry land, Sanjay immediately tosses mud all over his tall frame, forming a sticky mud pack that cakes to his body, providing a coolness against his skin that he absolutely loves. 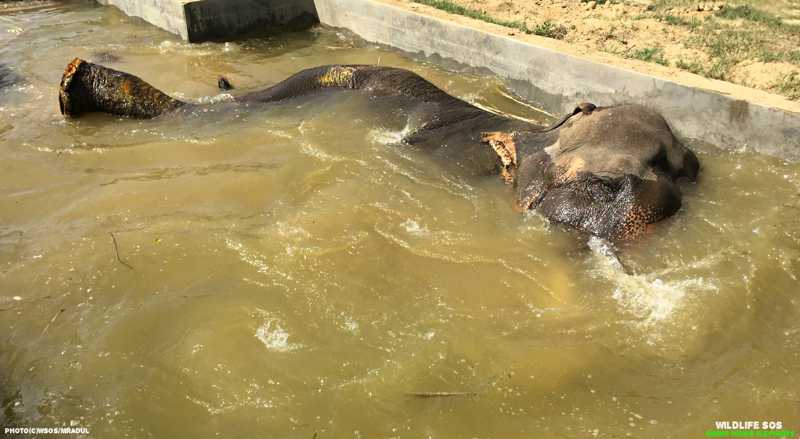 Sanjay is also discovering for himself the joys of good food – thoroughly loving the nutritious diet of green fodder and fresh fruit and vegetables he gets to eat every day. He spends hours happily munching on his sugarcane, as if patiently relishing each bite and refusing to rush through the entire meal in one go. Sometimes, Sanjay will take the final stick of sugarcane and tuck it away neatly between his tusk and trunk to save for a snack later in the day! He loves bananas, and watermelons, but seems wholly disinterested in eating carrots – which is a favourite among the other elephants. When Sanjay spies his keeper approaching with the fruit bucket in hand, he trumpets eagerly as if egging him on till he offers the fruit to the elephant’s eagerly awaiting trunk. Sometimes, even when it isn’t yet time for a fruit feeding, Sanjay will trumpet at any keeper passing by in the hopes that they will sneak him an extra watermelon or banana treat. 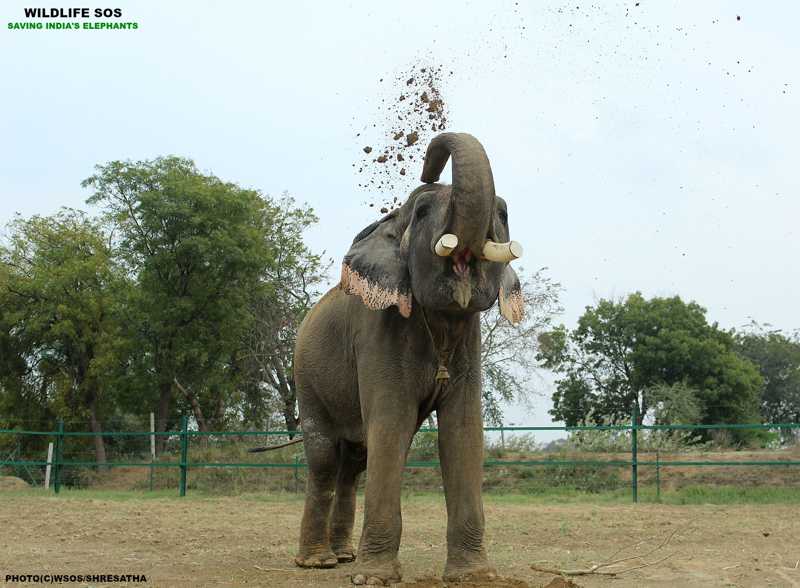 Overall, Sanjay seems to be doing well – and to us, seems much happier with every day that goes by. He is recovering, and loved and is getting the care and treatment he so badly needs after all the abuse he faced in captivity. We’re so honoured to be a part of his amazing journey from suffering to safety, and to play a part in his recovery.