Wildlife SOS works closely with both rural and urban communities across India to educate people, especially those living in man-wildlife conflict zones, about their surrounding environment and the need to protect and preserve the wildlife species that reside in these areas.

As a part of Wildlife SOS’s conservation and awareness initiative program, our team at the Bannerghatta Bear Rescue Centre in Bangalore attended a wildlife awareness camp that was conducted by the Karnataka State Forest Department. The event took place in Devarayanadurga which is situated 65 kilometres from Bangalore in Tumkur district.

The Tumkur region of Karnataka is prone to several man-animal conflicts, especially cases involving sloth bears. Over the years, the natural habitat of these sloth bears has deteriorated due to increasing human encroachment and their population in the wild is threatened, putting them under the IUCN list of Vulnerable species. In fact, some of the wild bears under our care at BBRC have been rescued from such conflict situations. Therefore, the primary focus of this program was to educate the students about conservation ethics and the measures that can be taken to mitigate such encounters in the area. 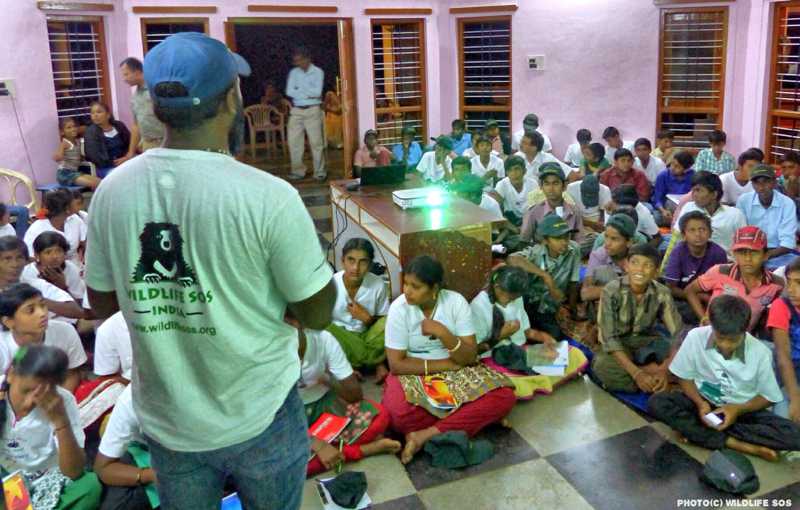 About 75 students from different schools in and around Devarayanadurga were invited to be a part of this event. The Wildlife SOS team was represented by Nishanth Ravindranathan and Manoj Roche and they were accompanied by Divisional Forest Official – M.V Amarnath and Assistant Conservator of Forest- Nagaraj.

The children sat wide-eyed with enthusiasm as the team talked about Wildlife SOS’s efforts towards rescuing and rehabilitating wildlife across India. We went on to give a presentation that addressed the larger issue of how to minimize man-bear encounters. The children were explained some simple forms of avoidance behavior which would prevent them from becoming vulnerable to a possible encounter with sloth bears in their vicinity.

Thus, for example the children could avoid going out during the early dawn and twilight hours without being part of a large group of adults or to wander out into the crop fields alone at night. We also had the opportunity of screening ‘The Last dance’, a BBC documentary based on how Wildlife SOS played a pivotal role in eradicating the inhumane practise of poaching sloth bear cubs from the wild and training them by barbaric means to become ‘dancing bear’ for tourists. 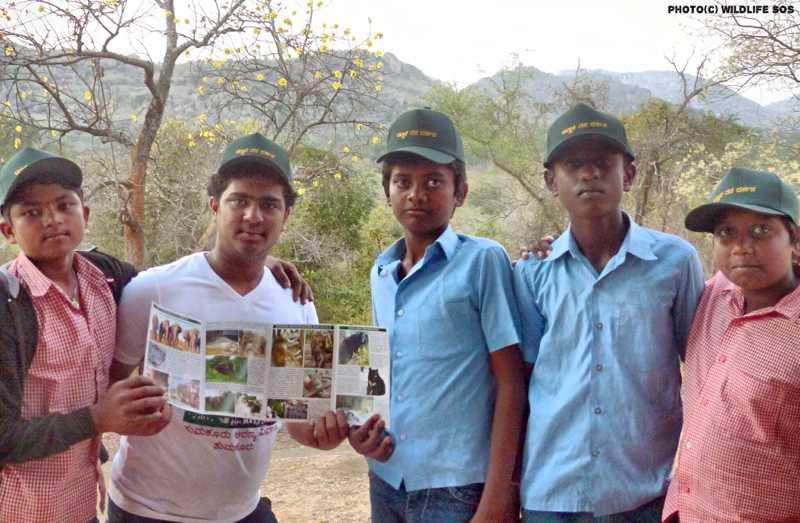 We received encouraging responses and many questions from the students who actively participated because sloth bears were a part of their daily landscape.They eagerly picked up the pamphlets that we distributed, with the promise of sharing them with their families. They also promised that they would share what they had learnt through the course of the program.The awareness camp was a great success and it proved to be a valuable learning experience for both the children as well as the adults who were present.

The Bannerghatta Bear Rescue Centre has been instrumental in rescuing and providing life-time care for over a hundred Sloth Bears rescued from the Dancing Bear trade; from poaching, and Human-Bear conflict situations. With additional retiring dens built and the much required renovations made to the existing dens, the Bannerghatta Bear Rescue Centre currently holds 81 rescued Sloth Bears amidst the lush greens and rocks of the dry-deciduous Bannerghatta Biological Park, making it the world’s second largest rescue centre for Sloth Bears in India and globally too.