Pangolins, also known as ‘scaly anteaters’, are the only mammals to be completely covered in scales. Their distinct features include long powerful claws that they can dig holes with, a long sticky tongue, that may be longer than their entire bodies at times, and of course the overlapping scales that cover their entire body. Eight species of pangolins have been identified by the IUCN (International Union for the Conservation of Nature) and India is home to two of this species -The Indian pangolin (Manis crassicaudata) and the Chinese pangolin (Manis pentadactyla). Both species are protected under Schedule I of the Wildlife Protection Act 1972 and the Indian pangolin is listed as Endangered on the IUCN Red Data List, whereas, the Chinese pangolin is listed as Critically Endangered.

With the exception of wildlife experts, not many know about the existence of this remarkably elusive species. The support they deserve is minimal compared to the support other widely trafficked species like elephants and tigers have amassed in our nation and their plight makes it imperative that we question, why some species are given more importance than others.

A pangolin’s unique scales serve the purpose of protecting it in the wild and it is saddening to know that the same scales are the cause of their being trapped and poached in large numbers. When wild cats (tigers, lions etc.) come hunting, pangolins roll up in a ball, banking on their scales to provide them protection. Their name literally means ‘something that rolls up’ in Malay and thus the pangolins save themselves by using this mighty natural defense mechanism. However, unlike wild cats, poachers can easily capture them by setting up nets and traps. Today, the Pangolin is one of the most trafficked and endangered species which is constantly fighting for survival.

Despite strict and binding laws and regulations, such as the Convention on International Trade in Endangered Species of Wild Flora and Fauna (CITES) prohibiting such trade, they are becoming an increasingly popular species among poachers, due to the ease of poaching them, and the unawareness about the species among authorities and the general public.

According to Wildlife SOS co-founder, Kartick Satyanarayan, not many people know about the existence of such a creature. As a result, awareness about poaching and trafficking of pangolins and need for their conservation, is also severely lacking. These reasons are boosted by the increasing demand for the species, along with a rise in the buying and selling prices of the same. Pangolins are smoked or dug out of their burrows and dipped in boiling water. This is done in order to extract their much-in-demand scales. It is an organised trade in India with villagers helping poachers locate the pangolins. Code names such as ‘football’ are often used for the poor unassuming creature. 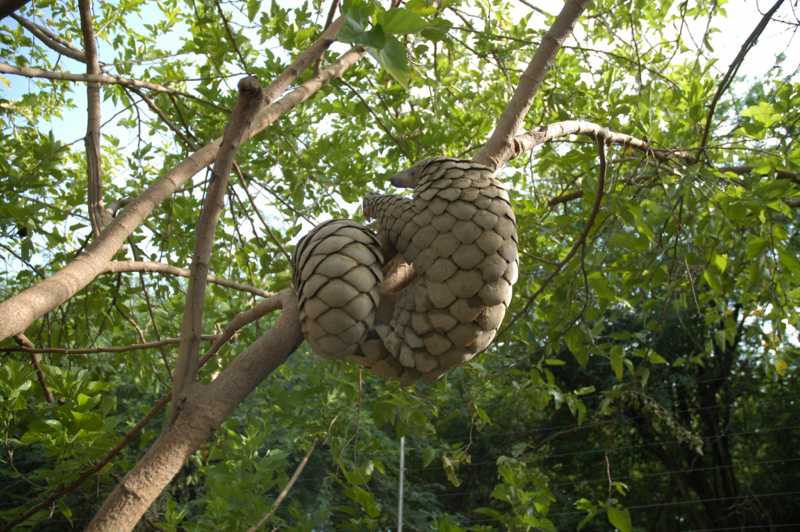 India is unfortunately becoming a major supplier of pangolin meat and scales across illegal markets in China, Vietnam and Thailand. There is a great demand for pangolin meat in Southeast Asian countries, where it is a delicacy. Moreover, their blood is believed to have aphrodisiac properties and their scales are used in traditional medicine to ‘cure’ various diseases, including headaches, asthma and certain cancers.  Local trade of pangolin meat and scales have also been reported in the states of Andhra Pradesh, Kerala, Tamil Nadu, Orissa, Manipur, Tripura, Assam, Nagaland and West Bengal.

Studies have found that pangolins reach sexual maturity at the age of two, and only give birth to one offspring throughout their lives. Some instances in Africa suggest that some pangolins may give birth to two, or even three, ‘pangopups’. This may be cited as one of the reasons why halting the poaching and trafficking of this species is of great importance.

Recent news reports alarmingly suggest than pangolin trafficking is much on the rise. In 2017, TRAFFIC & IUCN published a comprehensive summary of seizures and trafficking routes from 2010-2015 which highlighted the truly global nature of the trade, implicating 67 countries! According to the report, 20 tonnes of pangolins and their parts ae trafficked internationally year. (https://www.traffic.org/what-we-do/species/pangolins/)

Pangolins are the most widely trafficked mammal, with elephants most probably garnering the second place. The question to ask here is why exactly is this not a bigger conservation issue. Why have such few people heard of the word ‘pangolin’? Why are these creatures so underappreciated? And most importantly, what can we and the government do, to help resolve this issue before the Indian pangolin becomes critically endangered.