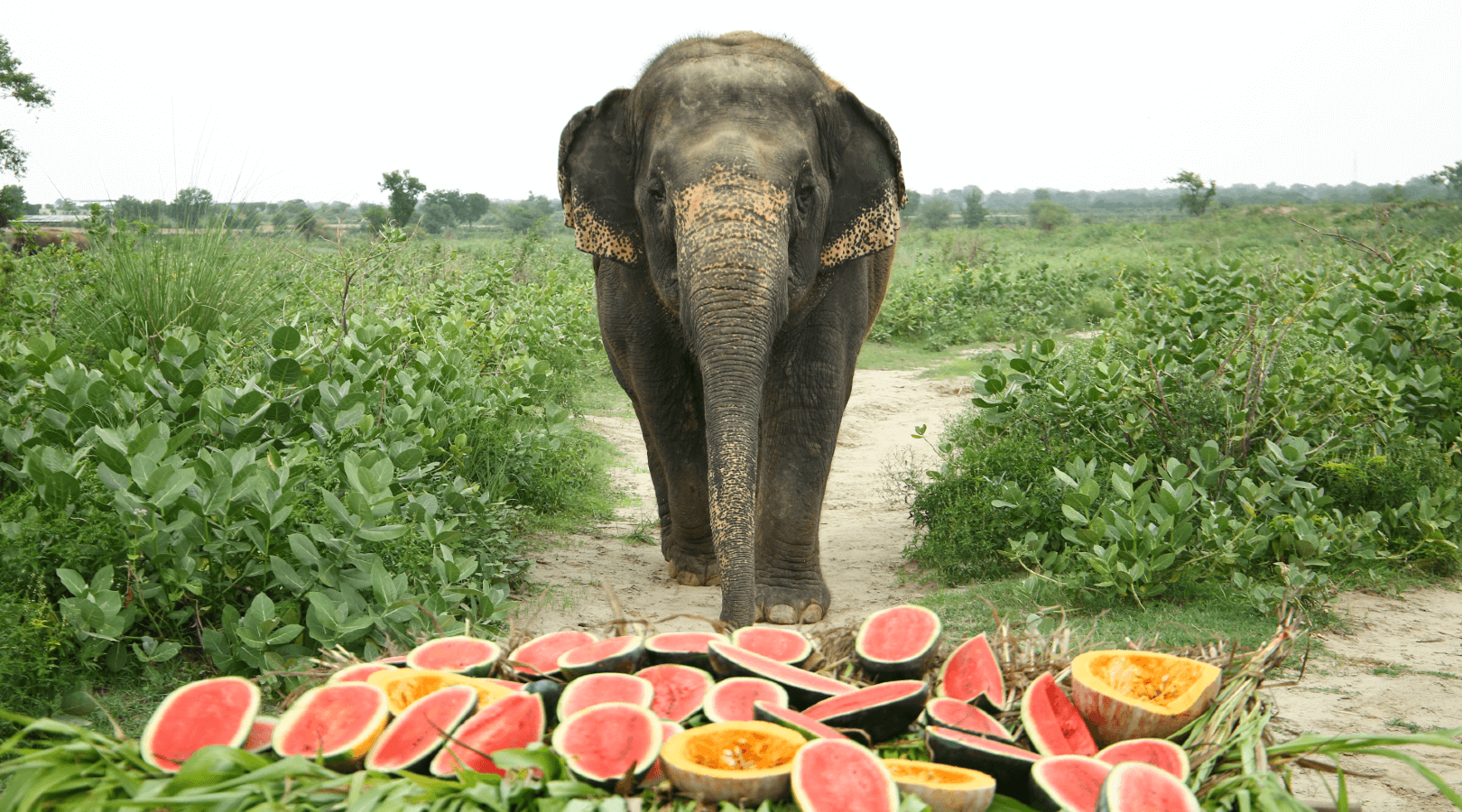 Fondly known as the “munchkin of Wildlife SOS”, with her short and pudgy stature and the perfectly depigmented borders of her ears, Laxmi has been winning hearts since the day she arrived at the Elephant Conservation and Care Center.  Laxmi’s rescue was an extremely unique one for all of us to witness, at Wildlife SOS.

Wildlife SOS has rescued elephants from deplorable conditions of abuse that they suffered in circuses, as begging elephants on the streets, at the temples, with their weak bodies bearing the brunt of exhaustion. Understanding Laxmi’s condition was crucial as she was a morbidly obese elephant, at the risk of suffering from serious joint conditions as well as pulmonary diseases. She was also forced to beg outside temples in the bustling city of Mumbai, Maharashtra. The endless walking and the overbearing weight of a carrier caused severe physical distress to Laxmi, but what made it worse was the unhealthy diet that she was forced to survive on.

It is believed that Laxmi would be fed as many as 200 burgers (vadapavs) and sweet temple offerings every day! An unnatural component in an elephant’s diet, this led to Laxmi gaining an abnormal amount of weight and reaching the level of obesity that caused severe stress to her joints. Laxmi, at the young age of 18 years, was already suffering from a serious condition of osteoarthritis and exhausted joints.

When Laxmi arrived at Wildlife SOS, our veterinarians and elephant care staff were concerned for her weight and the amount of stress it would be causing her limbs. For veterinarians who had expertise to make an elephant gain weight and strength, Laxmi introduced them to a new approach – losing weight to avert health complications!

Facing this peculiar situation, our veterinarians charted out a diet for her to incorporate greens in her diet, as a first. Laxmi, being a complete foodie at heart, found the choice of switching to green fodder from sweets and burgers a non-negotiable deal. She would run, and continues to run, in the stark opposite direction of cauliflower and cabbage! The moment her keeper brings the bucket full of beetroots, cabbage, pumpkins and gourds to her side, Laxmi is vocal about her dissent and will stand with her back to her keeper.

There is nothing that Laxmi loves more than munching on bananas, not just one or two but the bunch of them! Quick to devour and eager to ask for more, her delectable fruit platter of watermelons and bananas is the only part of her diet which she does not fret from.

Of her many quirks, the most loved one is her unique trumpet, which can essentially be considered a high-pitched squeak! For all of us at the Centre, the moment we hear this excited squeak, we know that it is time for her walk or her relaxing long bath. Her innocent enthusiasm has stemmed from the recovery that she has undertaken with us at the Wildlife SOS Elephant Conservation and Care Centre.

Laxmi presently weighs around 4600 kgs and receives medicated footbaths of Epsom salt, aloe vera gel and turmeric for her delicate footpads. She also undergoes regular sessions of toenail trimming, which is an essential part of our elephants’ foot care routine. Overgrown toenails make it extremely difficult for elephants to walk as it creates pressure which will directly harm the bones of the foot, which furthermore leads to cracking of toenails causing immense pain to the elephants. What keeps Laxmi steady and cooperative in the toenail trimming sessions is the steady supply of treats – from peanuts to jaggery to dates!

Our enrichment team has unique challenges when it comes to making enrichments for our dear Laxmi as her favourite part of it all is to untie the knots! Laxmi will spend dedicated amount of time untying the knots from which her enrichments are tied to, her dexterous trunk picking and pulling at the strings, tugging each end, to unfurl the fresh green fodder out of it.

Prior to her rescue, having lost her companion elephant to the oppressive routine of being a begging elephant, Laxmi’s psychological healing was largely affected until she met Bijli and Chanchal, our rescued pachyderms at the Elephant Conservation and Care Centre. The trio enjoys long walks along the riverside of Yamuna, occasionally enjoying a dip, especially in the soaring summer months.

Her keeper speaks fondly of her when he says that “Laxmi is an extremely lovable elephant, she loves food! I feel very sad that she suffered the way that she did in her past but today, she enjoys splashing around in her pool in her enclosure. She is very close to Bijli and Chanchal, and loves her walks with them.

On completing 7 years with us, we knew exactly what to do to make our Laxmi happy! Our elephant care staff organised a lavish spread of her favourite fruits, minus the presence of any vegetable that she isn’t fond of. She was delighted to find the jumbo feast waiting for her when she returned from a morning stroll with Bijli and Chanchal. She immediately scooped up the watermelon and pumpkin pieces and devoured them within seconds!

Consider becoming a part of Laxmi’s healing journey by being a sponsor for her, and supporting her under our care at the Wildlife SOS Elephant Conservation and Care Centre, where she takes strong steps to recovery!