While people in the city enjoyed a relaxing and rejuvenating Sunday, a helpless leopard’s life was at stake when it mistakenly ventured inside a field in Sadullapur village, Greater Noida. The Wildlife SOS Rapid Response Unit receives calls round the clock from compassionate people and works tirelessly to provide critical aid to animals in distress, 24 hours a day. Thus, when the team received a call from the Uttar Pradesh Forest Department (UPFD) about a leopard in need of help, the team jumped into action immediately. A five-membered team quickly gathered the essential rescue equipment including safety nets, restraining equipment and a trap cage, to embark on an hour-long journey to reach the site. Time is always of essence when rescuing wild animals, especially big cats.

Despite being capable of inciting a frightened yelp from people, leopards are extremely shy wild cats and avoid coming into contact with humans. Leopards have a highly adaptable nature that enables them to easily cohabit alongside human-settlements without causing any trouble. In fact, they change their peak activity times to the wee hours of the night so as to avoid interactions with humans. However, the shyness of leopards is more often than not overlooked and their sightings can stir panic and mayhem amongst people.

The seven-year old leopard was first spotted by a vigilant villager at one of the wheat farms in the village of Sadullapur, who quickly informed the local officials of the Uttar Pradesh Forest Department about the animal. By then the leopard had swiftly climbed over a few empty homes in the village to finally halt at the lentil farm in one of the houses.

Seeing the large strength of the crowd that had gathered around the location, the Forest Department officials thought quickly on their feet and with the help of Uttar Pradesh (UP) Police and District Administration, they formed a well-guarded circle around the vicinity of the leopard to prevent on-lookers from agitating the leopard. An agitated animal is more likely to act defensively and attack a human, that can further provoke the people to act violently against the animal. 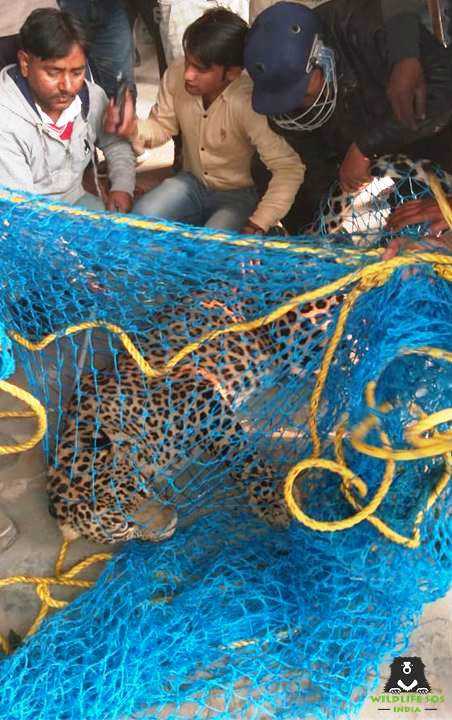 Team from Wildlife SOS and tranquilizing specialists from the Delhi Zoo soon arrived at the rescue site and began surveying the area for the leopard. Leopards camouflage easily due to their pattern that made it difficult for the team to sight it from their rescue vehicle. As such, the team had to move on to their plan B and survey the site on foot.  It was really dangerous but much needed. After hours of careful surveying, the leopard was finally spotted sitting comfortably next to a wall at the lentil field that made it easy for the veterinarian to tranquilize the leopard using a sedative laced dart, and to transfer it safely inside a cage.

The leopard was then taken to the Surajpur Nursery where it was kept for overnight observation. After careful observation , the veterinarians declared the leopard to be fit and healthy to be released into the wild again.

Thoughtful rescues such as these help to mitigate human-wildlife conflict, which are now a growing concern in India. This brilliant collaborative effort of different organisations sends across an important message that the fauna of India is vulnerable and needs protectors. Furthermore, such rescues give people an opportunity to learn that instead of acting negatively towards a wild animal, a peaceful solution can be reached that is conducive for both the animal and the people.

The Indian leopard (Panthera pardus fusca) is a Schedule I species, protected under the Wildlife Protection Act, 1972 and is listed as ‘Vulnerable’ under the IUCN Red Data List.