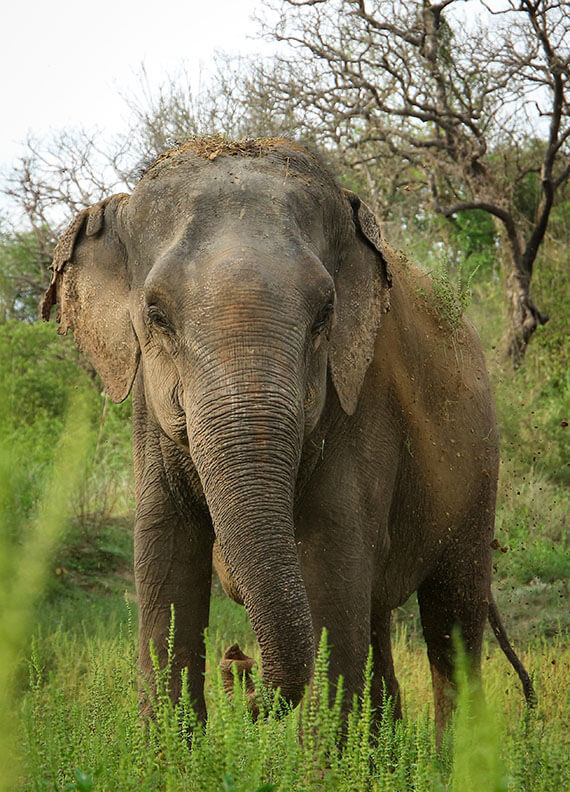 Age at the time of arrival: 50 years-old

Recognisable traits: Significantly torn right ear and pronounced depigmentation on her trunk; complete opacity in her right eye and partial opacity in her left eye.

Present health condition: Receiving medicated footbaths for her worn-out footpads and wounded cuticles; receiving treatment for the toenail abscesses in her forelimbs; undergoing treatment for an abscess behind her left ear.

Favourite activities: Enjoys her long walks in the thick, forested area of the Centre with her companion, Jasmine, who never leaves her side!

Background story: Life has been unkind to Daisy, to say the least, as she has spent most of her life walking around the narrow and overcrowded streets of Delhi. In a city that barely has enough moving space for humans, the existence of an elephant would often confuse people, and yet nobody would step up to speak for her. When Wildlife SOS rescued Daisy in 2019, our elephant care team and veterinarians were shocked upon witnessing Daisy’s condition. She was completely blind in one eye and losing vision in the other, and her body was a host to the wounds and scars of her brutalizing past.

A sharp bull-hook to guide her on the chaotic roads of Delhi, full of shards of glasses, blaring horns and sharp pebbles, but that was the ordeal that Daisy had to face each day. Her toenails were ridden with abscesses and wounded cuticles owing to the lifetime she had spent walking on hot concrete. In addition to this, her foot pads were torn thin and were deteriorating with each passing day. When not walking on the streets, Daisy would be tethered to an open field close to the polluted riverbank of Yamuna and would feed on whatever was made available to her, thus putting her health at a severe risk.

Wildlife SOS, with the help of Delhi Police and Forest Department, rescued Daisy from this lifetime of abuse, after the Delhi High Court declared that all captive elephants in the State were to be rehabilitated with immediate effect. As Daisy took to her new surroundings at the Wildlife SOS Elephant Rehabilitation Centre in Haryana, she also was welcomed by her herd of three other elephants that were rescued by Wildlife SOS from situations of distress and abuse. Among rumbles and affectionate trunk hugs, Daisy also embarked upon a journey that would aid her psychological well-being as she had lived her life in isolation, away from her own kind.