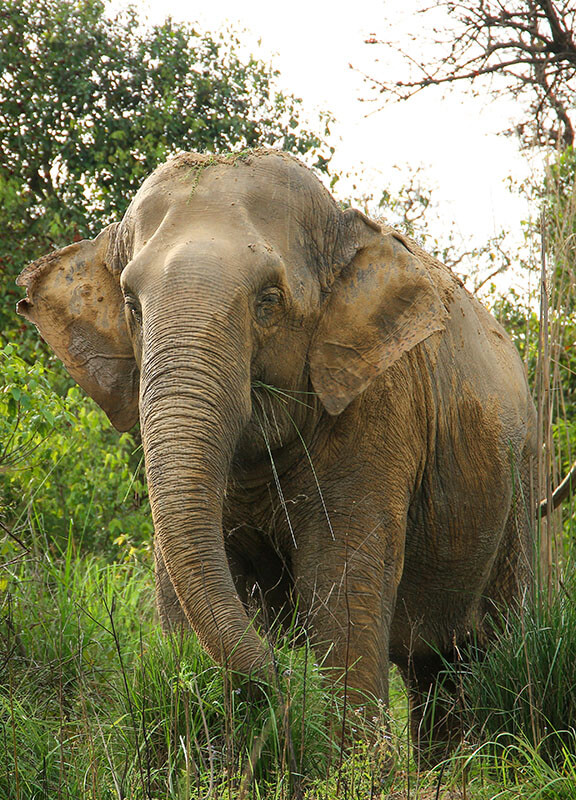 Age at the time of arrival: 55 years-old

Recognisable traits: Tallest elephant at the centre and the matriarch of the ERC herd

Favourite activities: Leading the herd for long walks in the forested area of the Centre

Background history: The unforgiving streets in a small town of Haryana would spot a tall, weak elephant exhausted and dragging herself through the mundane routine that her cruel owner put her through. With little sustenance and no proper medical care rendered to her, Erika would spend her day walking and would be restrained to a corner at night with not even enough space to lie down. When Haryana Forest Department and Police authorities apprehended Erika’s owner for illegally owning her, she was finally free from her abusive life after a series of hindrances, in 2013 and rehabilitated by Wildlife SOS at the Elephant Rehabilitation Centre in Haryana.

An illegally owned elephant, Erika suffered for most part of her life and grew weak in her spirit and strength when her owner made her walk on unnatural surfaces that gravely deteriorated her joint health. She would not be allowed to rest and would be tightly restrained to a concrete corner in an open field bearing the direct harshness of the seasons – be it summers, storms or bone-chilling winters! Upon learning that Erika is not a legally owned elephant, law enforcement authorities and the Forest Department sprung into action to apprehend her owner but he managed to flee, while making things difficult for everyone. A team from Wildlife SOS and the Haryana Forest Department as well as the Police worked day in and out to find Erika.  Wildlife SOS deployed informers on the ground and were finally able to rescue her as she was found abandoned by her owner.

In 2013, Erika took her first steps to freedom, without any chains and ropes and was bemused with the lush green surroundings at the Elephant Rehabilitation Centre. She was welcomed by Ella who was also rescued on the same day and the two took an instant liking to each other, making us believe that they ought to have crossed each other’s paths in their past life as a begging elephant. Erika received intensive treatment for the serious condition of her foot pads and joints and continues to be treated for her arthritic limbs. Her psychological healing has largely been aided by the company of the herd that has now grown to five elephants and will be spotted foraging and walking around the forested area of the Centre!