In recent years, with the rise in economic growth and rapid infrastructural development in India, the road and railway transport network has been given a much needed makeover with the construction of new expressways, railway tracks and expansion of existing highways. However, what is seen as a blessing for the society is also a bane for our wildlife that is adversely affected by loss of forest cover, depletion of natural prey base and habitat modification.

With rapid development and urbanization taking precedence over wildlife and forest conservation in the country; we are compromising and gradually even depriving India’s precious wildlife of its forested home. This in turn has led to severe ecological impacts and fragmentation of natural habitats, especially in urban settlements. With little or no provision for wildlife corridors or underpasses in and around city limits that allow urban wildlife to cross roads or railway tracks safely, many unsuspecting animals put their lives at risk while navigating the roads and often fall victim to vehicular or train collisions. Such callousness not only puts the life of the animal at risk but also poses a threat to the safety of humans.

In a recent incident in Delhi, an adult male nilgai was left struggling for its life just a few kilometres away from the Shahdara Railway station, after it was hit by a speeding train. The impact of the collision left the large antelope with a broken left hind limb and external injuries on the body. Shocked by the sight of the nilgai lying almost unconscious on the side of the rail tracks, several concerned passers-by decided to lend a hand and help the animal. In the meantime, they also alerted the Wildlife SOS 24 hour helpline which provides round the clock animal ambulance services to wild animals in distress across Delhi NCR. 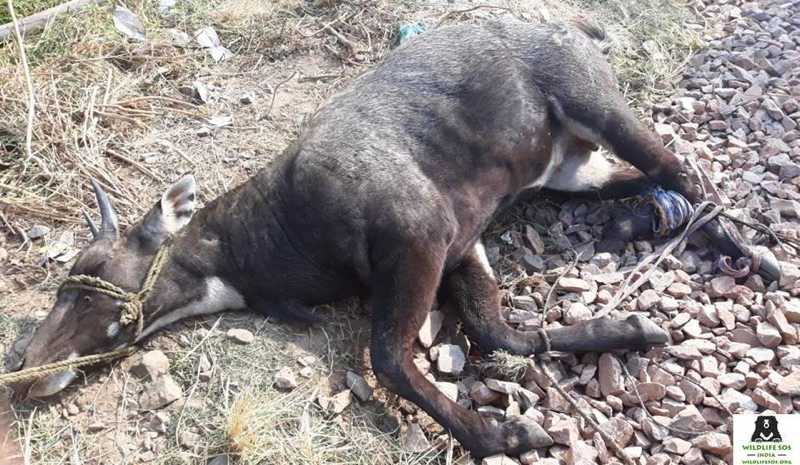 Equipped with necessary equipment, a three member team rushed to the location. The rescuers were careful not to cause the traumatized animal any further stress and it was transferred to the our care center for urgent medical intervention. The Nilgai or Blue bull (Boselaphus tragocamelus) is the largest Asian antelope and this species is endemic to the Indian subcontinent. It is protected under Schedule III of the Wildlife Protection Act, 1972. The critically injured nilgai is currently undergoing treatment but the prognosis is grave. Despite our best efforts, the animal later succumbed to the injury and pain.

In the past, several jackals, civet cats have been found injured or dead in and around the national capital while crossing roads and railway tracks. If you come across any bird or wild animal that is, distressed, injured or caught in conflict situations, please do alert us on our 24-hr helpline number (9871963535).