Team Wildlife SOS recently conducted a workshop on man- wild animal conflict mitigation for the staff and students of Department Of Environmental Sciences, Bemina Degree College in Srinagar, Jammu and Kashmir. In past two years (2014-15 & 2015-16), 43 persons were killed and over 516 others were  injured in attacks by wild animals in Jammu & Kashmir while Government admitting that the Man Wild animal conflict has increased in the State. The incidents of conflict have increased owing to the demission of forest cover, change in land use topography, grazing in forest areas, fragmentation of natural habitat, decrease in prey base and biotic interference in habitat of wild animals.

Keeping in view the current scenario, the workshop aimed to raise awareness about man-wild animal conflict and its mitigation in the state. It started with a lecture by Dr. Musbasshir, Head of Environmental Science Department of the college, who spoke at length about the damage that human activities are doing to the environment and ecosystem and how rampant habitat encroachment has led to increasing instances of such incidents. Aaliya Mir, Wildlife SOS’ manager for the state of Jammu and Kashmir then presented her views on the various aspects of human-wildlife conflict and how “we” as an educated society can play an effective role by way of spreading the messages which will help in mitigation of such conflict. She also spoke about her experience in this area which spans to almost a decade and explained the various challenges faced in addressing this issue and talked about the various misconceptions people have about wild animals. 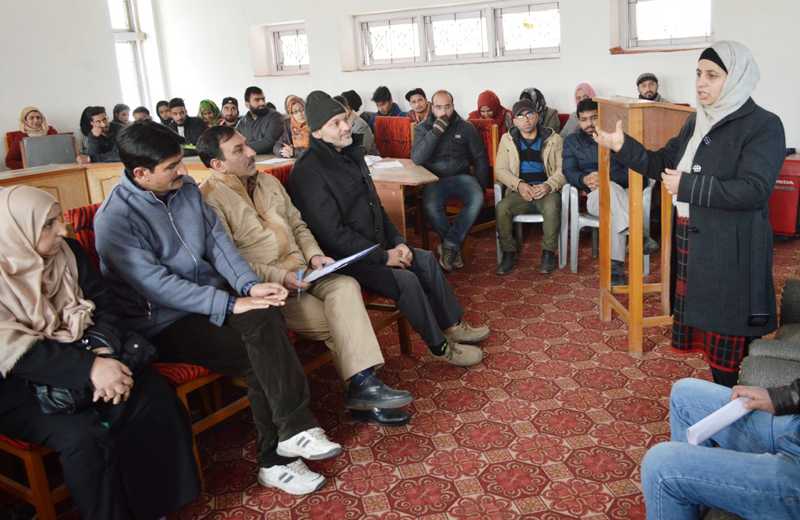 Following this, Tahir Gazanffar, project coordinator with Wildlife SOS spoke on various indigenous techniques of reducing damage to life and property due to the ongoing conflict and immediate measures of reducing retaliatory damage to the wildlife. He also enlightened the keen audience about the unique significance of each animal in the ecosystem and how disturbance in the delicate ecological balance is detrimental for both the environment and human beings in the longer run. Various factors affecting wildlife directly or indirectly were discussed along with the efforts which the society can collectively take in order to save the precious biodiversity of the State. The man-wild animal conflict which primarily is because of Asiatic black bears in the valley was talked about and the role of Wildlife SOS in mitigating the conflict was highlighted. The success stories of Wildlife SOS utilizing awareness as a tool of conflict mitigation was also discussed with the students.

This was followed by an interactive session where a very curious and aware audience expressed their views and suggestions about how the issue could be addressed and also posed many challenging questions to the speakers. The participants enquired about the role of Asiatic Black Bears in the ecosystem, and discussed the human role in mitigation of man animal conflict and how to handle a situation where you unexpectedly come across a wild animal. Lastly a vote of thanks was given by Dr. Tasmia who thanked Wildlife SOS for organizing the workshop which has brought in light about what a common person can do to bring down this alarming situation to a minimum level possible wherein humans and wild animals can live in harmony. She reiterated the Slogan “Live and Let Live”