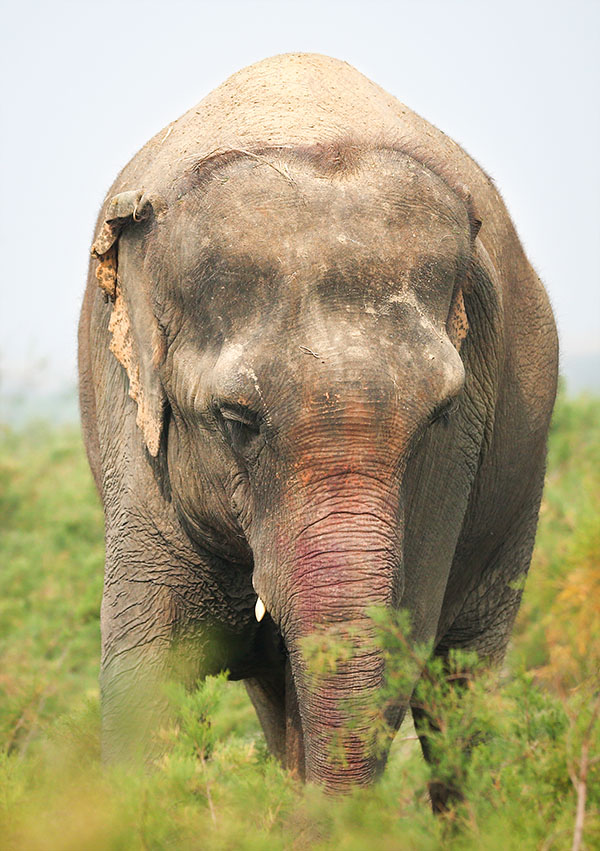 Age at the time of arrival: 40 years-old

Recognisable features: Slight depigmentation on the borders of the ears, hole in the right ear due to piercing, lifts her forelimbs due to pain and discomfort, light-coloured eyes with specs of green

Present health condition: Delicate and torn foot pads indicating presence of embedded debris, overgrown and cracked toenails, chronic hip abscess on either side of her rump, poor body composition due to malnourishment

Closest to: Not introduced to a herd

Favourite activities: Enjoys napping on her mud bed under the sun and actively uses her trunk to survey her surroundings

Background history: Adorned with heavy, ornamental garbs, Emma was abused as a processional elephant who spent most of her life walking on concrete surfaces and hot tarmac roads. Emma would be painted with bright colours to make her appear visually appealing. Upon being intercepted by the Forest Department, it was revealed that she walked over 500 km with no valid documentation. Emma was seized and transferred to the Wildlife SOS Treatment Unit for intensive care and treatment. | READ MORE ABOUT EMMA

The ordeal of walking on blazing tarmac roads, stone surfaces and narrow streets of towns took its toll on Emma’s poor health condition, having undergone the routine for over four decades. She understood that help was never coming her way, which is why she developed the habit of lifting her weak, injured forelimbs to manage her pain and discomfort. Her delicate foot pads were torn thin with pebbles, metal scraps, broken glass and rusted nails, and she developed a condition of necrosis that intensified as no medical treatment came her way. To add to her misery, she was forced to consume alcohol by her abusive owner to alleviate her pain and continue her torment of walking.

Emma was being transported illegally across state borders when the Jharkhand Forest Department interrogated her owner to find that he held no valid documentation. She lifted her feet, one after the other, in quick succession which indicated that she was in unbearable pain. Wildlife SOS sprung into action when the Forest Department reached out to us to transfer Emma to the Treatment Unit for long-term intensive care. A preliminary team consisting of a veterinary doctor reached Emma’s location and were shocked to see that there were  nails, pebbles and shards of glass embedded in her delicate footpads.. In the meantime, the Elephant Ambulance was prepared with necessary equipment, blankets and sugarcane to begin the 1100 km journey from Jharkhand to Mathura. As Emma had never been on a vehicle before, she was anxious to unfamiliar faces but constant coaxing from our elephant care staff and a three-hour long effort spelled success for us all. After two whole days and nights of travelling, she finally took tender steps to freedom at the Treatment Unit.

Emma will require intensive foot care therapy as her X-Ray indicates the presence of debris. Along with this, she will be rendered medicated foot soaks for her torn foot pads and wounded cuticles. Additionally, she is also administered oral medication for pain management and to strengthen her joint muscles. She has shown courage that astounds us all, as she naps during treatment or plays around with her support pillows!