On the 19th of May 2019, the Garden City of Bengaluru awoke with cheer for over twenty five thousand registered runners in the TCS World 10K Bengaluru Run 2019, who ran in various categories of 10K, 5K, and 4K races from the Sree Kanteerava Stadium which is situated in the heart of the city. Recognized as the largest mass participation event in South India, the occasion has seen participation of top elite athletes from around the globe such as, the former World No. 1 Arantxa Sanchez was the International Event Ambassador. At the age of 17, she became the youngest player ever to win the 1989 French Open defeating the world No. 1 and two-time defending champion Steffi Graf in the finals.

What started out as a running event twelve years ago is now more than just a race. It is a celebration of spirit and fitness that underlines and showcases the passion and zeal of the citizens of the city. The race serves as an ideal platform for individuals and corporates to raise funds for NGOs and support various causes. This year, Wildlife SOS was introduced into the joy of running and participated in the Bengaluru run as well. The funds raised in the fundraising drive will be utilized for the care and treatment of the Sloth Bears at our rescue facility.

Our team encouraged our team and a few supporting runners who took part in different race categories such as the Open 10K run, Majja run and the Senior Citizens’ run as we joined thousands of Indians to run in the race, supporting a cause we cherish and work towards. We were happy to complete the race for our Sloth Bears and expand our reach among all who took part in the occasion.

After successfully ending the centuries-old tradition of “Dancing Bears” that inflicted terrible cruelty on the highly endangered sloth bears, we continue to provide medical treatment and care for over 280 Sloth Bears that will not be able to survive in the wild after being hand-raised by humans in captivity. These rescued animals are now living peacefully in four large rescue centers across India, enjoying a life where they’ll never again have to endure such pain. We have four centres, namely, Agra Bear Rescue Facility, Bannerghatta Bear Rescue Centre, Van Vihar Bear Rescue Facility and the Purulia Bear Rescue Centre. Despite this joyous achievement, it is still critical that our anti-poaching efforts continue, the ongoing poaching, combined with habitat encroachment, continues to pose a serious threat to an already depleting population in the Indian Sub-Continent. Our team does its best to spread awareness about the vanishing species and acknowledge their importance and role in the ecosystem in such events like the Bengaluru run. 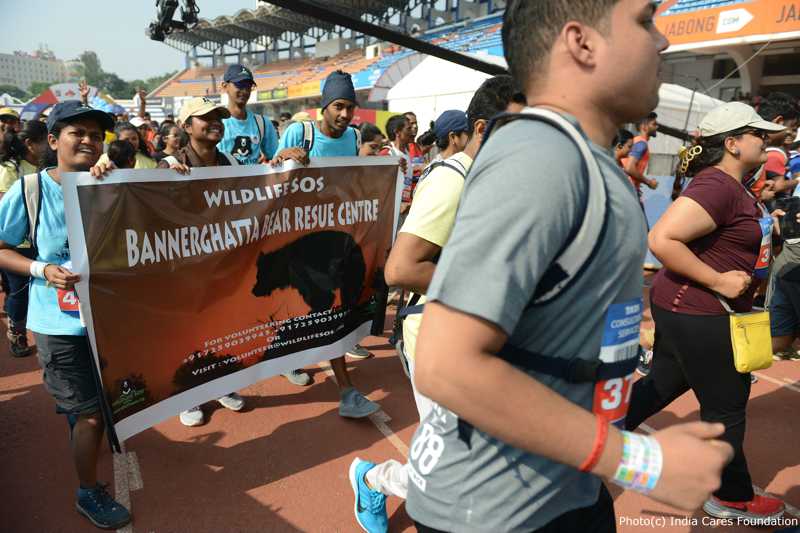 Wildlife SOS is extremely thankful to India Care Foundation and Procam for supporting us and for providing us with such a wonderful platform to reach out to more like-minded people who want to spread awareness about our work and cause. We had a wonderful time and experience being a part of this fun-filled event. And are delighted to have many new faces supporting our cause!

Be a part of the next Half Marathon in Delhi this year and support us!