When rescuing ‘Dancing Bears’ from Kalandars, one of the most heartbreaking things was to find young cubs as captives.  Suri was one such cub we found. Rescued in 2007, Suri’s condition was very poor, he was malnourished, and the penetration wounds on his muzzle were fresh and bleeding. It was dreadful to imagine, the agony that this little cub had gone through and how psychologically scarred he must have been at the time we rescued him.

It has been nine years since the darkness has lifted off Suri and he has grown up to be a wonderful, happy and affectionate bear. The staff at the Agra Bear Rescue Facility made sure that Suri got the love and care he deserved and more importantly he had to be taught how to be a bear again. Thankfully, the result has been delightfully positive.

Suri is very jolly and playful but also very diplomatic. He plays with all the bears and doesn’t interact with any one bear in particular. He also loves to play with all kinds of enrichments. Curiosity is a trait that has helped Suri evolve and learn a lot. He loves to explore different area in the facility or new enrichments. He also likes to roam around in the fields and is crazy about watermelons. 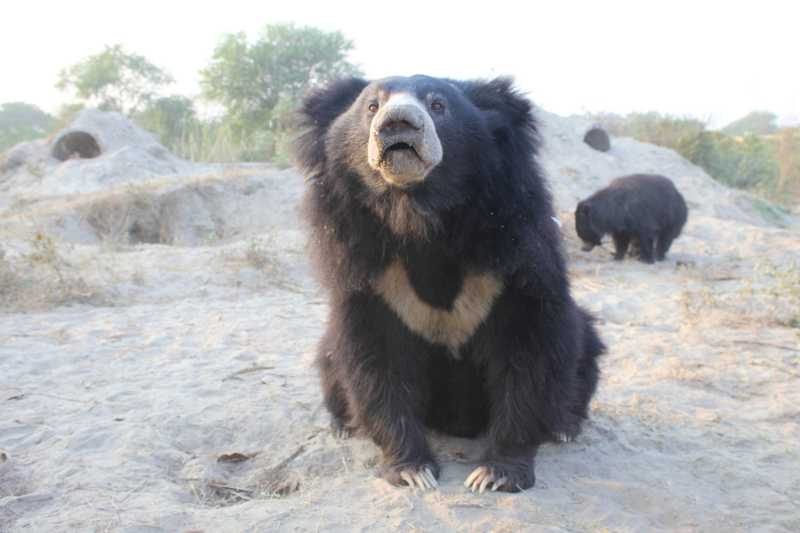 Even though Suri is very energetic, he is essentially docile by nature. He has two keepers, Randheer and Ishrafil and is very fond of both. They too enjoy pampering him loving hugs and yummy treats.  It is heartening to see the child in Suri alive and well, happy and loved.

If this is a story with a happy ending, it is because of your generosity and kindness. Your continued support to us in our endeavor to make a difference has made this life of freedom and happiness for Suri and many other bears. If Suri could know about your love for him, he would happily invite you to share his watermelons and also give you bear hugs.

You can see him enjoy his ball enrichment here;