Winter had barely left Mathura in February 2015 when Lakhi arrived at the Elephant Conservation and Care Centre – she was over 60 years old, a blind former-begging elephant rescued from the streets of the city of Pune. She seemed timid, and nervous – blindness is an added burden for captive elephants that can never really tell where the next blow will come from. The touch of human hands caused her to recoil fearfully, too scared to even investigate new smells or people. Then Lakhi met Asha.

“I’ve never seen two elephants get along so spontaneously,” her mahout Babulal recalls, “They were complete strangers, but from the first day itself, they knew – and we knew – this friendship was going to be something unlike any we’d ever seen before.”

With Lakhi under her care, Asha blossomed into the matriarchal role she seemed destined for, standing protectively over Lakhi when she lay down to rest, and using an astonishing array of sound cues to call her and comfort her.

We called Lakhi the ‘banana thief’ because she made her adoration for the fruit obvious from the day we first met her, sneaking her trunk out towards the smell and gingerly plucking her favourite treats from the bundle and swiftly putting them in her mouth. Her keeper was always happy to oblige, and would call out to her when he approached with a bunch of bananas, breaking them off as he fed her each piece and talked quietly to her. Between her keeper and Asha, Lakhi’s world came alive through conversations, in human voices and elephant rumbles, and through the myriad of new smells and sensations she experienced over her time at ECCC. She discovered the soothing effect of cool water against her skin and the weightlessness of being in the water, the cooling, the delightful roughness of tree bark against itchy skin, the warm sun on her back and the coziness of her winter blankets when the temperature dipped. Slowly she learned what kinder hands felt like, allowing her keepers and the vets to run their palms along her trunk as they spoke to her, or guide her gently as they went on long walks. I think though, the sensation that gave her the most joy though, was always that of Asha’s trunk running along her face and trunk, touching her lightly out on walks just to reassure her that she was there and keeping a watchful eye on her. 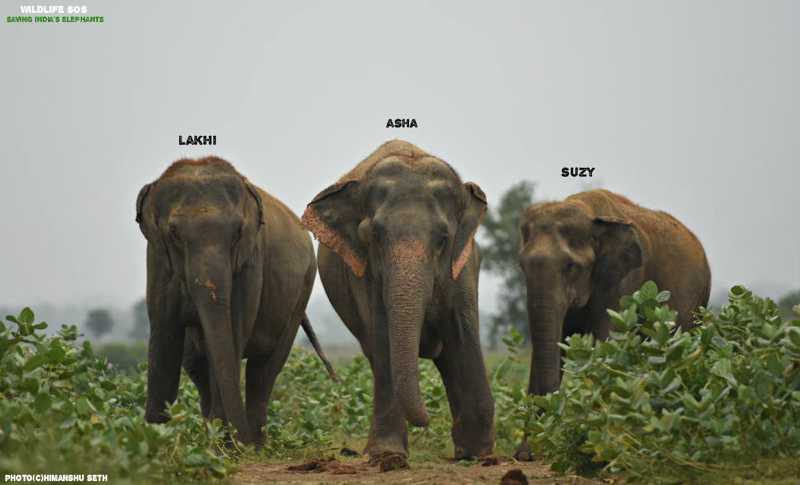 When Coco came, Lakhi’s world grew even brighter. Timid and fearful little Coco had been deprived a mother for her entire life, but Lakhi stepped into the role with absolute ease. She never hesitated to seek Coco out when the younger elephant cried, or to stay close by her side out on walks, occasionally enveloping the smaller elephant with her trunk in a safe embrace. As if taking a cue from Asha, Lakhi made sure that Coco always felt safe and loved, and stood protectively over her whenever she lay down for a nap.

Lakhi was an incredible elephant – she was tall, but she held her head up high, which made her look even more so. Despite her gaunt frame, it felt like she took over the space she was in, with an aura that engulfed you and instantly put you at ease. She was calm, and enjoyed her walks and baths so much that it was incredibly easy to work with her. New mahouts that joined would always start off working with her and the herd, so in a way, she initiated everyone into their lives at ECCC – she was the starting point to all of their journeys with us, touching each and easing them in.

The thing about caring for older elephants is that it is that much harder to treat them, their bodies have been ravaged by cruelty for decades, and just don’t heal as easily. And somewhere deep inside, you know you don’t have as much time to heal them completely, and need to focus on making sure the few years they have left are the most incredible, peaceful lives they could ever dream of. 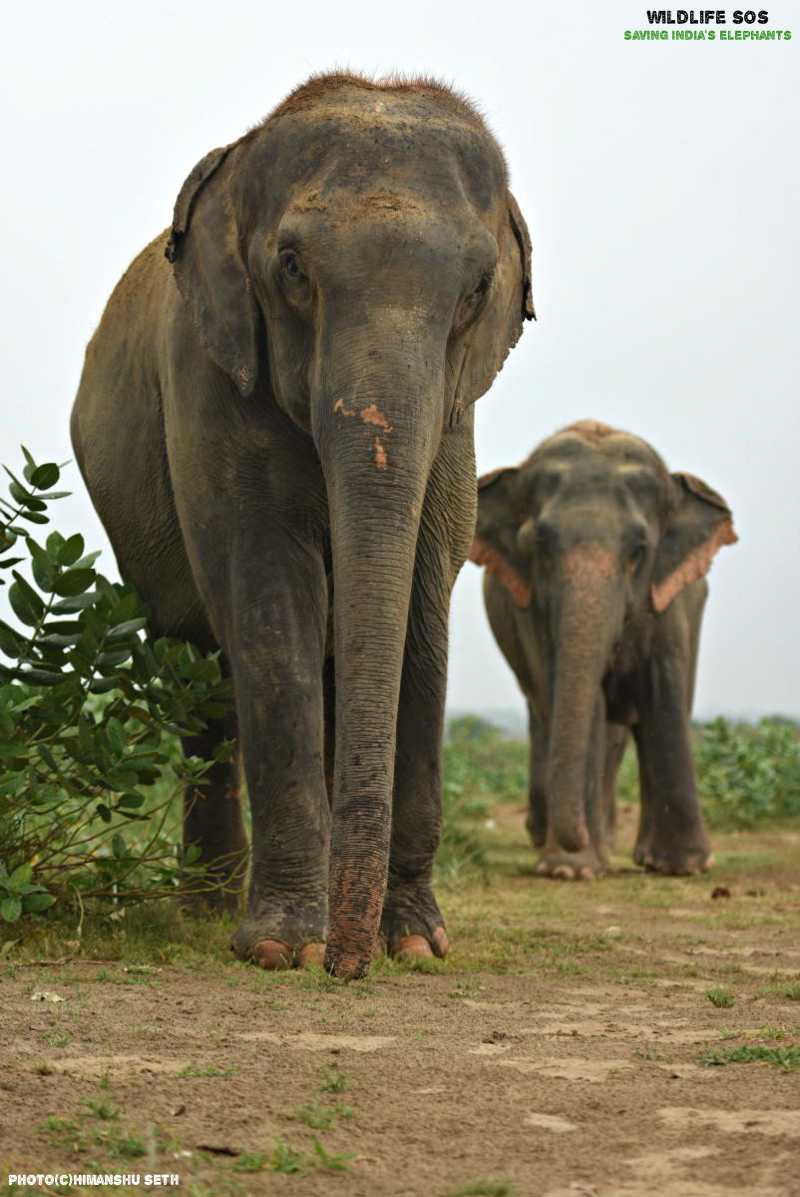 With time, Lakhi’s age caught up with her, and she showed signs of slowing down, old injuries got inflamed and she seemed to prefer resting against the mud beds in her enclosure. Late Saturday evening on the 3rd of March, she seemed more weary than usual, and even as her knees buckled under her, Asha and Coco rushed to her side to support her. Asha appeared calm and strong, as if she knew in her own way that this was it – Coco panicked initially, rushing about and running circles around her fallen friend. The team rushed in, the crane was called in to lift her back to her feet and support her – the elephants moved aside and watched, Asha touching them gently as they huddled together. They stood back as the team tried to get her back to her feet, even the younger elephants seemed uncharacteristically calm. Maybe they knew, maybe they realised it was time to let go and had their chance to say their goodbyes, and wanted to let her pass in peace. Lakhi resisted being lifted, as if she too knew her time had come. She let out her final breath and slumped down against the mud bed, eyes shut looking like she was completely at peace. As the team moved away, heartbroken, Asha rumbled loudly from where she was standing, but none of the elephants moved – Coco let out a small wail, and from every enclosure elephants responded softly with rumbles, trumpets and huffs all the way from the bulls to the closerby females like Phoolkali like an orchestra of calm, reassuring solidarity for their fallen friend.

Lakhi’s burial was simple but poignant, her keepers adorned her with flowers and lit incense and earthen lamps around her – each taking a moment to touch her one last time, pay their respects through silent prayers and whispered words. Her burial stood testament to how many lives she had touched during her three years at the rescue centre. So many journeys had started with this wonderful elephant, and now her journey had come to an end, leaving a huge gap in all of our lives.

Lakhi’s post mortem report revealed her cause of death to be organ deterioration and joint degradation due to her advanced age and her 60 years in captivity. These are things we could never have completely undone, and although her passing was sudden, it was time for her gentle soul to leave the tortured body that had housed it all those years. 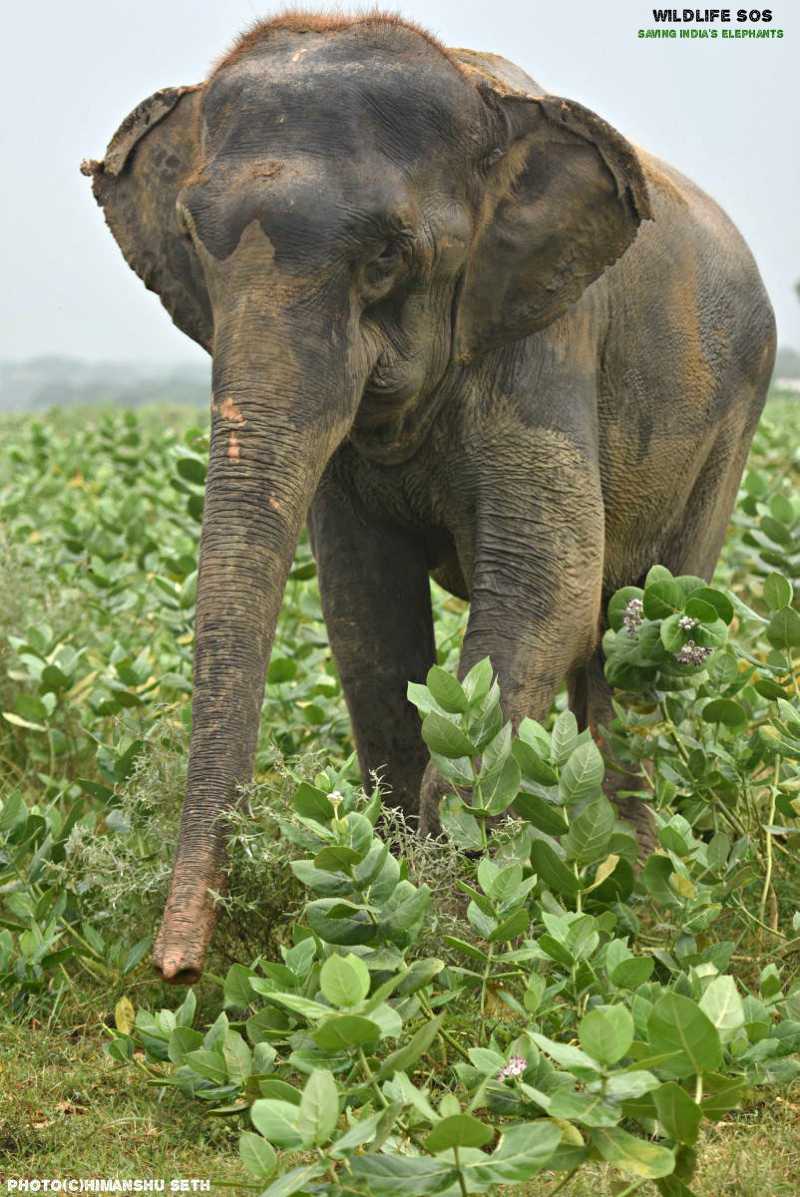 Lakhi leaves behind broken hearts around the world. Asha refused to eat the entire day, refused to budge from the spot on which she last lay. She’s been listless and mournful, albeit quiet – running her trunk through the mud and letting out the most heartbreaking guttural rumbling sounds every few minutes. Ever so often, Coco or Peanut or Suzy will respond. Once in a while another elephant will rumble back. Her keeper stands beside her, talking to her and trying in his own way to comfort her. He hand fed her a bucket of greens last night which she ate slowly and sadly. He talks to her awhile about Lakhi, how beautiful and calm she was, about how incredible their friendship was and how much he misses her too. He tried calling her into the shade, but she remained rooted to spot her friend had passed.

In the evening an incredible storm hit the centre, strong gusts of wind, and pouring rain – completely uncharacteristic of this time of the year. Lakhi sent us and the elephants rain, somebody said, a little respite from the incoming summer, to settle the dust and clean the air. The weather is cooler today, and Asha and the other elephants seem calmer, though Asha still lets out the intermittent sigh or rumble.

It will take a while for the sadness to lift, and for any semblance of normalcy to return to our lives here. We mourn her, the kind soul that defined so many of our lives. Coco mourns the mother she was to her. The other elephants mourn their fellow elephant. And Asha, mourns everything that made her life at ECCC complete – her touch, her smell, her joy and sadness and fear, her very presence and her unwavering calm friendship, that so defined Asha’s life here.

We know you are all mourning her too, and we ask that you keep her in your thoughts always, but remember her free and happy, and surrounded by elephants that were her family.

Here is a short video commemorating her time with us.