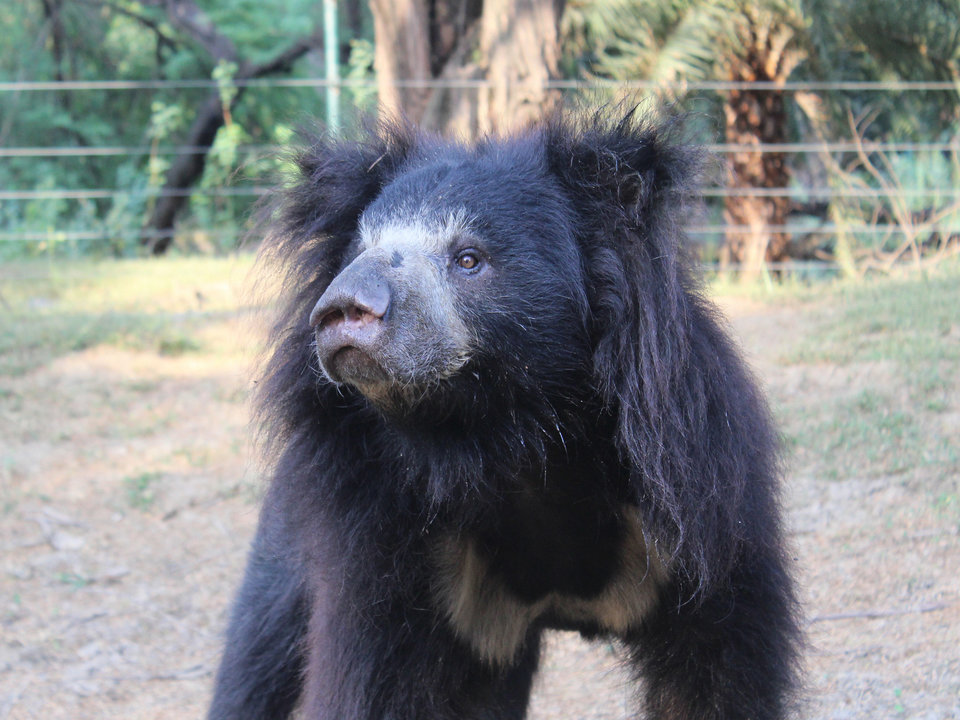 Lush trees within the premises of Agra Bear Rescue Facility sway to the tune of the wind forming a flowering canopy overhead, and serenity prevails. Under the green carpet, Bean enjoys frolicking around his enclosure playing with sister Bintha and friends Rose and Elvis, thoroughly investigating new enrichments to find out what surprises they contain and devouring honey laced porridge at the speed of inhalation. His keeper continuously finds ways to keep him occupied, so there is never a dearth of excitement, and most importantly, as much honey as he could want!

While Bean’s story has a reasonably happy result, its beginning was marred with loss, separation and unimaginable trauma. Bean and his sister Bintha were rescued from poachers in Jharkhand. They were fated to be sold into a life of misery as dancing bears across the Indo-Nepal border, where this cruel practice still persists. At first, the siblings were aggressive and frightened but their trust was soon won over by their patient care givers. Bean went on to find himself a best friend—Elvis and this dashing duo tends to liven up the atmosphere with their antics and friendly bouts of wrestling.

As the group grew up, Bean’s playfulness subsided over time and he began reducing his participation in group activities. Elvis, Rose and Bintha have become more boisterous and ebullient, but Bean is still the soft, gentle soul that he has always been. Sometimes this leads to unruly interactions and we noticed that Bean prefers to stay away from the fracas. These days, he prefers spending time by himself on top of the double level structural platforms, where he often carries honey logs to indulge in peace.

Recently, Bean developed a slight infection between the digits of his paw, which was exacerbated by the harsh winter chill. To ensure that playtime between the four does not hurt Bean, he was shifted to a solitary enclosure. There’s a strict medical routine that has been mapped out for him including ingestible antibiotics and soothing creams. Apart from that, he has also undergone regular checkups, a bout of deworming and his annual vaccinations. Of course, the treatment has done nothing to lessen his excitement for enrichments and food! In fact, his daily treatment is conducted on top of the double log platform – his favourite enrichment! He consumes up to 1.2 kilograms of fruit in a day and there’s plenty to choose from – watermelon, papaya, chickoo and apples, to name a few.

When not basking in the sun atop his platform, Bean spends a lot of time digging small pits in the soft mud of his enclosure. When he rests, these pits are filled with fresh hay by his keeper and transformed into comfy cubby holes, a personal delight for the young bear. He just takes a small break while eating and then ambles on to tumble right back into the hay beds.

A gentle bear with a sweet disposition, Bean has called ABRF home for seven long years now, filled with companionship, finger-licking food and plenty of stimulation, both mental and physical. Over this period, the young cub that arrived at the centre in 2013, weak and frightened, has grown into a wonderfully smart and well-adjusted bear. His stocky body and powerful legs enable him to scale trees with prowess and his mass of black fur is sleek and shiny, both signs of a healthy, fit bear. His story is a testament to the enormous strength of his will.