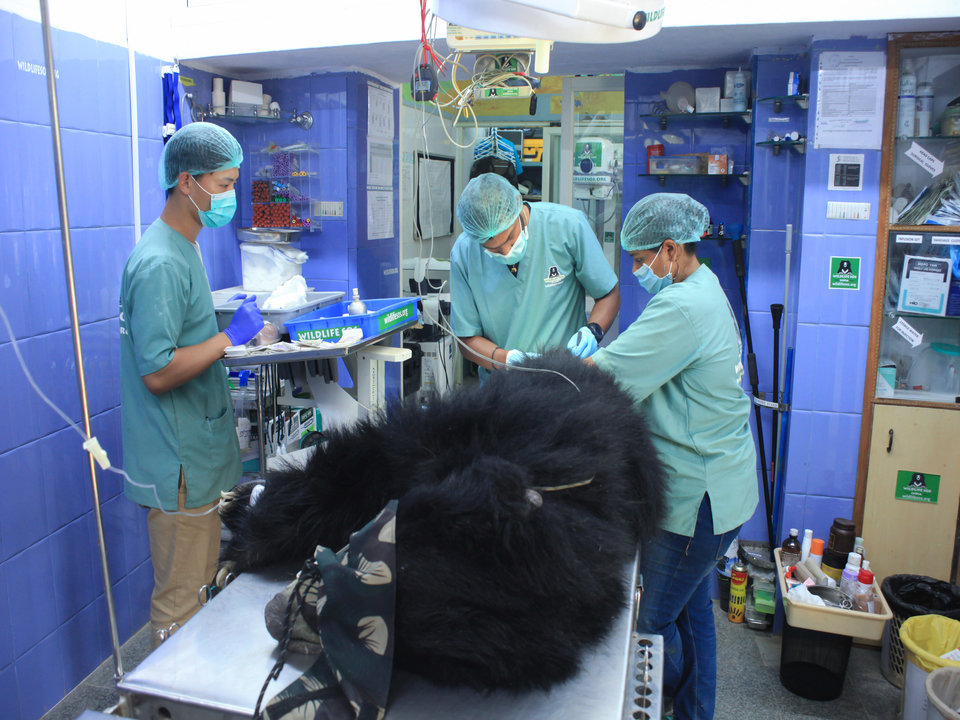 Wildlife SOS team operating out of the Bannerghatta Bear Rescue Centre (BBRC) in Karnataka received a call out of the blue – the voice on the other end of the phone was strangely muted with a clipped undertone of urgency. It informed the team that local forest department officials found a wild sloth bear outside a small village a few hundred kilometers from the bear facility and that it was badly injured; so badly that officials feared it would not survive if not provided treatment as soon as possible. A 5-member team immediately departed from BBRC with the necessary equipment to make the 180 kilometer long journey to provide medical assistance to the wounded bear.

The sight waiting to greet the eyes was not pleasant. Forest officials were speaking to villagers, trying to gather information, and escorted the team to where the bear lay, exhausted and grunting in pain. The villagers said that they were just on their way to the fields when they heard a strange sound of leaves crackling and an animal keening as if in terrible pain. Then one of them saw a dark shape dragging itself across the forest floor; it was clear it couldn’t walk at all. It was at this moment that the bear, finally exhausted, collapsed, giving the villagers time to contact the authorities. As veteran veterinarian Dr Arun examined the bear he found multiple injuries on her back and severe abrasions on her hind limb knees. Further investigation revealed a deep puncture wound right above her spine, which was the probable cause of her immobility. Officials and veterinarians surmised that when she discovered the loss of movement in her legs, the bear continued to drag herself to her destination which took a toll on her strength.

The initial examination showed that the bear needed immediate and urgent medical assistance at a specialized centre capable of caring for her. The team carefully immobilized the bear and transported her back to BBRC, where she was immediately wheeled into the ICU for urgent tests. Multiple radiographic tests were conducted on the bear as the penetrative wound was quite serious. After conducting an x-ray, it was found that a pellet shot from a muzzleloader had further disintegrated into shrapnel that was lodged in sensitive parts – two fragments were found in the abdomen, another had torn through tissue to lodge itself in the left hind limb ankle and one was just outside the thoracic cavity. Due to the involvement of the spinal cord, the bear suffered from complete paralysis in the lower half of the body; luckily, the pellet in the left hind limb was successfully extracted after surgery. Throughout the night, the bear was put on a regime of antibiotics, painkillers, fluid therapy, laser therapy and other emergency medical procedures. She was provided watermelon and porridge to eat, both of which she refused, but continued to sip warm water mixed with honey.

As of now, the bear is under the watchful eyes of a team of caretakers whose job is consistent monitoring. The team’s only priority is to get her to eat and build up strength. We also hope she becomes more comfortable with her surroundings as that will be beneficial for healing.