Leopards are a highly adaptable species and for years, they have been living and breeding quietly in close proximity to villages and towns where the growing human population have taken over their natural habitat. In recent years this shy and elusive species has fallen victim to increasing incidents of man-animal conflicts across the country mainly because the population of small mammals and other such wildlife that they prey on have been decimated and they are forced to prey on domestic animals such as dogs, goats and livestock.

Last week, the Wildlife SOS team that manages the Bannerghatta Bear Rescue Center in Bangalore received a late night emergency call from the Range Officer of Ramanagara Forest Division. He had received word of a young leopard juvenile that had fallen accidentally into a deep water tank which was dry and uncovered. It was unable to climb out and escape on its own because it was still quite young, whereas an adult leopard might have managed to get out on its own. The location was in Kailancha village near Ramanagara on the outskirts of Bangalore. The deep concrete tank was located on private property bordering the forest, which is home to leopards and other wildlife. On hearing the distressed mewling of the young leopard, the local villagers rushed to investigate the situation, following which they contacted the Forest Department for assistance.

At the crack of dawn next morning, a six member team led by Wildlife SOS Veterinary Director – Dr. Arun A Sha accompanied by three forest officials made the 40 kilometre journey from the centre to the site. The team also brought tranquilizing and rescue equipment in hand. Terrified and helpless, the exhausted cub exhausted, having been trapped inside the tank for nearly twelve hours. 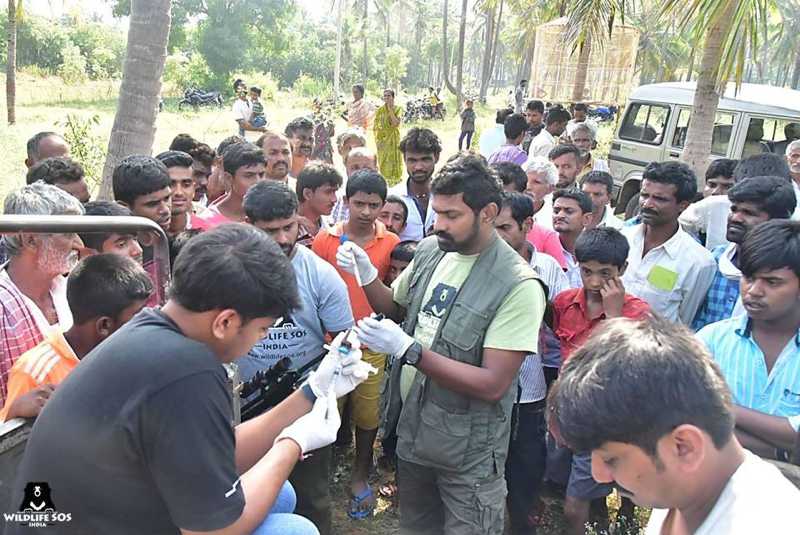 After a quick assessment of the situation, Dr. Arun carefully tranquilized the cub with a darting gun. The team waited until the animal was completely sedated, when two of our trained rescue team members climbed down into the tank to carefully extricate the sleeping leopard, by first transferring it onto a stretcher. It was then moved out of the tank and into the animal ambulance before it was shifted to Bannerghatta for observation.

Identified as a 15 month old male, the leopard’s physical examination confirmed that it was unhurt and fit for release albeit rather hungry. Later that evening, the team headed back to Ramanagara to assist the Forest Department in carrying out the safe release of the cub back into its forested home. As leopards are very territorial, their survival in the wild reduces if they are released in a different area. Therefore it is essential to release these animals in the vicinity of where they are rescued. 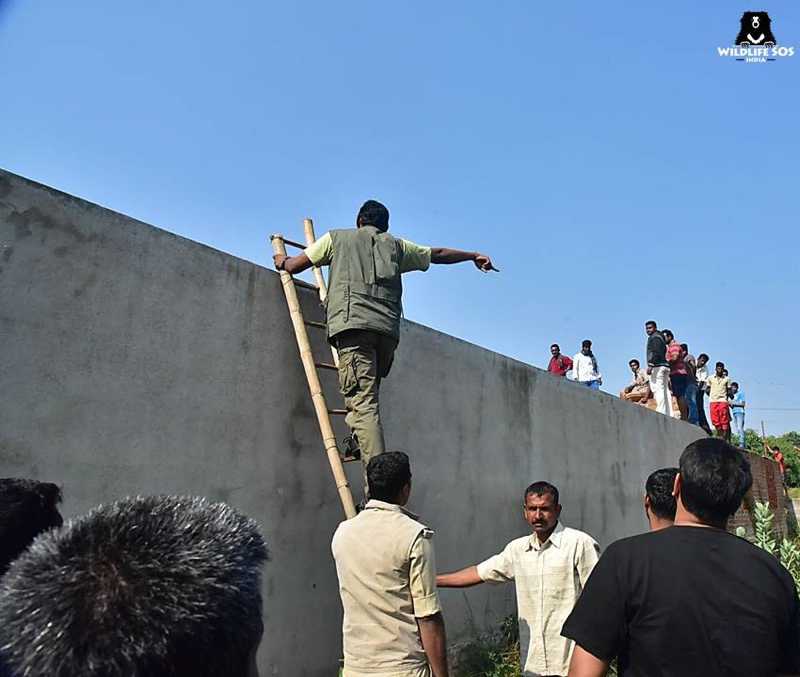 Uncovered water tanks and open wells in most villages are a death trap for many species of wildlife particularly small jungle cats, civets, leopards and other nocturnal animals. The villagers; once they no longer use a tank or well fail to place proper net covers which expose unsuspecting animals and sometimes also humans to the risk of getting trapped inside them. In the interest of public safety and the welfare of wildlife, appropriate measures must be taken to prevent such incidents from taking place in the future.