On September 27, 2011, in a dank and filthy circus camp in Aurangabad, Maharashtra, a 24 year old female elephant named Chanda gave birth to her second calf, a tiny baby girl named Suman. Suman’s father Bijli – a magnificent bull despite his missing left tusk – was also at the circus. Further off, her older sister stood restrained uncomfortably by both her feet, her head swaying monotonously.

That night signaled the beginning of Suman’s story, one that has been riddled with terror, suffering and fear – despite just being 6 years old.

In 2013, two years after she was born, Suman, Chanda and Bijli were illegally sold by the Moonlight Circus to the father of a man named Sameer ‘Ballu’ Khan, and illegally trafficked across state borders to the city of Jaipur in Rajasthan. The transfer of ownership of the elephants was done without any of the requisite paperwork, those involved being wholly aware of the illegality of what they were doing.

Today, Sameer Khan, who inherited the elephants from his father is widely regarded as the most cruel of all the elephant owners in Jaipur, a city widely regarded as the most cruel place in the country to the over 100 elephants that are held captive and exploited there. Horrifying footage and stories of him mercilessly beating his elephants with weapons including axes, burning the delicate footpads of their feet and of the number of his elephants that seem to die early, unnatural deaths emerge constantly, leaving us in no doubt of the authenticity of the claims of his evil disregard for the lives of the gentle giants he exploits for money.

A year passes, and the cruelty baby Suman experiences over these days is only an initiation into what she is going to go through in the coming years, and possibly the rest of her life. She is being indoctrinated into captivity, undergoing a brutal process aptly called ‘breaking the spirit’ of the elephant, to prepare her for a life of subservience to cruel human masters. Then, in 2014, Suman finds herself being transported to the state of Gujarat to star in a TV show. The process of training her for the show, and the conditions she is forced to live in during shooting result in animal welfare groups campaigning for the shows end and Suman being relieved from her exploitation. Abruptly, the show is taken off-air and the baby elephant is returned back to Jaipur.

Another year passes, Suman is housed near her mother, but restrained so tightly she can’t reach her. Her father Bijli is rented out to weddings and processions, much in demand being one of the only two bulls in the city. His missing tusk is camouflaged with a heavy false tusk, fixed awkwardly onto him and hidden under heavy, uncomfortable and gaudy decorations. Chanda, the mother, also spends her days garishly caparisoned at the Amer Fort, slowly and excruciatingly making her way up the arduous climb to the top of the fort with a heavy carrier pressing down on her protruding spine, filled with tourists and a handler that keeps a sharpened stick always at the ready to punish her for any steps out of place or exhausted resistance.

In 2015, the three elephants’ original home – The Moonlight Circus – is shut down on grounds of legal violations and the four elephants still in the circus, including Suman’s sister, are rescued by Wildlife SOS and taken to our rescue centre in Mathura to live out the rest of their lives surrounded by people that care for them, and other elephants, receiving medical care, and every amenity they need to thrive in their new home. The elephants are nicknamed the Nutherd, and the youngest of these four elephants, the first daughter of Bijli and Chanda, is named Peanut – the much adored baby of the Wildlife SOS Elephant Conservation and Care Centre.

Shortly after we rescued the Nutherd, and Peanut, we found out she had a sister, and that her parents were in captivity too – we investigated the claims, and followed multiple leads till dead ends, before stumbling upon the three elephants in Jaipur – exploited, tortured and denied everything, including each other’s company. It broke our hearts. Peanut’s rescue, her gradual development into the naughty, wonderful and gleeful young calf she is today gives us so much joy, but in the back of our hearts, Suman’s story – and that of her parents – casts a depressing shadow. We have to get her out. 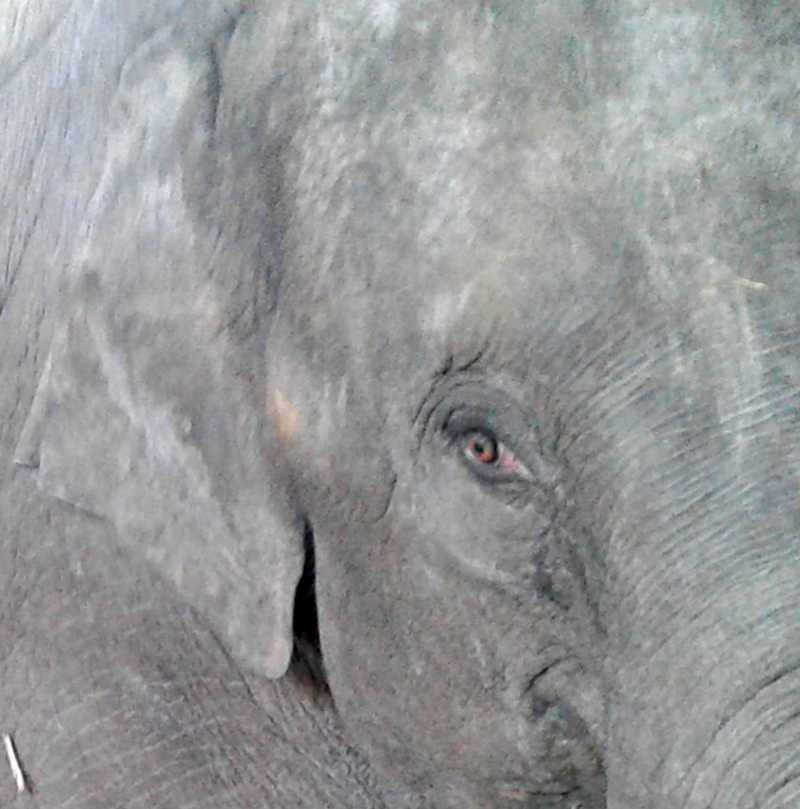 Last year, we introduced Suman tentatively to our supporters – but use the name Hazel and cropped pictures of her to avoid risking the lives of our sources and jeopardizing her rescue. All the while we struggle to gather intelligence on the elephant – she is hidden away now, chained in a basement that she is never allowed to leave. We hear heartbreaking stories of how she is no longer allowed to see her mother because they both get so overwhelmed and cry when they see each other. We hear she ran amuck when she was taken out last, she’s a baby elephant so it isn’t at all surprising that she still has a little spirit left in her – but that ever since then, she isn’t even taken out anymore, just tightly restrained by two feet in the dungeon that is her home now.

She sways her head miserably, monotonously. She’s stressed, bored and scared – worst of all she is alone, except for humans that hurt her. At the fort, and at tourist spots across the city, Chanda lugs tourists around on her back in the blistering heat, her footpads searing on the hot tarred roads and rocky streets. She must be in unimaginable anguish, but the pain of losing her babies – twice – must be infinitely worse. As a bull, Bijli is hidden away, likely being beaten regularly to keep him submissive, despite all the anguish humans have imparted him.

Their status in Jaipur is never legalized, since their sale and transport was illegal, but the government, the Forest Department, everyone entrusted with ensuring their welfare, seems oblivious to their existence. Attempts are made to sell them which we manage to put a hold on, even as attempts are made to obtain false documents for the three.

Just as the authorities turn a blind eye to the plight of these three elephants, they turn a deaf ear to our repeated attempts to reach out to them for help. Tourism drives the city of Jaipur, and the elephants drive tourism – a government that takes a stand to actually enforce the law for the welfare of these animals also stands to lose favor amongst the locals, and a lot of tourism money.

We feel helpless, but we cannot give up on Suman and her family. As a baby, she is faced with an uncertain future – either 50 years of abuse, beatings, neglect and fear or 50 years of safety, kindness, veterinary care and love from people and other elephants at our rescue centre. Five decades of cruelty, or five decades of care. We are reaching out to our supporters, and elephant lovers across the world to stand strong for Suman and ensure her future is safe with us – please join us in imploring the authorities in Jaipur to save Suman and her family and reunite her with her sister in ECCC.

The ways you can take action are to:

Speak up, push hard, and raise your voices against this injustice – bring Suman and her family, a family that has already suffered so much pain and loss, out of the darkness and towards a better, kinder future!