Maharashtra, the fourth-largest state to harbor Indian leopards, has in the recent years faced the threat of a shrinking habitat, resulting in a surging number of man-animal conflicts. Owing to urbanization and increasing attempts to meet the ever-growing needs, humans have exposed wildlife and their natural habitat to a great degree of exploitation and degradation, respectively.

The expansion of human settlements to the forest areas, have forced wildlife to the brinks of the same human habitations and further placed the lives of both man and animal at risk. Additionally, the lack of prey base has also forced the wild animals out of their natural habitats and into the humanly populous regions. Often in search of easy prey like the cattle and other domestic animals, the leopards stray into the villages and find themselves in conflict situations.

Wildlife SOS, on a daily basis deals with wild animals in distress and sensitizes the masses on the prevalence of urban wildlife. Awareness and compassion, hence forms two crucial very pillars of saving India’s wildlife in distress. The idea of mutual cohesion plays a major role in advancing a peaceful natural habitat for the sustenance of the wild animals. In the backdrop of which, the organization is committed to working with both rural and urban communities in India, in order to apprise them about the conditions and display to them the possibility of mutual co-existence. 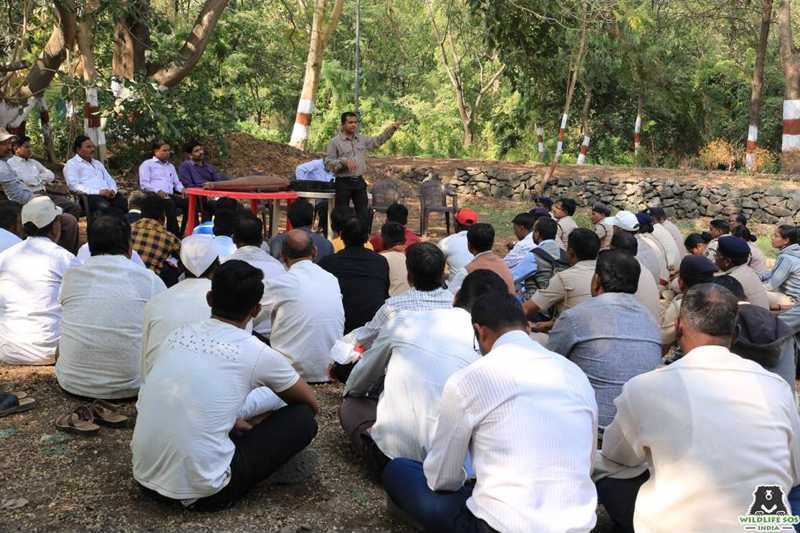 Along these lines, Wildlife SOS’ team at the Manikdoh Leopard Rescue Centre organized an interactive leopard awareness program with the locals of Udaipur village near Junnar, Maharashtra. The engagement with the community was centered around the increasing confrontation with big cats in the area. The agricultural fields being in close proximity to the forest areas, results in the repetitive occurrence of such incidents. Hence, the team sought to approach such problems and laid out the necessary precautions that should be ensured to contain such events.

The community representatives, on behalf of the 5,000 families in the village positively participated in the talk and were seen keen in learning the facts and possibilities of mutual cohesion. Interchanging conversations, they voiced their opinion and also brought forth the evolving attitude of the locals towards the leopards. It is positively motivating to witness the community, which has come a long way from killing leopard cubs out of fright to aiding our team in reuniting cubs and leopard mothers, found in the vicinity.

In the last decade, the villages in Maharashtra have also witnessed a surge in the sightings of leopards in the sugarcane fields. Habitat modification has led to the female leopards seeking refuge in the tall, dense plantations of the sugarcane. This makes them vulnerable to human intervention and conflict building situations. Dr. Ajay, Senior Veterinarian and the team , at the Manikdoh Leopard Rescue Centre have in the past carried out successful reunions of leopards mother-cub, and have achieved a remarkable positive change in the attitude of people towards the big cats.

It is important to understand that tolerance towards these majestic felines and co-existence is the key to reducing such growing conflict issues. There is a need to adopt long term solutions such as building adequate toilet blocks, covering up open wells and water tanks to prevent such conflicts and leopards falling victims to open wells, coming up with alternative methods to prevent loss of livestock and avoiding venturing out at dawn or late at night without adult supervision or being part of a large group.