The scrub forests of Maharashtra have always been home to a rich population of leopards that for years have been living and breeding quietly in their natural habitat. However, over time due to the constant encroachment of forest lands, these elusive cats have been forced to share their territory with the ever growing human population residing in close proximity to their natural habitat and encroaching on their territory. As their prey base and territory continue to deplete with alarming rapidity, incidents of these animals venturing into human settlements and sugarcane fields in search of shelter and food are on the rise. They mainly prey on domestic animals and livestock, causing financial loss and leading to human-leopard conflict in regions where they are found.

On the morning of 13th June 2016, on the outskirts of a village called Parner, a female leopard ventured into the neighbouring forest in search of food and water, leaving her young offspring behind.

Giving into their curiosity, the two mischievous cubs decided to do some exploring on their own, only to face the misfortune of slipping and falling into a 40 foot deep dry well, outside a village.

The helpless yelps of the terrified cubs caught the attention of the residents of the Parner village and they rushed to investigate the situation. Being accustomed to the occasional glimpses of leopards around the area, the villagers immediately reported the incident to the forest department officials, who in turn contacted the Wildlife SOS team at the Manikdoh Leopard Rescue Centre, Junnar. A four member team led by senior veterinarian Dr. Ajay Deshmukh, drove almost 90 kms from their facility to the site, to find the terrified pair curled up at the bottom of the well.

Initial attempts to coax the animals into a trap cage that was lowered into the well had been unsuccessful, as the terrified animals were too scared to move, choosing to stay huddled close to each other for comfort. Rescue operations that involve cubs are always easier to handle as they do not require tranquilisation but there was also the growing concern that the mother would return to find her cubs, which would then pose a threat to the crowd gathering at the scene. 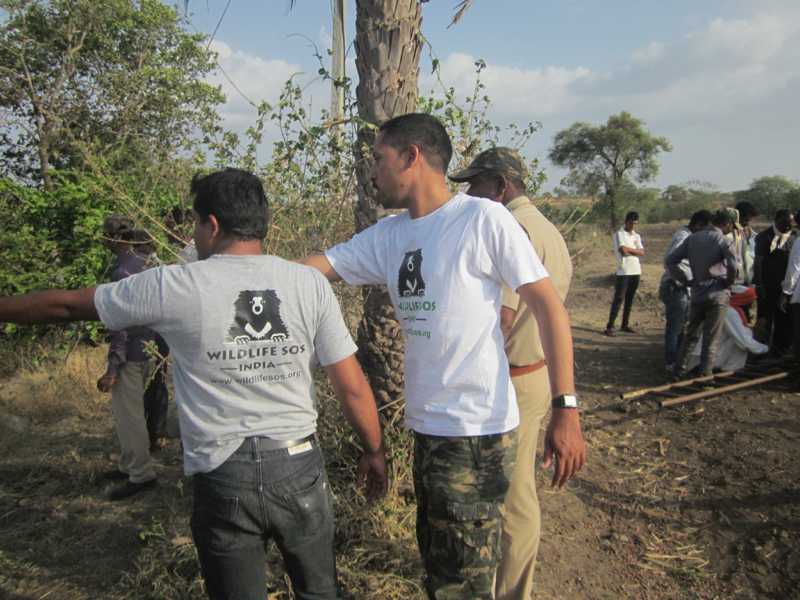 They finally devised an ingenious plan of creating a nearly forty foot long ladder by sourcing several ladders from the village and then fixing them together.  On seeing Dr. Ajay and Forester S.G. Madake entering the well, the scared cubs began running about frantically, before the two were caught and carried out of the well. A thorough examination was then carried out for injuries that could have been sustained when the cubs fell into the well or during desperate attempts to escape, as well as to ensure that the cubs were healthy and fit for release.

In the meantime, information was received by way of a villager nearby that the mother had been spotted in the vicinity and so we arranged for the cubs to be released in that location in hopes of a reunion. On being set free, the cubs took off immediately and headed in the direction of their mother, who was relieved to find that her babies were safe and unhurt. It is always rewarding for us to see rescued cubs being successfully reunited with their mothers, as this way they can have a good chance at a free life in the wild.

Rising Temperatures Taking a Toll on Birds in New Delhi