When Wildlife SOS’ Co-founders Kartick and Geeta first decided to start rescuing India’s dancing bears, they weren’t sure where to begin. The practice had been carried out for over 400 years, and the nomadic community that practiced it was dispersed across the country, forcing bears to perform in rural backwaters and streets all over India.
So Wildlife SOS decided to tackle the problem right from the root. They lived with the Kalandars, travelled with them and talked to them- and found a simple but ingenious solution.
Wildlife SOS offered the Kalandars a three-pronged way out of the poverty that tied them to the atrocious practice of dancing bears. If they gave up their bears, the men were granted seed funds and assistance to start alternative livelihoods. The traditionally subjugated women of the community were provided skill training to create products that the organization would sell, for money that would go straight back to the Kalandar women, to make them secondary breadwinners in their households; thus offering them some form of independence in the community. To end, once and for all, the deprivation that forced the Kalandars into the trade of animal performances, Wildlife SOS began supporting the education of Kalandar children, sending them to school, paying their fees and buying their uniforms and school supplies. Those that were eager to study ahead were even offered financial assistance through college.
The program was an unprecedented success, and since the start of  Dancing Bear Project, we have been working with the Kalandar community in four states- Madhya Pradesh, Rajasthan, Karnataka, Haryana and Uttar Pradesh.

Within the state of Uttar Pradesh, the Kalandar community is concentrated in the districts of Chhata, Kosi-kalan, Deoria, Tedibagiya, Jalesar, Talsemri and Rampur. Our Kalandar program reaches out to erstwhile bear dancing families in each of these localities to help provide them a better life by assisting them in developing sustainable alternative livelihoods.

One of the most heartbreaking stories we’ve come across while working with the Kalandar community is that of Sabroon. Suffering from a mental disorder and prone to fits, Sabroon became the sole breadwinner for herself and her child after her husband passed away. Our initial attempts at providing her an alternative source of livelihood were unsuccessful as she was unable to manage a store due to her poor condition. The community approached Wildlife SOS for help as they were extremely concerned about Sabroon who lived in a mud hut with no roof and would often wander out of the house during the rains, to search for shelter. Wandering the streets alone in awful weather, Sabroon was an easy target and unable to defend herself.
Sabroon became one of the first of our Roofing Support initiatives in Deoria, and Wildlife SOS sponsored the purchase and construction of a roof over Sabroon’s home, alleviating her of her need to leave her house during the rain and risk harm.

Another particularly moving case that we came across was that of Maidunbee who was married to a Kalandar who practiced bear dancing. Maidun’s husband is aged and sickly and her children have deserted her in her old age. Enterprising and hardworking, Maidun worked odd jobs as a domestic help to earn petty wages for herself and her husband, but found it impossible to keep working once her knees began giving her trouble. Maidun was provided with an egg shop by Wildlife SOS, from which she can earn a decent living without exerting herself.

Hajju Kalandar lives in the village of Jalesar, along with forty other Kalandar families, which, like him, work as labour for a wealthy landowner in the area. They barely earn enough to keep their families alive. For a little extra, they resort to their old traditions of street performing, but without any animals.
The team from Wildlife SOS’ Kalandar Rehabilitation program visits the area regularly to counsel the families about better opportunities, encouraging them to send their children to school. Wary of change, and hesitant to educate the children, it was nearly six months before any signs of positive change came to the tiny Kalandar settlement. Hajju Kalandar paved the way for a new way of life for the Kalandars of Jalesar, by accepting Wildlife SOS’ help and allowing us to develop a grocery shop for him. We taught him to run the shop, manage stocks and conduct sales, and he’s been happier since. He’s putting his children through school much more willingly and is now inspiring more people in the village to follow suit.

Wildlife SOS remains dedicated to helping not just wildlife, but communities that were earlier dependent on animals and are trying to make a better life for themselves. If you would like to help make a difference to the lives of the Kalandar people, consider donating to our efforts HERE. You can even sponsor a sewing machine for a Kalandar woman to help her become an earning, contributing member of her family, by following this LINK. 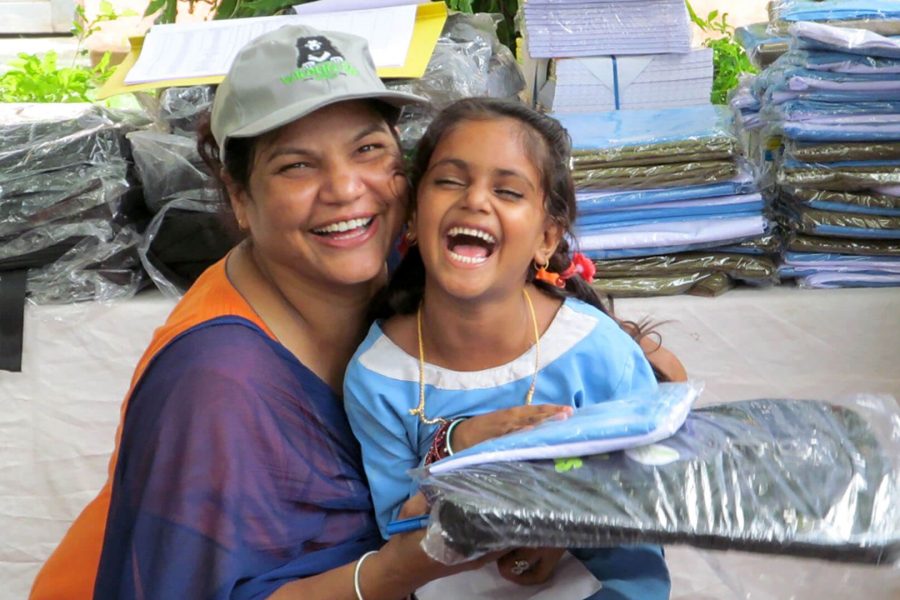