For the sugarcane farmers of Maharashtra, January brings with it the harvest season – and mornings bring hours of manual labor cutting down the crop and tossing the bales into the waiting tractors. It’s a season of plenty, not just for the farmers, but for another visitor to the fields, that wanders stealthily through the tall stalks, content with the easy access to water and shelter provided by the fields. It’s cub season for the leopards of Nashik, and the security the tall grass accords them lulls mother leopards into a false sense of security.

Leopard cub. The thought is enough to send the farmers into a state of panic. For where there are cubs, there are generally fiercely protective mothers. But this cub is alone, scared and abandoned, with no mother in sight. Hours pass, and the perplexed and concerned farmers eventually call the Forest Department. The Department confirms that the cub has been abandoned, and makes a few desperate attempts at locating the mother and reuniting the cub with its family.

Although not reliant on their mothers for daily nursing after two months, leopard cubs remain dependent on their mothers for another two years of their lives, relying on her to not just feed and protect them but to teach them the skills they require to survive in the hostile jungles they call home. Without her mother, this four-month-old female didn’t stand a chance at survival in the wild.

Realizing this, the cub was handed over to the Manikdoh Leopard Rescue Centre in neighboring Junnar, where the Wildlife SOS team would now act as her foster family. Hand rearing a wild cub is no mean task but the team at Junnar have had plenty of experience in the field, and an amazing track record to boot – the cub was in the safest hands possible. 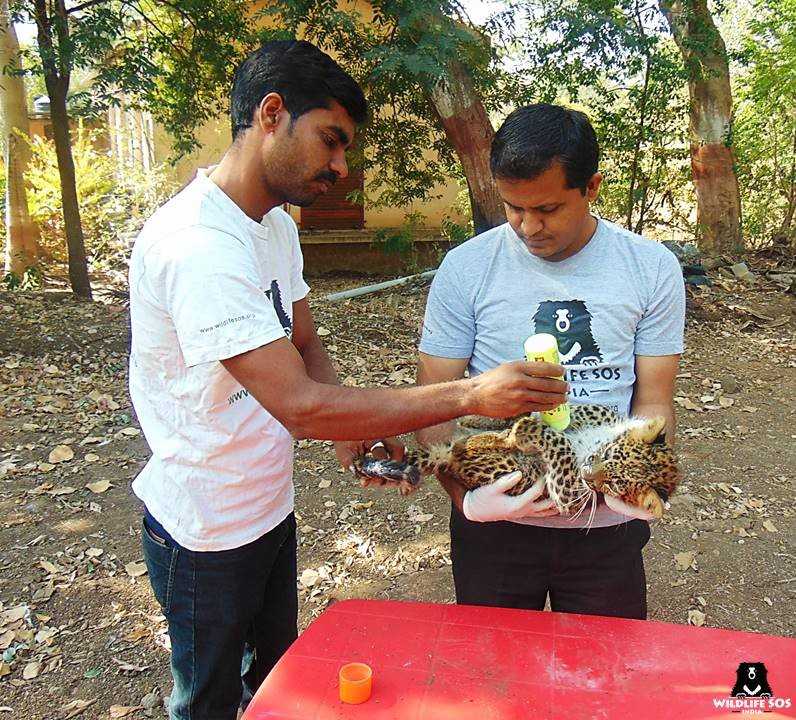 Her arrival at the centre began with a preliminary but thorough checkup by the senior veterinarian at the centre, Dr. Ajay Deshmukh. He was all smiles as the frisky cub fought him every second of the examination, twitching her nose indignantly as he tried to check her for ticks and fleas. She certainly had spirit, swatting her tiny paws playfully at the staff while they administered her first vaccinations and got her all ready for her new life at the centre.

It is heartbreaking that she won’t be able to return to the wild, but we’re happy to find that she seems to be healthy, with no traces of infestations or injuries. With her natural habitat shrinking rapidly, and her species under violent threat of escalating man-animal conflict, this little cub has found herself in a safe haven – with a whole family of experienced and dedicated staff that will do everything they can to ensure she grows up healthy and happy.

We have named the leopard. Her name is now Sundari, which means “beautiful.” Very appropriate!