It has been many years since we welcomed Goldie into the Agra Bear Rescue Centre. He was rescued from a Kalandar community settled in Sahibganj, Jharkhand. Starved, abused and forced to live the agonizing life of a dancing bear, Goldie was affected deeply, both physically and emotionally.  He was highly emaciated, had an unkempt and matted coat, and also displayed signs of aggression and stereotypical behavior. This is commonly exhibited by animals that have been snatched at a young age from their mothers and forced to live in captivity under harsh conditions. Lack of proper care and nourishment had also taken a drastic toll on his eyesight, leaving him blind at a very early age.

Goldie has come a long way since his arrival at the centre and is now a healthy nine year old sloth bear weighing approx. 95 kilograms. Under the care and treatment of our veterinarians and his keeper Dheeraj, Goldie has been able to emerge from the shadows of his abusive past.

He remains wary of human interaction but has formed a bond of trust with his keeper.  We hope to one day see him become more trusting of our staff, who want nothing more than to help Goldie live a happy and healthy life under their dedicated care. Though he can be seen interacting with the other bears in his enclosure, Goldie can be quite temperamental and prefers being on his own most of the time. 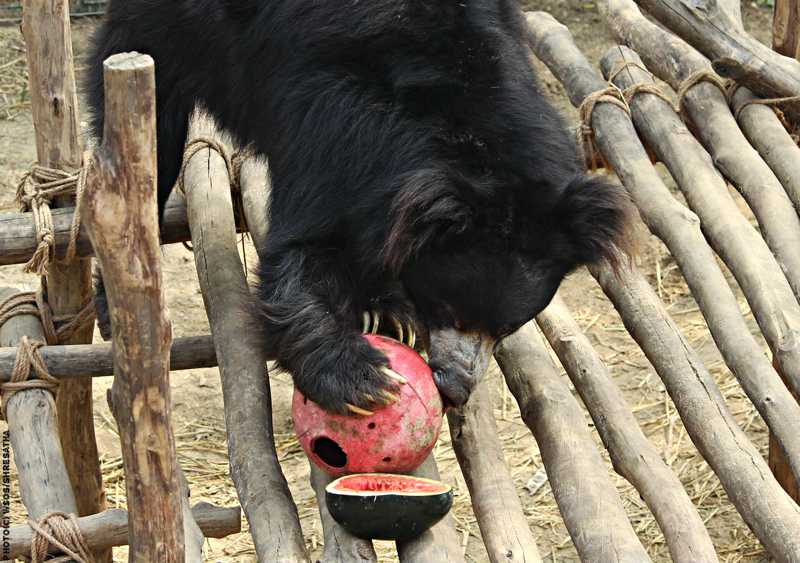 Though not much of a foodie, Goldie enjoys eating honey laced porridge mixed with seasonal fruits and boiled egg during feeding time. Munching on treats such as chunks of coconuts and dates is his guilty pleasure. He spends his day wandering about in his large free range enclosure, digging up insect and termite mounds and climbing on the structural enrichments. While quite energetic through most of the year, Goldie tends to slow down on his activity during winters and prefers spending his days relaxing on his hammock while soaking up the warm winter sun. He is quite possessive of his hammock and often gets into tussles with Rocky bear who loves troubling him by trying to take over his hammock.

Watch Goldie bear lazying around in his hammock at the Agra Bear Rescue Facility here;