Humans often fear what they do not understand and to most, snakes are a mystery. Because people do not know much about them, snakes are often misunderstood and feared. Since the beginning of time, snakes have had a bad reputation being deemed evil, sly and deadly. They have played a major role in religion and mythology, from the Bible to the Mahabharata to the ancient Egyptian texts. The media too portrays snakes as cold-blooded killers and only focus on how deadly and dangerous they are. Therefore it is no surprise that the mere sight of these slithery creatures provoke terror in many people. Although threatened by many of the same issues that affect other wildlife, including habitat loss, climate change, and disease, negative attitudes may be the biggest barrier to snake conservation because it often impedes efforts to address other threats.

According to National Geographic there are over 3000 species of snakes worldwide. Out of which around 600 species are venomous and over 200 are considered to be medically important. In Antarctica and countries like Iceland, Ireland, Greenland and New Zealand snakes have not been found yet.

In India there are four snake species that are referred to as the ‘Big Four’, namely, the spectacled cobra, common krait, saw scaled viper and the Russell’s viper. There are more than 270 species of snakes found in India, out of which over 35 species have been sighted in Delhi and the National Capital Territory.

Across the globe each year, wildlife enthusiasts celebrate the World Snake Day on July 16. It is an opportune time to educate people and create awareness about the extraordinary but largely misinterpreted reptile. Simultaneously, monsoons arrive in North India, increasing the chances to come across snakes in urban landscapes. The monsoon is a distressing period for burrowing animals like snakes and other reptiles, whose homes get flooded and they have to scout elsewhere for shelter and food. They often enter human habitations in their quest for protection from the downpour making them uninvited visitors in the homes of city dwellers; vulnerable to instances of human-urban wildlife conflicts. This vulnerability makes them self-defensive, and they strike at the hint of any danger. 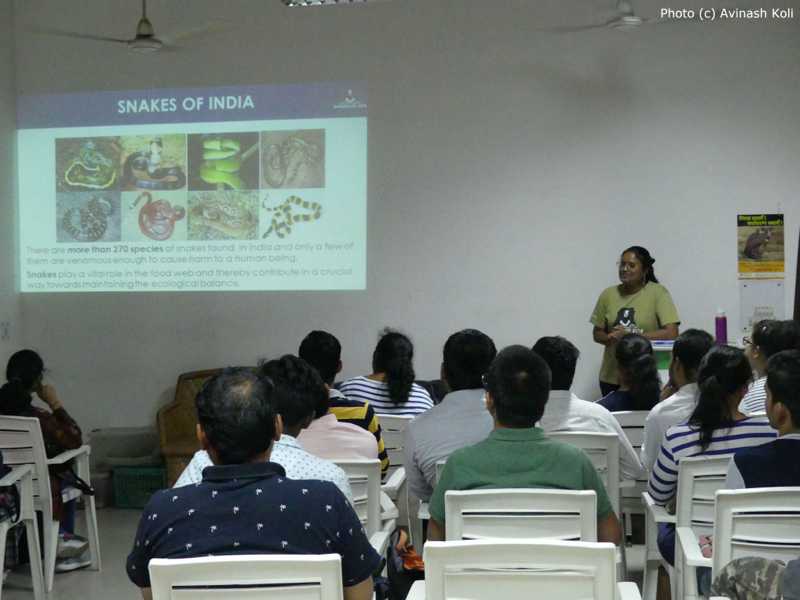 Last month, Wildlife SOS in collaboration with the Bombay Natural History Society (BNHS) – Conservation Education Centre organised two snake awareness talks to appreciate these fascinating animals in Asola Bhatti Wildlife Sanctuary. Our team was thrilled to engage with people of all age groups, who were interested in learning more about the snakes that live in their own city and why they are important. The characteristics of common snake species found in Delhi-NCR were mentioned one by one, including the Big Four and the non-venomous snakes such as the wolf snake, rat snake, common sand boa, red sand boa, royal snake, checkered keelback and the Indian rock python. Different species can often be visually distinguished by their characteristic color patterns. Some are single uniform colors, others have dark or light markings organized into stripes, spots, blotches, diamonds or some other pattern.

Reptiles have for a long time have been associated with numerous myths that have portrayed them negatively. To prove them wrong our team tried to bust local myths with scientific facts. Take for example a popular myth – snakes dance to the tune of the flute. In reality snakes do not have ears nor can they hear. They focus on the movement of the flute as they feel threatened by it. And give the flute a warning to not get too close. There are many such myths that need to be corrected, and the only way to do so is through awareness building. (Please follow the link to know more snake myths and facts: https://wildlifesos.org/snake-facts-and-myths/)

Emphasis on proper first aid was enumerated to all present, providing the do’s and don’ts of safe first-aid prior to the visit to the hospital. Life saving tips were also enacted like keeping calm, restricting movement, removing all constricting materials, not eating or drinking water to keep the metabolism at low rate. The eager gathering also learnt ways to deal with instances when one comes across snakes. If you accidentally surprise a snake or get too close, keep still, and move away slowly. Don’t panic. They are more scared of us than we are of them. At the end of the day, the world’s most dangerous animal is the human being! 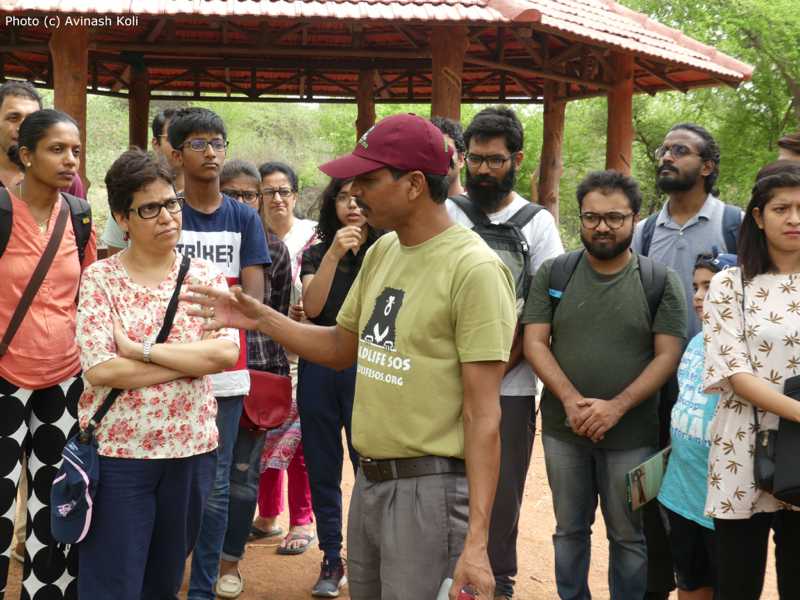 During the session, a live demonstration was also conducted with some rescued nonvenomous snakes, including common sand boas, a rat snake, a wolf snake and a royal snake. Although, the crowd was initially apprehensive, they were awestruck once they saw how confidently our staff handled the animals and realized that snakes are not dangerous if they feel safe. These rescued snakes were later released into the sanctuary.

A week later, our team was called to the Central Park Residential Society in Gurugram for a reptile talk to sensitize the residents and the maintenance staff about snakes. Such interactions help people to get rid of unfounded fear. The audience developed a better appreciation and understanding of these much maligned reptiles and expressed a willingness to coexist with them.

On the whole, snakes play a vital role in maintaining the well being, sustainability and biodiversity of various ecosystems. Not only are snakes beneficial for the environment but, humans without even realizing it, benefit a substantial amount from these scaly creatures too. Everything in nature is interdependent, a flourishing ecosystem depends on balance. Snakes being middle-order predators are essential for maintaining that balance and an interconnected food web.

Should you come across a snake, please do not try and catch it yourself, call the experts, watch it from a safe distance till the rescue team arrives and direct them to the site. Wildlife SOS runs the only 24 x 7 Rapid Response Unit in Delhi and National Capital Territory (+91-9871963535). The rescue team works tirelessly day and night to save urban wildlife in need and also educates people about human-wildlife conflicts.