Wildlife SOS continuously makes efforts to reach out to rural and urban communities, especially those living near wildlife habitats to raise awareness about using techniques for avoiding and resolving man-animal conflicts in a more sensitized manner. In recent years, problems related to human wildlife conflict has escalated in the state of Jammu and Kashmir, with the most recent incident being a bear attack on livestock in a town in the Central division.

Over the years, our Manager & Education Officer Aaliya Mir and the Wildlife SOS team have worked hard to build a strong relationship with different governmental and non-governmental agencies as well as with the local community. Working towards changing the attitude of the public is not easy, especially when the goal is to get people interested in saving wild animals that have historically been damaging their property or threatening their well-being. We conduct awareness drives for affected communities, taking out the time and patience to listen to their grievances and address queries wherever possible, offering solutions for the people and wildlife to co-exist peacefully. Due to such efforts by Wildlife SOS and the Wildlife Department there has been a visibly decline in the number of conflict related incidents however, we still have a long way to go.

A few weeks ago, the Jammu & Kashmir Wildlife Protection Department in collaboration with Wildlife SOS organised a community interaction program for residents of Krew, Khonmov and Dhara along with the field staff deployed in those areas in an attempt to address this growing issue, particularly pertaining to wild Asiatic Black Bears. The residents shared their grievances and problems which they wanted to bring to the notice of the concerned Wildlife officials. The main issues discussed were compensation for loss of livestock or crops, insurance for crops and livestock, disability fund for the conflict victim, reimbursement of the medical bills incurred on the treatment of victim as well as speedy disposal of the compensation cases in case of death due to man-animal conflict. Another important objective of the meeting was to bridge the gap between the residents of the area and the Wildlife Department in order to have a better coordination in dealing with such issues. 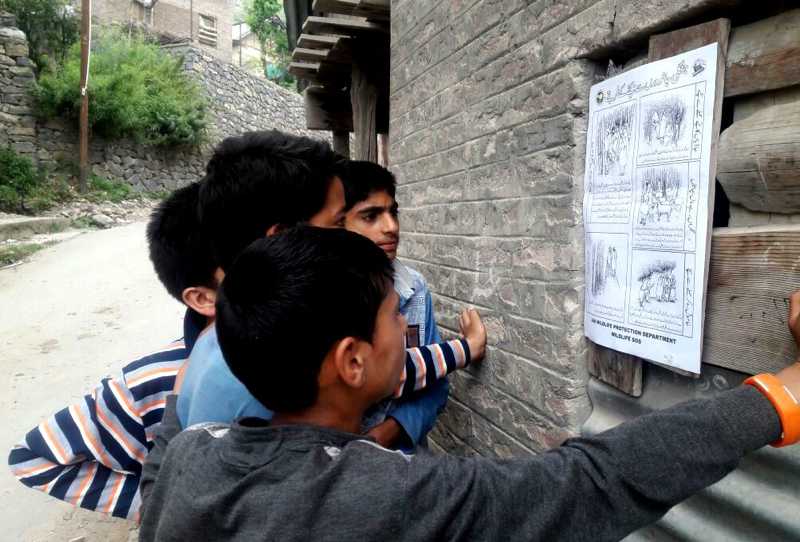 Our team went on to explain some simple forms of avoidance behavior which would prevent the residents from becoming vulnerable to a possible encounter with bears. They were advised to always carry torches, refraining from going out during dawn and twilight hours without being part of a large group of adults or to wander out into the forest and crop fields alone at night. Wild animals can also be distracted and scared off by playing loud music or make rattling noises with a stick. Leaflets were also distributed regarding conflict mitigation across town. The Wildlife Department officials also assured them of bringing these problems to the notice of the policy makers for implementation.