This year, on World Snake Day, Wildlife SOS joined hands with the Bombay Natural History Society (BNHS) to carry out a reptile awareness program. Our team headed out to the Asola Bhatti Wildlife Sanctuary on the outskirts of Delhi, where we release a majority of the snakes rescued by our rapid response unit. Team members Kadambari Atri & Wasim Akram talked to a group of snake-lovers and wildlife enthusiasts about snakes in their city, and why they’re important.

Since snakes are generally misunderstood reptiles, associated with fear and danger, Wildlife SOS works to alleviate these misconceptions and sensitize people towards our serpentine neighbors. Delhi is home to nearly 36 different species of snakes out of which only four are venomous- the spectacled cobra, common krait, saw scaled viper & the Russell’s viper. Our team taught the audience how to identify the various snakes found in their city with the help of some of our rescued reptiles including a red sand boa, common sand boa, a black headed royal snake, a rat snake and even a monitor lizard! Though they were initially slightly apprehensive, the audience was awestruck once they saw how confidently our staff handled the animals and realized that snakes are not dangerous if they feel safe and unthreatened. 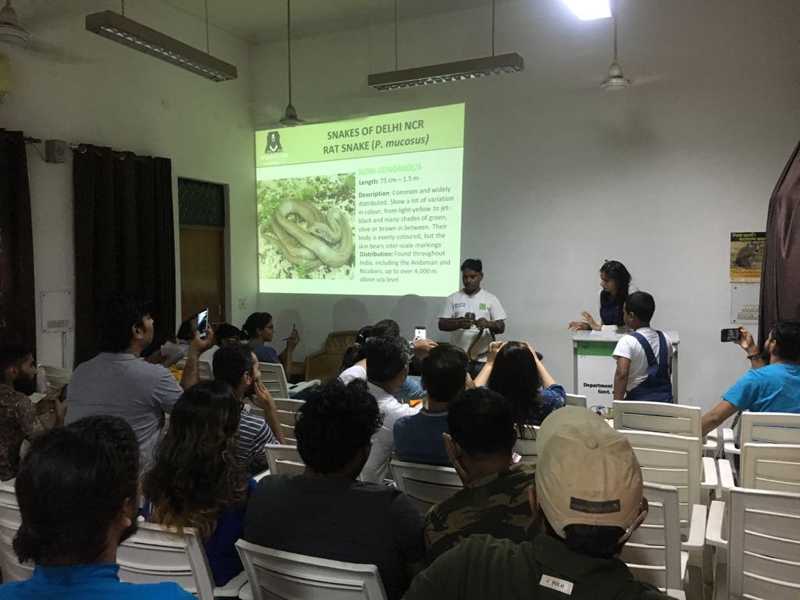 The team also took the opportunity to talk about the numerous reptiles rescues our 24 hour Rapid Response Unit has been carrying out across the city due to the rains. We find a large number of reptiles struggling to find shelter in the urban jungle, during this season as their burrowing homes get flooded and destroyed.

Information was shared on first aid measures that should be taken if someone is bitten by a venomous snake and the need for immediately transporting the victim to a hospital where anti-venom is available for proper treatment by a qualified medical team. Another important issue that was addressed was the practice of snake charming in our country. Exoticized as ‘tradition’ in India, the profession of snake charming is one that is rife with cruelty and mistreatment of snakes. Every year thousands of snakes are poached from the wild and subjected to devastating procedures such a defanging & having their mouths stitched shut to prevent any mishaps during handling by the saperas (snake charmers).

The interactions helped bust some popular myths and false perceptions about snakes that help people to get rid of unfounded fear. The audience developed a better appreciation and understanding of these much maligned reptiles and expressed a willingness to coexist with them. We are grateful to the Bombay Natural History Society (BNHS) for making us a part of this wonderful program and for extending their support to our organization.