9:00 a.m. on an typical Sunday morning, a resident of Pimpalgaon Siddhanath village located in Junnar division of Maharashtra woke up to the rather unusual cries of an animal in distress. On further investigation, he realised that the loud and panicking noises were echoing from deep within the well, close to his house and was shocked to find a leopard trapped inside the nearly 60 feet deep well. The farmer immediately contacted the Forest department, who in turn placed an emergency call to the Manikdoh Leopard Rescue Centre, run by Wildlife SOS in the area.

Villagers in rural Maharashtra are quite accustomed to catching occasional glimpses of these elusive cats that reside in the scrub forests which is their natural habitat. Leopards are often spotted in this area, as there are several sugarcane fields that provide a safe cover of these animals, who are struggling to find a foothold in the vanishing forests due to habitat modification.

At about the same time, the veterinarians and keepers at Wildlife SOS’s Manikdoh Leopard Rescue Centre were starting their day with routine rounds of the facility and feeding the 31 rescued leopards under their care.  On being alerted to the incident, a three member rescue team led by Wildlife SOS veterinarian Dr. Ajay Deshmukh along with six forest department officials rushed to the location, about 20 kilometres from the centre.

A rescue strategy had to be set in motion almost immediately, as the terrified leopard was on the verge of drowning and was desperately clinging onto a rope to stay afloat. The team had to come with the swift plan of building a wooden platform that was then lowered into the well to give the leopard a chance to clamber out of the water and onto a safe space before lowering a trapping cage in. However, the sight of the cold metal cage aggravated the already petrified big cat and it even took a few swipes at it, only to end up losing its balance much to everyone’s dismay. After regaining a hold on the platform and realising that the trap cage was its last hope for survival, in a swift movement the leopard jumped into the box. 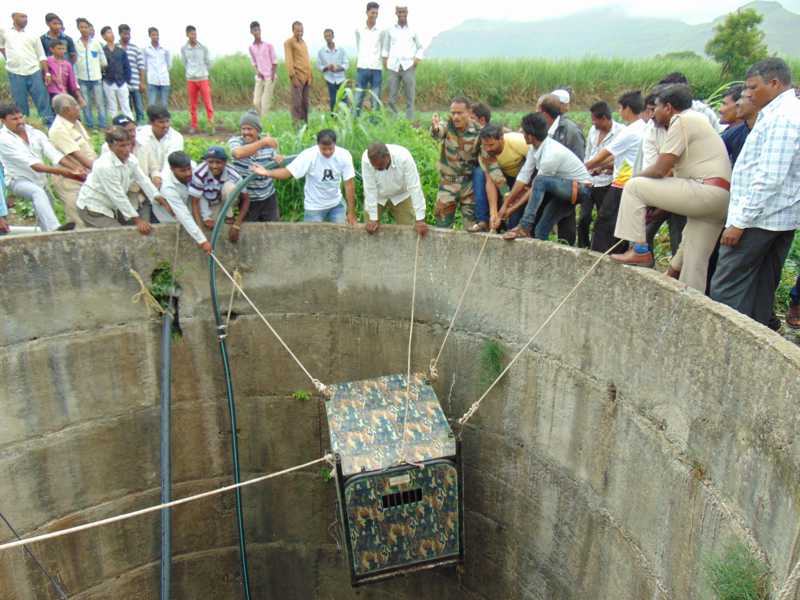 With the help of the forest department officials and concerned villagers, they were able to safely extricate the scared animal from the well, thus successfully rescuing it from an extremely dangerous, near-death situation. The leopard, a four year old female was transferred to MLRC were Dr. Ajay and his team conducted a thorough physical examination to ensure that the animal was unhurt.  It was found to be in good health and was later released back into the wild.

Due to lack of proper net covers, a large number of wells in Maharashtra villages remain exposed thereby increasing the risk of wild animals getting trapped in them. Wildlife SOS works closely with the Forest Department in carrying out similar rescue operations in the state, which is blessed with a large leopard population who are unfortunately often caught in several conflict situations due to loss of natural habitation.

Rescue operations such as this one tends to be very challenging as the animal is scared and  Furthermore, the safety of both the animal and the public also need to be made into a priority.

You can catch the entire rescue video here; https://www.youtube.com/watch?v=1f-VzIDygbo