What is musth?
Musth is a completely natural phenomenon seen in healthy adult bull elephants, both tuskers and makhnas (tuskless bulls). Generally characterised by the secretion of a hormone rich substance called temporin from the temporal gland (on either side of the elephant’s head) and a steady trickle of urine down the back legs of the elephant, musth involves a rise in the reproductive hormones in the elephant’s body. This causes the animal to feel more restless, energetic, aggressive or unpredictable – and generally irritable and oversensitive to sounds and movements. Musth is seen in healthy adult bull elephants.

How long does musth last? Is the length and duration of musth a sign of health?
Musth is a natural and healthy phenomenon in adult bull elephants. If a bull elephant goes into musth, it is generally considered a sign that he is healthy. Musth typically lasts between 2-3 months and occurs in three stages – a 3-4 week premusth condition, a 4-5 week peak musth, and a 4-5 week post-musth condition.

For elephants in captivity though, the condition and its duration can vary greatly. Deprivation of food and nutrition can cause the elephant to go into musth less frequently and for shorter durations of time. For bull elephants that have easy access to nutritious food and are in good health, musth can last much longer – records of healthy bulls in captivity have shown them staying in musth for more than a year.

Read “Musth and the Challenges of Caring for Bull Elephants.”

Why aren’t males kept together? Why don’t they interact as much as the females?
In the wild, female elephants live in herds, and form strongly bonded family units. Males only remain in the herd while they are young, and eventually leave to become solitary animals. Although bull herds have been observed, they are extremely rare. In addition, when bull elephants are mature, they begin going into a periodic phase known as musth, characterised by high levels of testosterone and a spurt in energy, during which they show heightened aggression and unpredictability. Note that musth is perfectly natural in a healthy bull elephant.

When a rescued elephant is first brought to Wildlife SOS, we give them time to settle in and move past the quarantine period (in case they have infectious diseases that can be passed to the other elephants), and then gradually begin introducing them to the other elephants.
In females, this is always easier, as they find their own friends, families and herd and settle in. For example, Peanut and Coco were quickly accepted into Asha’s herd, and are being fostered by the older females in the group.
With the males, this has to happen in a controlled environment and never when either male is in musth. Not all males take to each other, and this is perfectly natural for adult bulls, so we do not force interaction either. Some males do interact with each other comfortably, and when neither is in musth, we take them on walks together. For example, Wally and Mohan sometimes go on walks together.

However, it is always safer and more advisable to keep bull elephants in separate enclosures and limit their interaction to short and carefully supervised sessions. 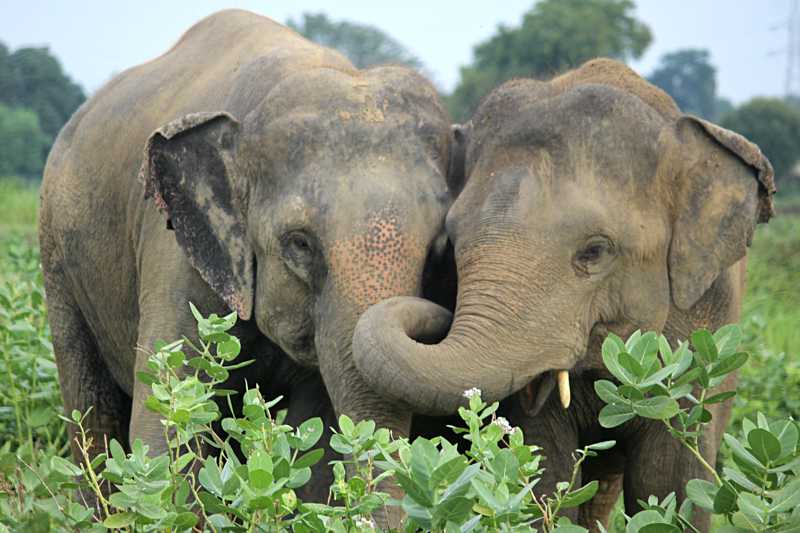 How are the vets and caretakers able to safely treat and care for a male if he’s in musth? Is he safe to be around?
It is generally not advisable to work with a bull elephant in free contact (ie with direct access to the elephant) if he is in musth as he is prone to aggression and can be easily irritable. However, since our bull elephants are rescued from terrible conditions in captivity, they require constant medical attention and are constantly undergoing some treatment, for which the mahouts and vets need access to them even when they are in musth. In order to do this, our vets work with the bulls in a set up known as protected contact, where a specially designed barrier, called a Protected Contact Wall, separates the vet and the elephant. The elephant is trained using humane and scientific techniques like Target Training and Positive Reinforcement to cooperate during treatment in exchange for treats. The PC wall and this training helps our vets work with the elephants even when they are in musth, in a manner that is safe for both the vets and the elephant.

How do you manage and treat an elephant in musth?
When an elephant is in musth, his walks are limited, but he continues to undergo target training and positive reinforcement training in his enclosure. The bulls are restrained during treatment to avoid any threat to the safety of the vet, keeper or elephant. Free access to water is extremely important, to allow the bull to cool down, stay hydrated and expend extra energy. The musth bull’s diet is adjusted to avoid high calorie food.
The bulls are carefully monitored by the vets and keepers to check for any changes in behaviour that could indicate trouble mental and physical health-wise.

Is Raju isolated from the other elephants during musth?
Raju, like all our elephants, remains in the same enclosure during musth as he is in when not in musth. He is not ‘isolated’ or moved to a separate enclosure when in musth. Our enclosures are designed to allow limited interaction between bull elephants, and so there is no need to relocate or isolate an elephant when he is in musth. Our bulls only interact if they are in adjoining enclosures, or when out on their walks – this is done in a controlled, safe and carefully supervised environment keeping in mind the bulls temperament – it is never done when either bull is in musth.

How frequently does a bull go into musth?
Musth is an annual phenomena in bull elephants, and generally lasts between 3-4 months, but the duration of musth can vary taking into consideration factors like captivity and the mental and physical condition of the elephant. (See above) 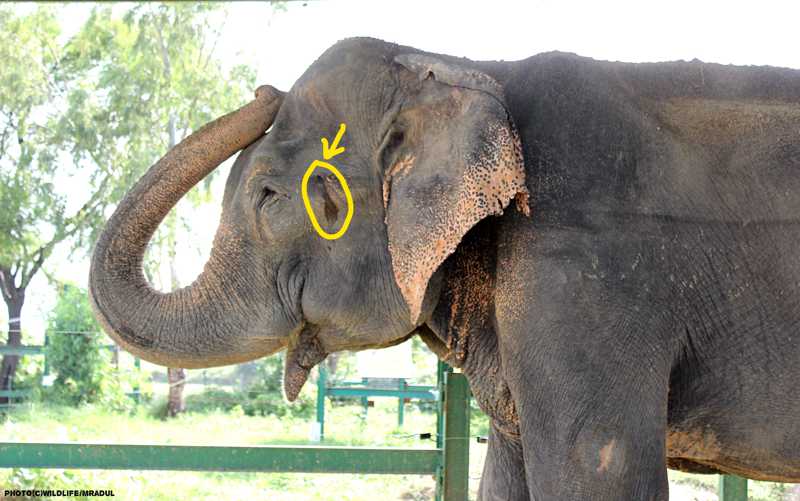 Does an elephant smell different when in musth? Does it smell to anyone other than a female elephant?
Musth fluid/secretion or temporin has a distinctive strong odor which can be smelled by human beings as well. It is however easier for female elephants to smell temporin and use it to determine the sexual maturity and condition of the male- this is because the sense of smell of an elephant is much more developed than that of a human being.

Are there signs (physical or behavioural) of musth?
Generally characterised by the secretion of a hormone rich substance called temporin from the temporal gland (on either side of the elephant’s head) and a steady trickle of urine down the back legs of the elephant, musth involves a rise in the reproductive hormones in the elephant’s body. This causes the animal to feel more restless, energetic, aggressive or unpredictable.

What changes are made to an elephant’s diet when it is in musth?
Our bulls continue on their regular diet when they are in musth. They are given nutritious green fodder and fruit and vegetables everyday along with vitamin and mineral supplements in a concentrate bolus of horse gram porridge and jaggery.

Do castrated elephants come into musth?
An elephant that has undergone a vasectomy would come into musth as the procedure does not affect hormonal changes in the body. Castration is extremely difficult in elephants due to the depth of the location of the testicles within the elephant’s body. However, elephants are rarely castrated as this is an extremely complicated process, and illegal elephant owners often breed their elephants in captivity and hence would not benefit from castrating them.