In the sweltering heat of the afternoon sun, a lone hyena wanders into a field in the outskirts of Sarbathpur village, Agra. Curious yet wary of this unknown surrounding, the hungry and parched animal sets out in search of food and water, but little did it know that its unexpected visit would result in such a violent and brutal ending.

A group of villagers passing by the field noticed the unusual looking animal and rushed to alert the others of the intruder in their territory. Fearing for their lives, they decide to take matters into their own hands and chase after the hyena, with bamboo sticks and ropes in hand. On catching up with the scared and confused hyena, they start beating it up with the sticks and tie up its legs together to prevent it from escaping. Its agonising cries pierced through the sounds of the hostile mob thrashing its fragile body, but made little difference to its violent attackers.

The Forest Department received word about this violent incident from the local police and immediately contacted the Wildlife SOS team in Agra, following which a rescue team along with a few forest department officials were deployed to the location.

They were horrified to find the hyena lying helplessly on the ground and covered in bruises. It was unable to move an account of the brutal assault by the mob and was in critical condition. It was bleeding from its head; its eyes were swollen and it was struggling to take deep breaths. The team gently lifted its limp body into the rescue vehicle and rushed back to the Wildlife SOS’ Agra Bear Rescue Facility.

Senior veterinarian Dr. Illayaraja and his team had already stationed themselves at the Operation Theatre, ready to administer an immediate and critical medical examination to determine the extent of its injuries. The inspection revealed that the hyena has sustained multiple body wounds and had suffered a severe head trauma after receiving repeated blows to the head. This resulted in inflammation of optical nerves which led to temporary loss of vision in both eyes.

According to Dr.Illayaraja, the hyena was in an extremely critical state when it arrived at our centre.  The animal has sustained multiple body wounds and has suffered an inflammation of optical nerves due to the severe head trauma. He also confirmed that the hyena was a four year old female. Unable to eat by itself; the hyena was placed on an IV drip and is receiving the necessary medical treatment for its injuries.

“It is truly heart-breaking to see an innocent animal suffer such a brutal fate due to the rash and violent action of the villagers. There is an imminent need to educate the public to increase tolerance towards wild animals in an attempt to mitigate human-wildlife conflicts. The Striped hyena (Hyaena hyaena) is species of Hyaena that is found in the Indian subcontinent and listed as Near Threatened in the IUCN Red list. It is also protected under Schedule III of the Wildlife Protection Act, 1972”, said Kartick Satyanarayan, Co-Founder of Wildlife SOS.

On further examination, the vets found signs of  mild internal bleeding and inflammation but fortunately there were no bone fractures .The hyena is responding well to the treatments and is able to stand and move on her own. She is able to take in solid food and is now consuming meat. Wary of the new surrounding and still in slight pain, the animal tends to get aggressive when approached by the keepers and vets. 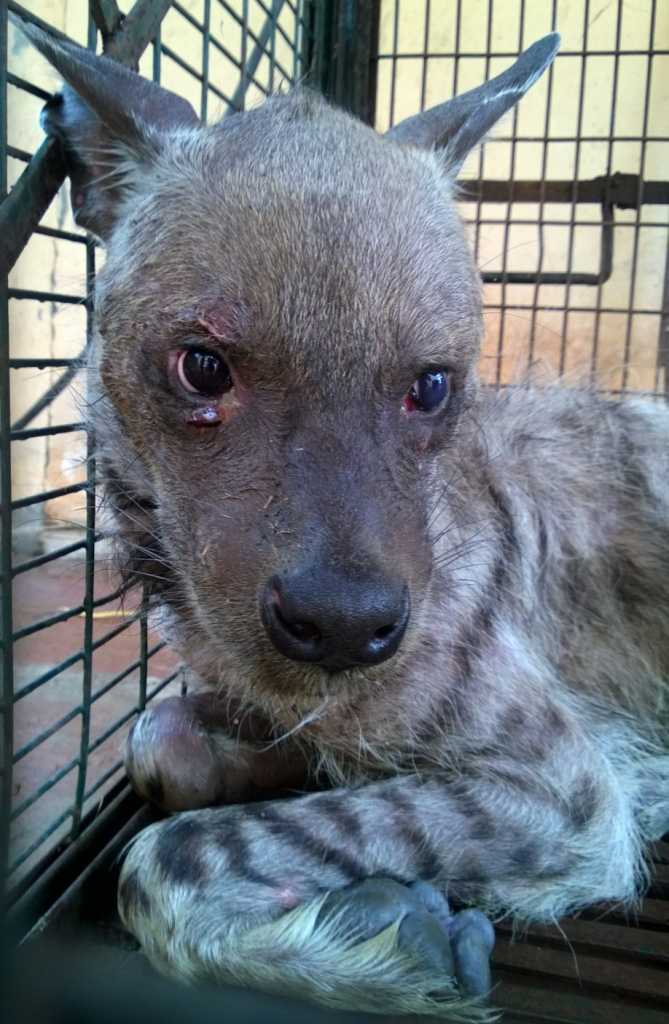 Hyenas are a greatly misunderstood species and often targeted by poachers for their fur and meat, as well as for other body parts that are mistakenly believed to have aphrodisiacal properties .In the past few decades, there has been a significant loss in the natural habitat of wild animals, as a result of increasing human encroachment into forested areas. This has also led to the depletion of territory and prey base of wildlife species residing in these environments and animals such as hyenas are forced to venture into human settlements in search of food and water for survival. Most often they prey on domestic animals and livestock which results in human-wildlife conflicts. Therefore, it is imperative to educate the local communities about conservation ethics and to inspire them to coexist with the wildlife that lives in close proximity to human settlements. There is also a need to teach them appropriate measures to avoid such brutal conflicts in the future.