For mother leopards in Junnar, parenting takes on a whole new realm of concern. Besides the overwhelming challenge of rearing a young, helpless cub in the jungle – protecting and feeding it from infancy – these feline females are faced with the additional task of protecting their young from the threats of anthropogenic factors. As their homes are destroyed by rapid urbanization, growing human populations and expanding farmlands, local wildlife struggles to continue to survive and future generations of Junnar’s leopards are at a much larger risk than ever before.

Open wells are just one symptom of the problem. Scattered through the irrigation systems of the sugarcane fields – these deep abysses of water are the lifeline of Junnar’s farming communities, but spell death for its wild residents. On Tuesday, a young male leopard cub wandered a bit too far into the bordering village of Kolwadi in Pune district, and stumbled into a well at the fringes of the forest.

Finding himself engulfed in twenty feet of water, the cub would have faced agonizing hours struggling to breathe as his mother stood helplessly above – unable to help, and always wary of any approaching human beings, aware of the potential danger they posed should they stumble upon an adult leopard in their fields. The cub eventually reached the water pump in the well, and grabbed on with its small slippery wet paws, clinging onto it with all his strength.

Above him, his mother is forced to hide in the nearby jungles as crowds of local villagers amass to catch a glimpse of the fallen feline. Eventually hope comes in the form of a local reporter, who comes to check what the commotion is about. He calls the local Forest Department, who in turn patch the call through to the Wildlife SOS rapid response unit at the Manikdoh Leopard Rescue Centre, 50kms from Kolwadi.

By the time the five member Wildlife SOS rescue team from MLRC is alerted and arrives at the site, the leopard cub had been trapped in the well for well over two hours, and time is running out quickly to save his life.

The cub is seven months old, as ascertained by Wildlife SOS senior veterinarian Dr. Ajay Deshmukh who is heading the team and coordinating the rescue. Tranquilising it is out of the question, as it will drown if rendered unconscious – and so the team lowers a crate into the water beside the leopard for it to climb onto. The dry safety of the crate is not enticing enough for the terrified cub, who refuses to climb on. The exercise is repeated with an open platform, with no success. 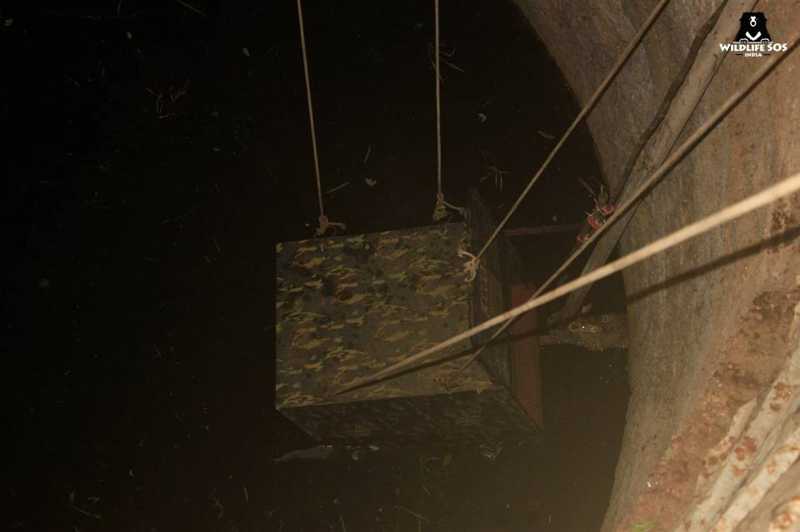 The crowds continue to grow, over 2,000 people crowding the rescuers, further agitating the already stressed animal – and the rescue team and local Forest Department have to get the crowds under control before proceeding with the rescue. Finally, some villagers come forward with helpful information – the mother leopard has been spotted twice in the vicinity, giving the team hope that when they get the cub out, a sure reunion with the mother is on the cards.

Ultimately, Dr. Ajay instructs the team to lower a trap cage into the water. As soon as the little feline stumbles into the waiting trap cage, desperate for the safety of steady ground under his feet, the team from above drops the cage door, securing the cub inside. The cage is lifted out of the well and Dr. Ajay gets his first close-up examination of the leopard. A sigh of relief as the veterinarian concludes his examination and declares that despite the stress of the entire ordeal, the leopard cub is unhurt – and fit to be released.

Finally, after a grueling seven hour rescue operation, the cub is freed into its natural habitat, back to the safety of its mother’s care – and back to a fighting chance at survival in the wild. 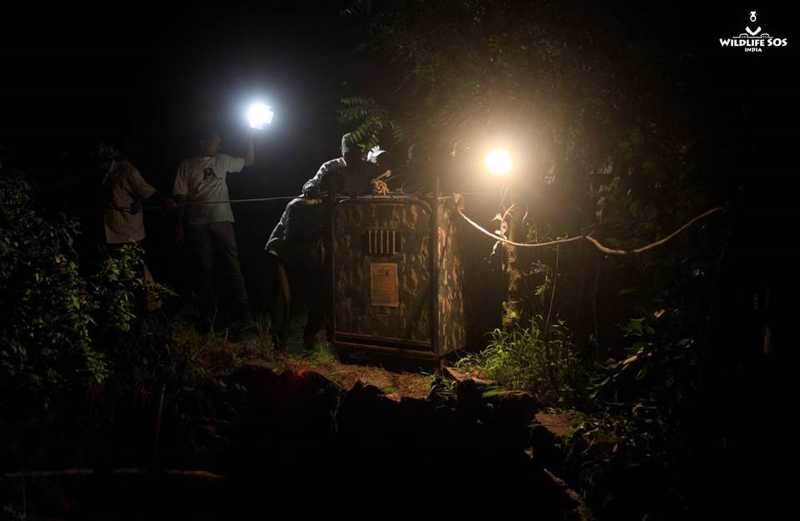 To address the issue of uncovered wells, and the wild lives they continue to threaten and sometimes claim, Wildlife SOS has been running a petition to have these wells covered or fenced off, and has garnered over 6,000 signatures by way of support to the cause. The petition is available at this link.