In yet another successful rescue and conservation operation, Wildlife SOS in collaboration with the Maharashtra Forest Department managed to reunite a young cub with its mother on the outskirts of Sablewadi village in Shirur. So far Wildlife SOS has been able to reunite 40 lost or injured cubs with their mothers, and in the process creating heart-warming happy endings.

The cub was discovered by the residents of Sablewadi village while harvesting their crops and being concerned about their safety and to avoid any unwanted confrontation, promptly informed the forest department who in turn contacted Wildlife SOS. Upon receiving the call, a team of experts was promptly dispatched from the Wildlife SOS Manekdoh Leopard Rescue Centre at Junnar, located about 50 kms away from the village accompanied by a few officers from the Forest Department.

The cub was identified as a male, approx. 30 days old. After a thorough medical examination by the Wildlife SOS, Senior Veterinarian, Dr.Ajay Deshmukh, the cub was found to be healthy and fit for release. Meticulous arrangements were made for the reuniting operation, and the cub was carefully returned to field in the hope that the mother would come back and find the cub where she had left him. Fortunately the operation was successful in the first attempt and after two hours of waiting patiently, the mother leopard appeared from the forest and carried away her young one to safety. 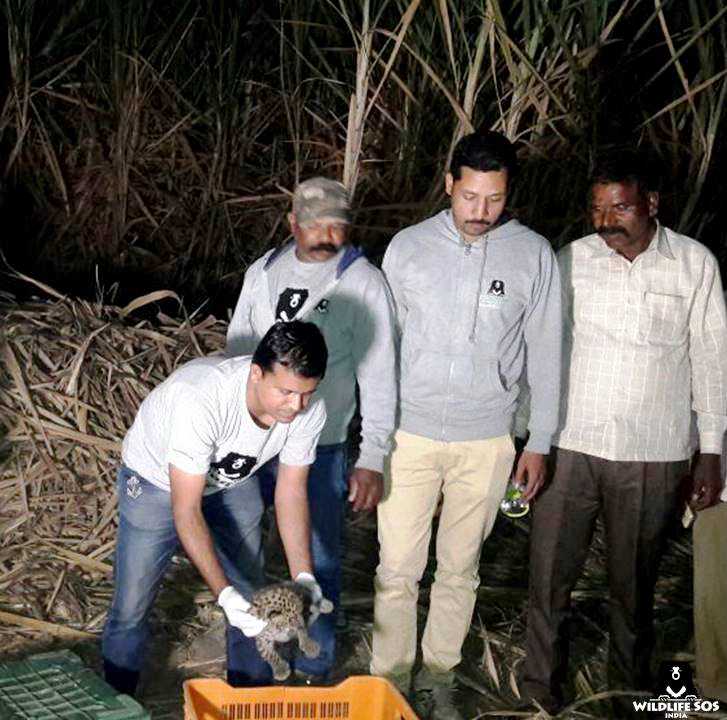 As leopards are territorial animals it is essential to release them in the vicinity of where they are rescued. Initially the team was met with hostility from the villagers who were apprehensive and insisted that the cub be taken away from the area for their own safety. However, they were more understanding of the situation on realizing that in doing so, the enraged and stressed mother would pose a bigger threat to them.

In order to survive in the wild and learn the skills of survival, it is crucial for leopard cubs to be reared by their mothers for the first two years of their lives. Shirur range is home to a large population of leopards and they are often are caught in various conflict situations. To prevent unnecessary capturing of leopards and placing them in captivity Wildlife SOS reaches out to local communities to increase understanding about leopards. The pre harvest and harvest season tends to have increased leopard sightings and conflicts because the dense and tall vegetation makes for a convenient shelter for the leopards to give birth in. During harvest, farmers often come across cubs hiding in the field while their mother is away foraging for food. Over the past many years, Wildlife SOS has been tirelessly raising awareness about the issue in man-leopard conflict prone villages which has now brought about a considerable and positive change in the attitude of people towards leopards who now view them as co-habitants instead of enemies.