As dawn broke over Somatwadi village, located a few kilometers away from the bustling city of Pune, seasonal farmers woke up to another busy day harvesting their sugarcane crops. Around the same time, a mother leopard decided to venture out to the neighboring forest to hunt while leaving her young off-springs hidden safely amidst the tall dense thickets. With little forest cover left for foraging, hiding and to live in, female leopards find the tall dense, sugarcane fields a suitable shelter for giving birth and rearing their cubs.

However, it wasn’t long before the two baby leopards were discovered by the farmers. Barely able to open their eyes as they sat huddled together, the cubs were helplessly mewling for their mother. Worried that they would incur the wrath of the mother leopard if they attempted to move them away from the field, the farmers contacted the Forest Department and Wildlife SOS to intervene so this would not escalate into a human wildlife conflict situation. Such problems are faced quite frequently by villagers residing near the scrub forests of Maharashtra, which is the natural habitat of a large population of leopards. 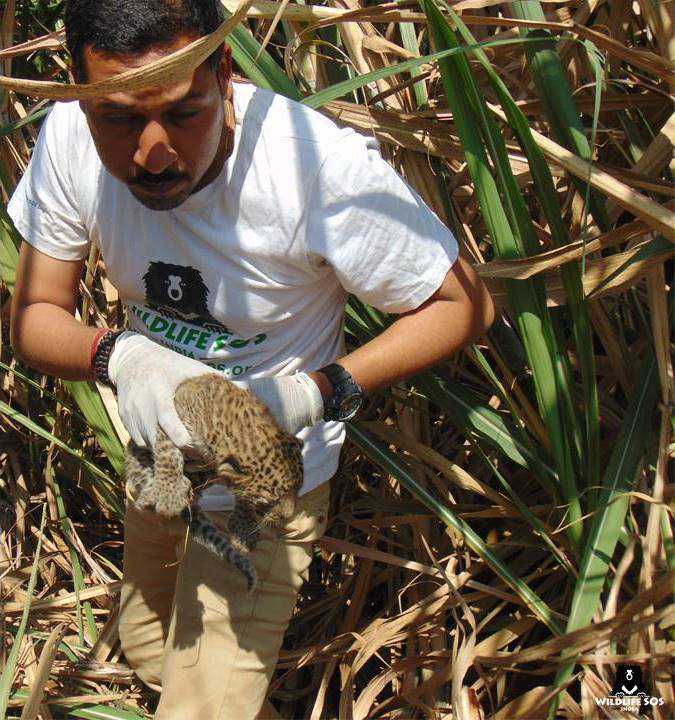 The two leopard cubs, identified as a male and a female, were estimated to be about twenty-one days old. They were scared and yearning for their mother’s presence.  After conducting a meticulous veterinary clinical examination for parasites and injuries, the cubs were found to be in good health and fit for release.

The challenge now was to reunite these helpless cubs back with their aggrieved mother who was reported to be lurking around the village in search of her missing cubs. Our team carefully placed the two cubs in a safe box and placed this in the field where the leopard was last sighted. The team then placed two remote controlled camera traps to document the leopard cubs and the reunion process, while monitoring the area from a distance.

Over the years, our rescue teams have successfully reunited over 40 leopard cubs that were lost, injured or separated from their mothers but this was a first time ever documented rescue operation taken on camera traps, to be carried out by Wildlife SOS and the Forest Department. 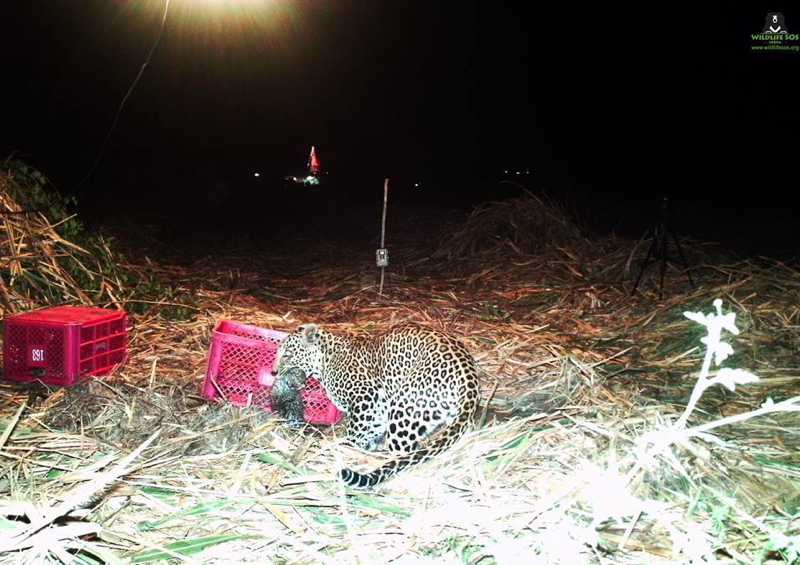 After a long wait of several hours, the female leopard called for the cubs and cautiously emerged from the forest, slowing walking up to the safe box from which she could hear her cubs mewling. Removing the cover of the box in a swift motion, she checked her cubs, carefully carried them by the scruff of the neck and vanished into the forest bringing a big smile on the faces of our team.

Wildlife SOS makes every effort to make such rescue and reunion operations possible. It is crucial for leopard cubs to grow up with their mothers as they learn their skills of survival such as stalking, hunting and locating their prey from their mothers in the first 18 months of their life. We like to ensure that these leopards don’t end up in captivity and have a chance to return to the wild, where they can live freely in their natural habitat.

CLICK HERE to watch the reunion video captured by the camera traps.