Just days after a nine month old female sloth bear was rescued from a deadly poacher’s snare on the outskirts of a forest in Gangadharan gudde, the Wildlife SOS team operating from the Bannerghatta Bear Rescue Center responded to another distress call about a wild bear that was reportedly trapped in a barbed wire fence outside a coconut plantation in Vittalapura village located in Turuvekere Taluk, Tumkur.

Local farmers were on their way to their fields when they heard the painful cries of an animal in distress. On getting a closer look, they were met with the rather pitiful sight of a small sloth bear caught between the wires of a fence. To makes matters worse, the bear’s left forelimb was caught in a poacher’s snare.  In a struggle to break free from the trap, the bear must have accidentally walked into the barbed wire fence surrounding the plantation. Farmers often set up barbed wires around their fields and plantations to prevent wild animals such as sloth bears, nilgais or wild boars from raiding their crops. Consequently, poachers often use this as a means to get easy access to wild animals by strategically placing snares and traps around these areas.

Concerned about the well-being of the animal, they immediately reported the incident to the Forest Department who reached out to our team for their assistance in the rescue operation.

A four member team from Wildlife SOS accompanied by five forest officers rushed to the aid of the distressed animal. After a quick assessment of the situation, Dr Arun. A. Sha our Director Veterinary Operations immobilized the traumatized cub with a tranquilizing gun before we could carefully extricate it from the wire fence and cut through the snare. 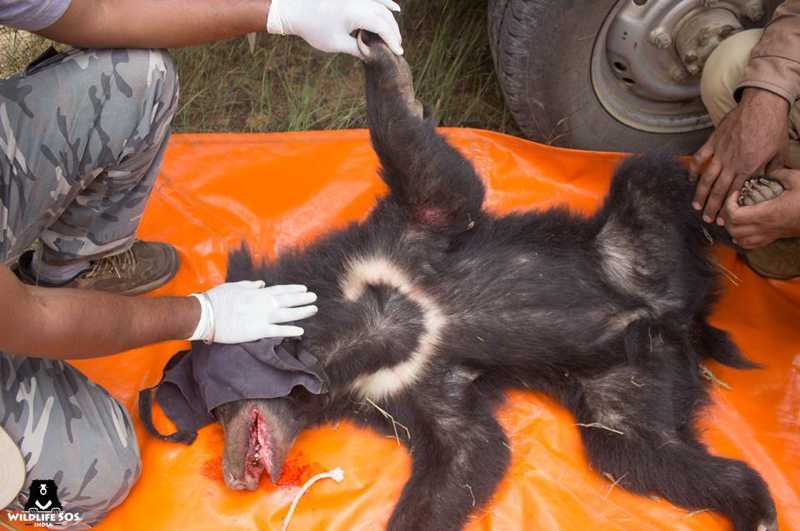 A thorough medical assessment was conducted after the wires and snare were removed and the bear was identified as an approx. ten month old male. He had sustained cuts and bruises on the left fore-limb and the area was swollen from being trapped in the tight grip of the snare for several hours. Moreover, there was visible bleeding in the mouth as the cub had tried to gnaw his way out of the wire fence. Our team cleaned out the teeth and gums, administered topical treatment for the wounds and gave the cub anti-inflammatory injectables. 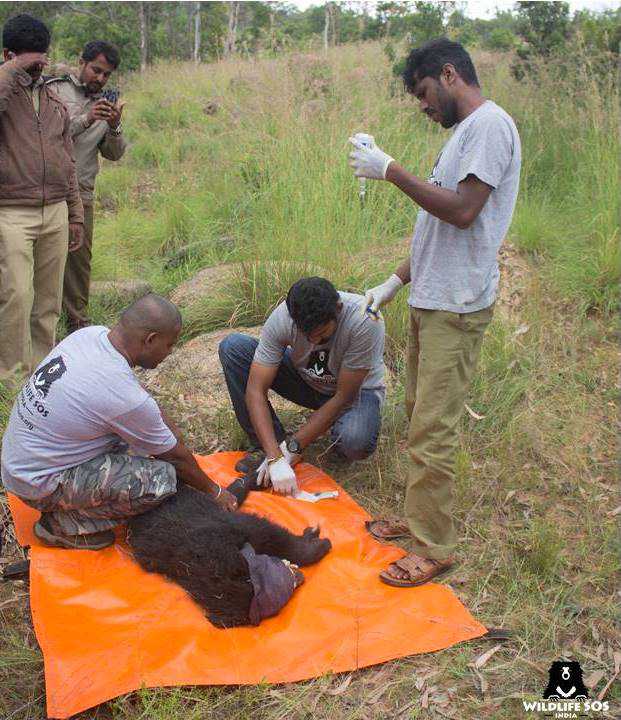 The worried mother was sighted in the vicinity but due to human intervention was not able to come near her offspring. Thus, after receiving necessary treatment, he was released within the same periphery so as to make his way back to his mother. As sloth bear cubs are dependent on their mothers for the first two years of their lives we wanted to ensure that the cub was reunited with her as soon as possible.

We are extremely fortunate to have had the chance to intervene and return the bear to the safety of his mother and their forested home. However, not all animals have the opportunity to escape from these indiscriminate killing devices that have to power to kill anything from a rabbit or porcupine to a bear, leopard and even tigers! Every year hundreds of wild animals succumb to snares, traps and explosive baits in India and the deaths of a majority of these victims of go undocumented. 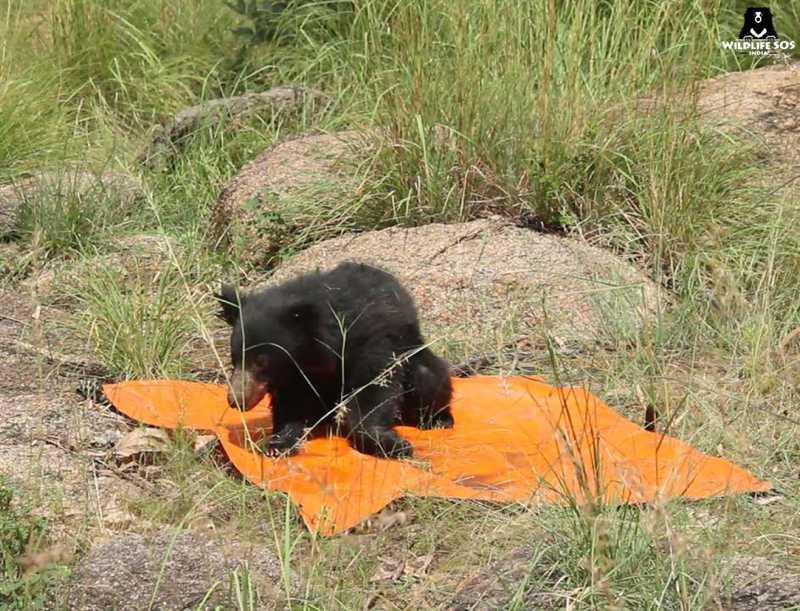 Measures have been taken by the Forest Department and Wildlife SOS to create awareness amongst the local community about learning to co-exist with the wildlife that resides in the neighboring forest areas and the illegality of committing such crimes against wildlife.

You can catch the entire rescue operation here: https://www.youtube.com/watch?v=HGg7uhIVW1o&t=1s