The distressed cries of an animal pierced through the stillness of the forest in the early hours of the morning, startling the occupants of Koratagere village. Upon further investigation, they were horrified to find a large sloth bear hiding amidst the bushes with a crude wire snare intertwined around its waist. Fearing for its well-being, the concerned villagers immediately reported the incident to the local Forest Department officials, who in turn contacted Wildlife SOS for their assistance.

Located in the Madhugiri range of Karnataka, this particular region is home to a significant population of wild sloth bears, one of the four unique bear species found in the Indian subcontinent. Over the years, their population in the wild has been threatened due to loss of habitat and poaching, making them a Vulnerable species under the IUCN Red Data List. A six member rescue team led by Dr.Arun .A. Sha of Wildlife SOS along with Range Forest Officer Mr. Chinnappa rushed to the location, with the necessary equipment in hand. In its attempt to break free, the bear had been struggling for hours causing the metal wire to tighten its grip around the helpless animal’s waist. According to the team, the snare was made up of a modified clutch wire, reinforced with a fence wire and judging by the condition of the bear, they suspected it to have been trapped for nearly 15 hours.

They had to act fast and cut through this barbaric hunting device before it caused any severe internal damage to the traumatized bear, which was already under immense pain. Dr. Arun had to first tranquilized the bear in order to cut open the snare and to conduct a thorough medical assessment, which was followed by treatment of minor external wounds on its body. The sloth bear was identified as a healthy female of approximately 4-5 years old. 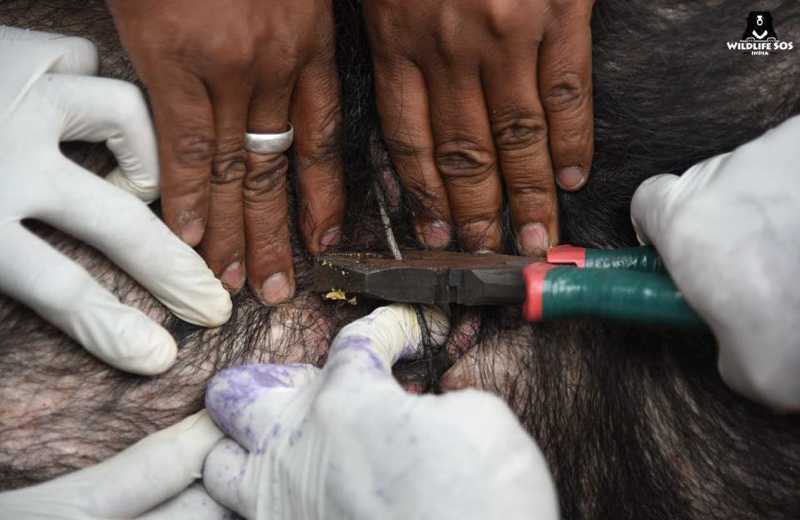 We are extremely fortunate that the bear did not sustain any severe injuries and that we were able to release it in the neighboring Thimmalapura State Reserve Forest, where it can continue living a free life in a natural environment. Meanwhile, the Forest Department is putting in their best efforts to track down those responsible for setting up this illegal hunting device and engaging in poaching of protected wildlife species in the area.

Snares are one of the cruelest human-created threats to wildlife and it is distressing to imagine the millions of animals that fall victim to these barbaric devices every year. Only a small percentage of these animals survive the horrors of these deadly traps and the deaths of a majority of these victims of poaching go undocumented.

Animals caught in snares and traps often struggle for hours, in some cases even days before succumbing to thirst, hunger, strangulation, internal injuries and even predation from carnivores. The animals that manage to escape often succumb to their injuries and die days or weeks after their painful escape. And this is not to mention the agony, terror, and anxiety that any trapped animal will experience.