It was night time in the Shirur district of Junnar in the Indian state of Maharashtra, and a five-year old female leopard found herself in the fields of Savidhane village, staring at her own reflection thirty feet below her in the clear water of an irrigation well. A rapidly growing population, coupled with the unchecked expansion of farmlands in the region has severely compromised not just the jungle territory of the leopards of Junnar, but also their water sources, and it is not uncommon to find the big cats wandering out of the jungles and into the neighbouring villages in search of water sources.
A slight misstep and the feline is sent tumbling into the deep well, where she spends the remainder of the night, clawing at the rocky walls and struggling to keep out of the water. She finds a small, dry outcrop on one edge of the well and perches precariously on it, desperately trying to scale the steep wall that separates her from freedom.

Early the next morning, a local farmer approached the well to turn on the pump, and was startled to see the helpless eyes of the trapped animal staring up at him from the well. He contacted the local Forest Department, which in turn called the Manikdoh Leopard Rescue Centre, run by Wildlife SOS in the region. A team is dispatched immediately, making the bumpy 70 km ride from the rescue facility to the village with a trap cage and additional equipment loaded onto the back of the vehicle. 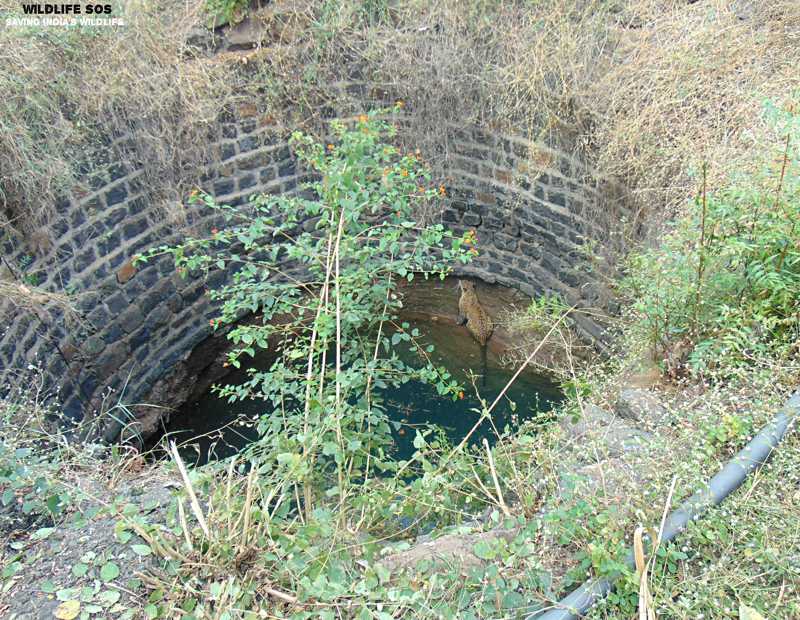 By the time the team arrived, a crowd had gathered around the well, with villagers swarming to the scene to catch a glimpse of the animal and take pictures of it on their cell phones. A few vagrants were throwing pebbles at the terrified animal to catch its attention, much to the anger of the rescue team.
“In incidents like this one, the gathering people and bystanders become our first priority, as it is impossible to conduct a safe rescue without controlling the crowds,” says Wildlife SOS senior veterinarian, Dr. Ajay Deshmukh, who runs the leopard rescue centre, “While a few members of our team assisted the Forest Department in pushing back the onlookers, we set up the trap cage.”

The cage was then lowered into the well, its open door angled towards the leopard. Almost grateful for a dry spot to move onto, the leopard clambered into the cage. From above, the watching rescue team shut the door and began raising the cage out of the well, the leopard safely inside. 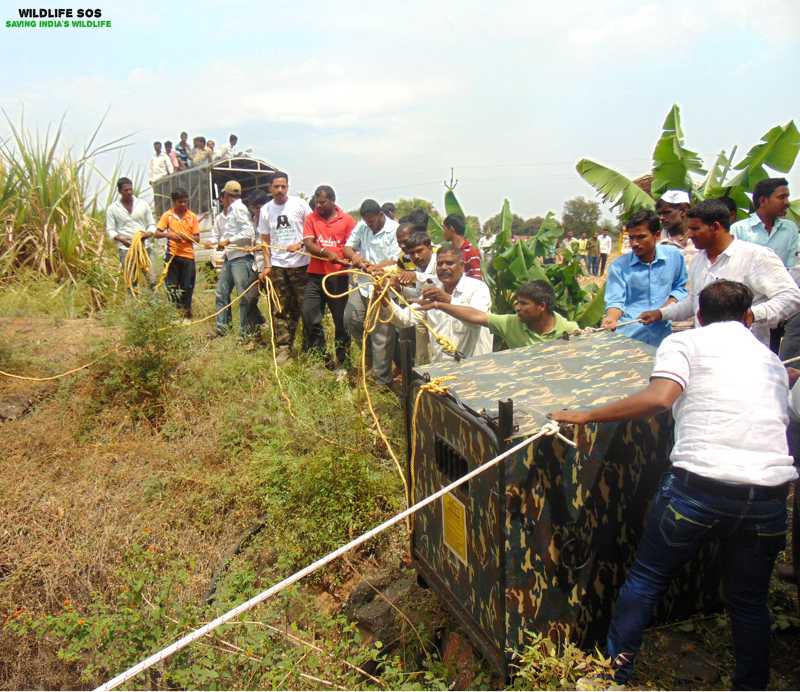 Dr. Ajay conducts a careful, thorough examination of the animal once the cage has been removed from the well.
“She was in shock initially, but luckily hadn’t hurt herself during the fall or taken in too much water. There were a few minor cuts on her paws, incurred during her desperate attempts to escape from the well,” he observes, “Besides that, she was a perfectly healthy, beautiful young animal.”

Deemed fit for release by the veterinarian, the leopard has since been freed back into its natural habitat. You can support similar rescues by becoming a monthly donor HERE.