The Hyena is a rather underrated species –often vilified in movies like The Lion King where they are depicted as the crafty, villainous sidekicks to the rogue lion Scar. Their cackle and the fact that hyenas are scavengers and carrion eaters further helped to intensify the mythological component surrounding the species. In folklore, hyenas are said to be the mounts of witches – when they stop to feed on carrion, the witches are said to feed on the soul of the dead. So you see, societal culture has turned the animal into a creature abhorred by us – a sad outcome for conservation efforts centered around this carnivore.

India is home to the Striped Hyena – and mostly found around areas like Rajasthan, Uttar Pradesh and Gujarat, where the myths about them originated. According to the IUCN (International Union for Conservation of Nature), the Hyena is a ‘near threatened’ species, with their population numbers dwindling day by day. As there is very less data available on the elusive animals, it is very hard to pinpoint their habitats and find ways to mitigate conflict. Hyena populations in India are far few and far in between, hence making it very difficult to keep tabs on them. Their erratic population density puts them at risk to the changes in land use as most human practices reduce their base and destroy their dens.

Many hyenas in India often undergo extremely horrifying trauma in human-wildlife conflict situations, or fall prey to automobile accidents and poacher’s snares. The country is home to 20% of the Hyena population in the world and their population is steadily decreasing due to hunting practices. Increasing anthropogenic pressure on their habitat and food sources has driven the animals closer to human settlements in search of food. 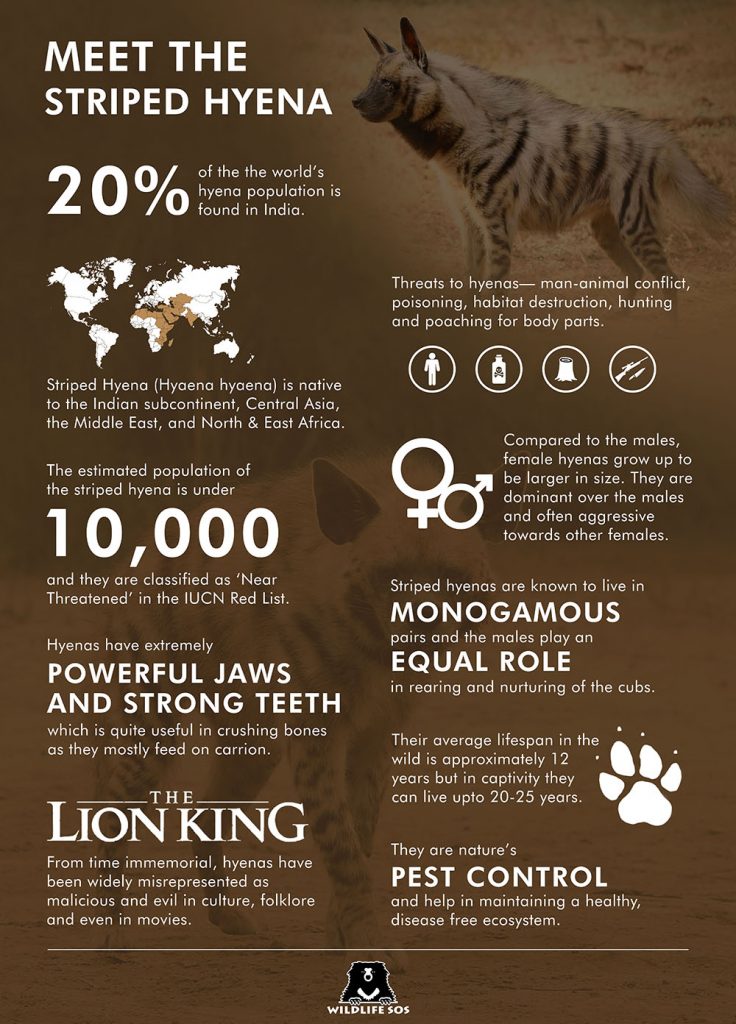 Hyenas are opportunistic carnivores who prefer eating carrion rather than hunting, though they have been known to hunt too, so trash bins around human habitats form a great food source for them.

Between the years 2015 to 2017, over seven hyenas were rescued and treated by Wildlife SOS from various conflict situations. Each of them required intensive medical care and often required months of recuperation to get back to being fit enough to survive in the wild. Some of them made it out without any lasting harm – but some were left with permanent disabilities like blindness, paralysis and other physical damage. Research by Wildlife SOS veterinarians found that these conflicts tended to increase in the winters, and female hyenas would venture into human settlements in search of food for their young, only to end up being cornered by scared villagers.

In a recent incident, an approx. 3 year old male hyena was brutally attacked in a village in Uttar Pradesh and brought to Wildlife SOS’ centre for treatment. The chances of survival appeared bleak as the animal had sustained severe spinal fracture leading to hind limb paralysis. Despite all efforts, the hyena succumbed to its injuries. Incidents such as this make it imperative for us to spread awareness about the species and sensitize the public to their plight, as they struggle to gain a foothold in the shrinking forests.

Hyenas play a very vital role in maintaining an ecosystem – apart from getting rid of biological waste by their scavenger habits; they also act as pest control. A healthy ecosystem depends on the balance between species, so the decline of an animal, especially one that plays such an important role in keeping an ecosystem clean and free of diseases should raise a modicum of alarm. Luckily, there are ways to ensure that the hyena is protected from harm and that people do not pay a price for it either. Providing compensation to farmers who lose livestock is a good way to begin – this way resentment is lower and so is backlash. Imposing strict fines for inflicting injuries on a wild animal and to bring the culprits to some form of justice is also required. Reinforcing awareness modules around fringe-forest communities in order to enable them to cohabit peacefully is of the utmost importance.