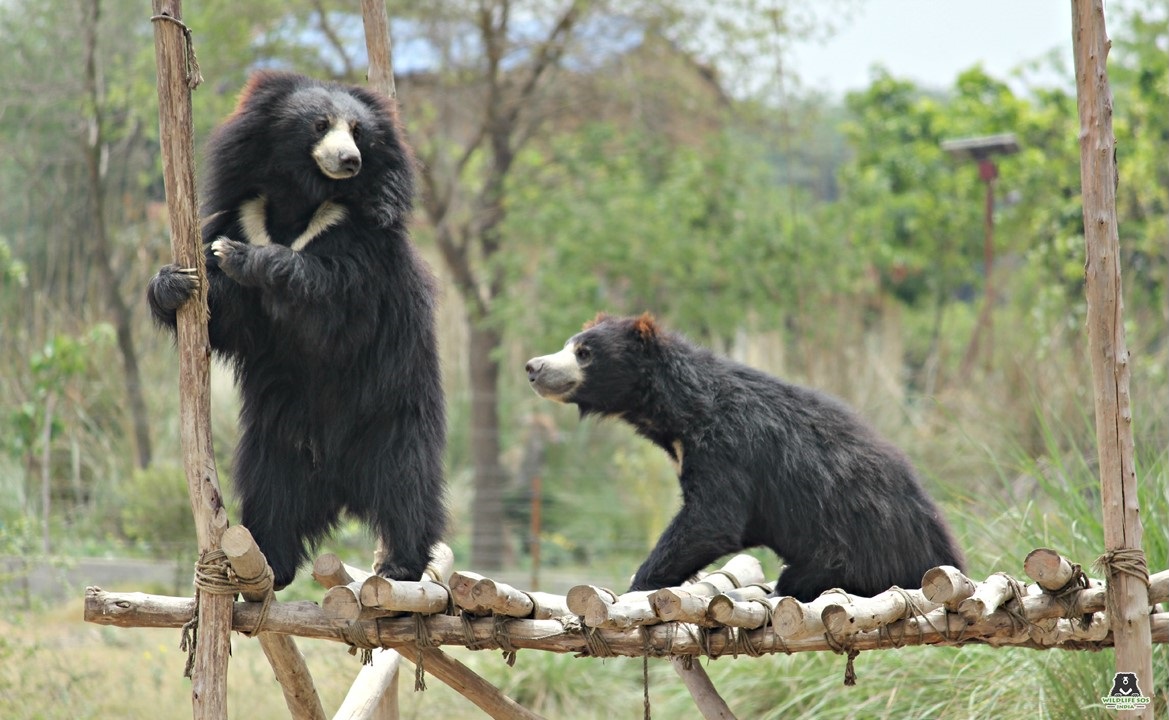 Sloth bears (Melursus ursinus) are a unique bear species, endemic to the Indian subcontinent, mainly India, Sri Lanka and Nepal. There have been reported sightings of the bears, distinctive with their shaggy coats and long, ivory claws bent inward, in Bangladesh and Bhutan, but they haven’t been sighted there in years leading rise to speculation that they may have died out locally. The sloth bear is currently under the ‘Vulnerable’ status on IUCN’s Red List and protected under Schedule I of the Indian Wildlife Protection Act, 1972. This species is threatened by habitat loss, poaching, and was previously captured for entertainment in the barbaric ‘Dancing bear’ practice in India; the 400 year long practice was brought to an end in 2009, by Wildlife SOS and the Government of India.

Even with minimal demand for ‘dancing’ bears today, sloth Bear cubs are still being poached for use in traditional medicines and gourmet cuisine in South-East Asia. This ongoing poaching, combined with habitat encroachment, continues to pose a serious threat to an already depleting population in the Indian Sub-Continent. Sloth bears are currently a declining population due to habitat destruction, poaching for body parts and hunting due to aggressive behavior.

Etymology and nature:
‘Sloth bear’ is a misleading name, as these bears have no similarities or resemblances to Sloths. In the first valid scientific description recorded in the 18th century, a doctor was tricked by its appearance and thought it was a ‘bear-like sloth’, hence the confusing name. Sloth bears have a long coat despite the relatively warm climate in India but the thick shaggy coat protects them from being bitten by their favourite food — insects! They also have a distinctive white patch of fur on the chest in the shape of a V or U. This species has a great affection for honey which they find in bee hives, earning the nickname ‘honey bears’!

Sloth bears have extremely large tongues, a mobile snout, and they can voluntarily open and close their nostrils, all of which prove helpful with their diet. Typical feeding behaviour of a sloth bear includes feeding on termites and ants by digging up their mounds, blowing off the dirt and dust, and then sucking up the insects like a ‘vacuum cleaner’. Sloth bears are mostly solitary in nature, except during mating season. Mother bears give birth to a litter of two to three cubs and are the only bear species that carry their young on their back. They are incredibly defensive of their cubs and can fight off predators that are twice their size if threatened.

DID YOU KNOW?
– Sloth bears are the only bears that carry their young on their backs.
– Their footprint is very similar to that of a human.
– Sucking sounds made by the sloth bear while eating can be heard up to a hundred meters away!

Why are Sloth bears endangered?
Like most wild animals, sloth bears are shy and elusive, and their primary instinct is to avoid human contact. However, aggressive human colonisation, fragmentation of wildlife corridors and loss of prey base in the wild has pushed them into human dominated landscapes where ironically they are blamed for ensuing conflict with humans on territories that were once their own. Until recently, hundreds of bear cubs were torn away from their mothers and used in the ‘Dancing bear’ trade, where a nomadic tribe called the Kalandars would force them to perform unnatural tricks for the entertainment of others. After aggressive legal action and petitioning, Wildlife SOS was able to bring an end to this practice and rescued 628 bears.

What does Wildlife SOS do?
Wildlife SOS has a three pronged approach to help conserve more bears from increasing threats – rescue of orphaned cubs, protecting victims of poaching and repatriation of ‘dancing bears’ from other places. This id done with a team of biologists and researchers dedicated to studying the denning patterns & ecology of wild sloth bears in the southern state of Karnataka.

Rescue of orphaned cubs: Mowgli was 2 months old when he came to Wildlife SOS. His story was one of many tragedies – his mother had fallen prey to electrocution by a high voltage wire set by poachers in Madhya Pradesh and he was found clinging onto his mother almost two days later. The cub was brought to the Agra Bear Rescue Center where he was hand-reared by our staff. In such cases, it is not possible to release the bears back into the wild even after they have grown as they lack the skills and natural instincts that is required to survive in the wild. Today, Mowgli is a healthy, active young bear who loves porridge, honey and loads and loads of fruit. Being the youngest bear at the lifetime care center, Mowgli is full of mischief and keeps his care givers on their toes!

Protecting victims of poaching: Elvis was barely 6-8 weeks old when he was taken by poachers who were planning on smuggling him across the Indo-Nepal border. Wildlife SOS found him chained to a tree, whimpering softly and scared of being left alone in a half starved condition. Had Elvis not been rescued, he would have been smuggled across to Nepal, to be sold into a life of misery and pain as a dancing bear, where this practise still persists. Like in the case of most captive sloth bears, he would have been forced to live his life in trauma, pain and agony, while being exploited as a source of cheap road side entertainment. Elvis now has the chance to simply be a bear again!

Repatriation of ‘dancing bears’: In December 2017, 19 year old Rangila and his companion bear Sridevi were both spotted on the Indo Nepal border and the Wildlife SOS team was tracking their movements. Unfortunately the traffickers who had the bears swiftly moved into Nepal territory where the Indian police and enforcement authorities no longer had jurisdiction. Thankfully, the bears were seized by the Nepal enforcement authorities and shifted to temporary housing at Kathmandu zoo while they awaited repatriation.

Although getting these bears off the streets was a victory, it wasn’t nearly enough as during this period, the female bear Sridevi sadly succumbed to her injuries. Rangila’s grit somehow helped him survive the worst, and finally after almost seven months of highly stressful calibration, he was transferred to the Wildlife SOS Agra Bear Rescue Centre where a lifetime of love and care awaited him. His journey from trauma to contentment has been heart-warming to follow.

Wildlife SOS bear denning project: The Wildlife SOS team based out of the Bannerghatta Bear Rescue Centre first initiated the unique project in 2014. Of all the eight bear species in the world, the sloth bears is the least researched. Spanning across forest divisions of regional Karnataka like Tumkur, Ramnagara, Daroji and Gudekote, this unique research project aims at understanding the biology, denning patterns and reproductive physiology of sloth bears using advanced scientific techniques.

The study so far has shown great potential. With the help of camera traps, we have been able to closely map the movement and monitor the behavior of these bears. The team has had the opportunity to collect data and monitor several wild sloth bears, as well as to analyze other wildlife species in the areas with the help of camera traps. They also identified over 500 resting dens and 42 maternal dens that were used by female bears to birth and nurture their cubs, across the six project areas in the Deccan Plateau.

MYTHS
– Sloth bears are aggressive!
In fact, sloth bears are shy and retiring. They only attack when confronted, and mother bears can specially be vicious while defending their young.
– Body parts of the Sloth bear help cure afflictions!
There could be nothing farther from the truth. Bear body parts have absolutely zero medicinal value and they do not cure illnesses, OR improve virility.
– The bears’ small size makes them easy prey for larger predators!
Untrue. Sloth bears can get pretty defensive, and their roars are used to express it. There’s a recorded incident of a mother bear scaring off not one, but two tigers with her roar while still carrying her cubs on her back.