Last year during the rainy month of September, the Wildlife SOS team was provided with the perfect field conditions that enabled them to successfully radio-collar Van Devi, the matriarch of 16 wild elephants. The radio-collaring of the matriarch was a part of a long-term strategy that Wildlife SOS team has been developing to mitigate the human-elephant conflict in Mahasamund, Chhattisgarh. The heart of the issue lies in the fact that these nomadic wild elephants have now established themselves at the safe haven of the forest nearby from which they often venture out to raid the crops, that is the primary source of livelihood for the villagers. 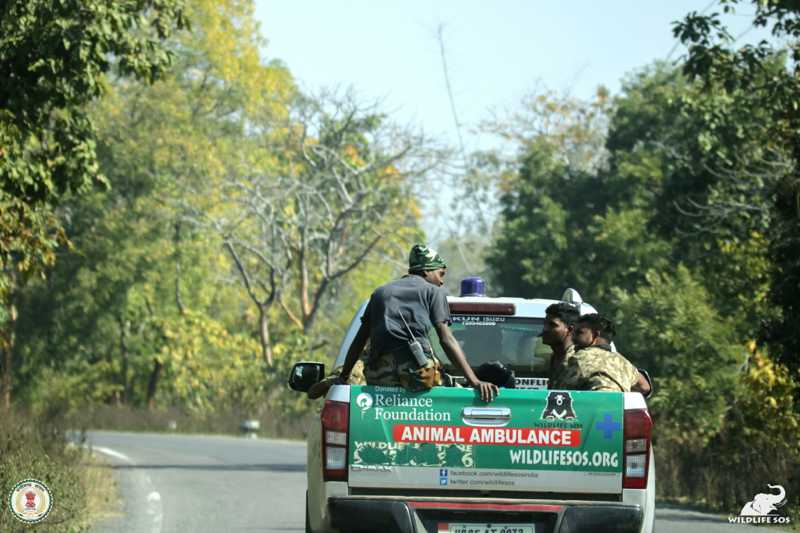 After observing that one of the solitary bulls, that was to be radio-collared, was in musth, the team decided that it was best to leave both the tuskers alone as they were exhibiting signs of aggression and we did not want to risk the safety of the on-field team. Therefore, as per the protocol, our expert team of veterinarians decided that they would wait for a green signal from the trackers and field-biologists before coming back to Mahasamund for another attempt at radio-collaring the bulls.

On the 15th of January, our team of veterinarians and documentation officer reached Mahasamund village to join the on-field team to try once again to radio-collar the bulls. Essential darting equipment, sedating drugs, anti-sedating drugs and the radio-collars were carefully packed. After meticulously discussing the possible scenarios for the mission, the team was more sure-footed and brimming with the much-needed energy to tackle this mammoth task that was ahead of them. However, it has been rightly said that no two days on the field are ever the same, and this time too the team was presented with fresh challenges every day. 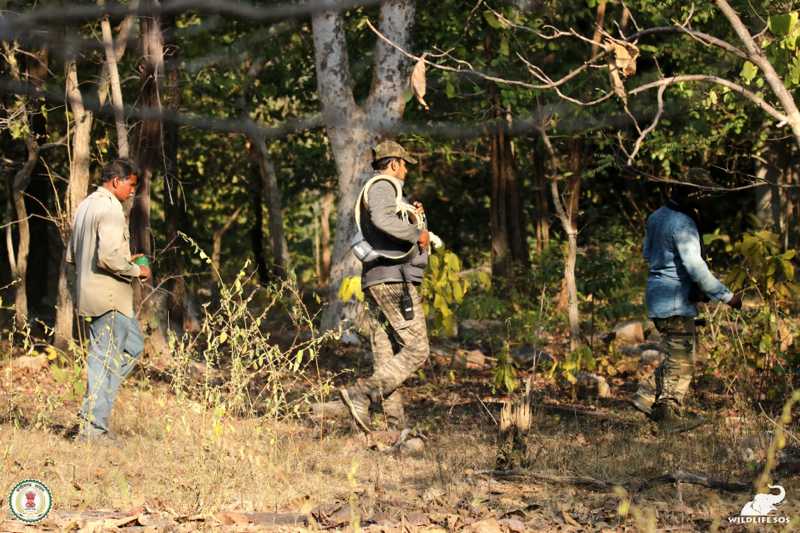 The dynamics between the herd and the two bulls was confusing to say the least. After a male elephant attains puberty, it gradually leaves the herd to lead a solitary life in the forest, only joining a herd when they sense a female is in heat and ready to mate. Naturally our team had been expecting to locate the bulls alone as they had so previously. However, the bulls were this time moving inside the forest either in close proximity to the herd or within the herd. Even on days when the herd would split into two for some opportunistic feeding, the bulls remained with either groups foraging on the bamboo, now growing in ample quantity inside the forest. The readings from the matriarch’s radio-collar proved to be extremely useful as it would give our team a head start about the last known location of the pachyderms and thus locating them became easier. The focal task of the team then became to diligently observe the herd from a safe distance to identify an opportunity when the tuskers would move away from the herd. 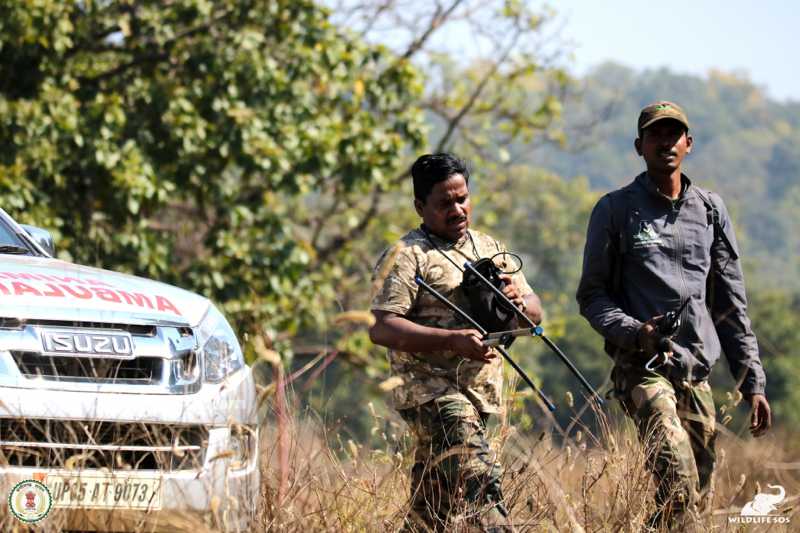 Furthermore, the physical conditions of the forest too added to the challenges of the team. The forest floor was covered with dry teak leaves that would noisily crush under the weight of our team members as they walked inside the forest. It is no secret that elephants have a keen sense of hearing and can even pick infrasonic sounds that are inaudible to humans. Thus, the crushing of the leaves would alert the herd, and they would become fiercely vigilant and stick together. The team had to always be on their toes to make sure that they did not disturb the vigilant herd. Moreover, much to the dismay of the team, the forest was brimming with dense undergrowth that acted as an obstacle for darting the tuskers from a safe distance. Despite these set-backs, the team were able to steadily continue with their tracking of the herd. 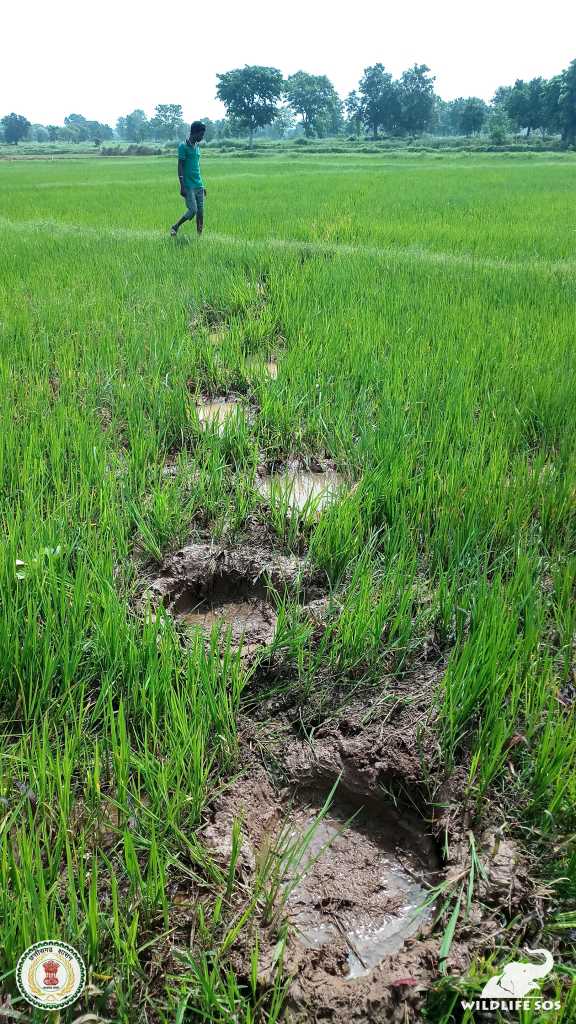 After spending nearly a week following the herd, the team finally located one of the tuskers alone. However, as the team inched slightly closer to more a comfortable distance to dart the tusked pachyderm, they were surprised to find the herd nearby. The herd was standing at a spot in a circle and there seemed to be a great deal of excited commotion amongst them. What the team found next was something that nobody could have guessed! At a short distance a spot was discovered that was marked with fresh blood and placenta pieces indicating that a calf had been birthed. On carefully examining the blood stains, our veterinarians concluded that the birth must have taken place only a few hours before the team located the herd.

Elephant pregnancies last twenty-two months and usually go undetected until the very end. After a calf is born, not only does it have the protection of its mother, but its family comprising of the grandmother, various aunts and cousins too who are fiercely protective of this new addition and ensure its safety at all times. As such, our team straightaway knew that the alertness of the herd would be at its peak till the calf was well-adjusted to the forest. Moreover, as the baby was less than a day old, attempting to immobilize the bull would affect the natural behaviour of the group and put the calf, who was just learning to suckle, under unnecessary stress. 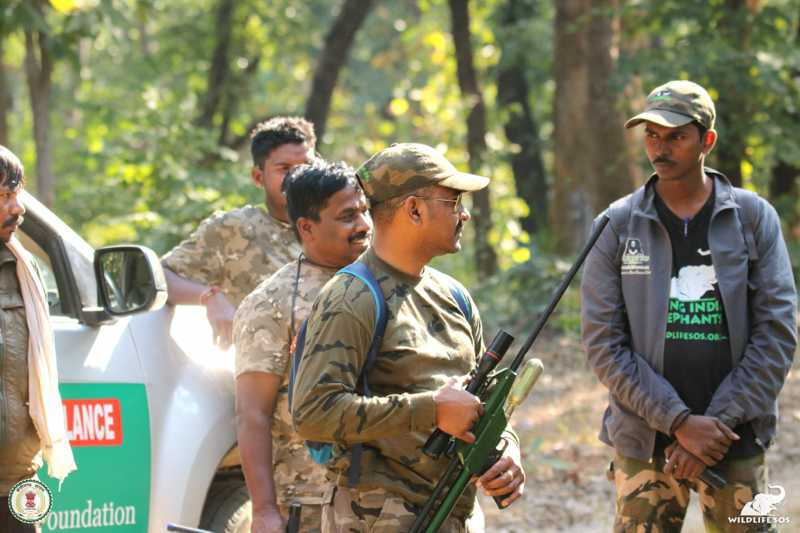 For ethical reasons, the team decided that it was best to abandon the mission this time and let the herd pamper this new elephant and toughen it for survival in the forest.Although the team was not able to fulfil their mission, the challenges that the team faced have given them food for thought. With these valuable lessons in mind, the team hopes to return to Mahasamund again during the months of spring, when the elephants are expected to venture out of the heart of the forest, and the physical conditions of the forest too will be favourable. Till then our trackers will continue with the task of tracking the tuskers and engaging with the community.

We would like to thank the Tennessee Elephant Sanctuary for their support with this project!