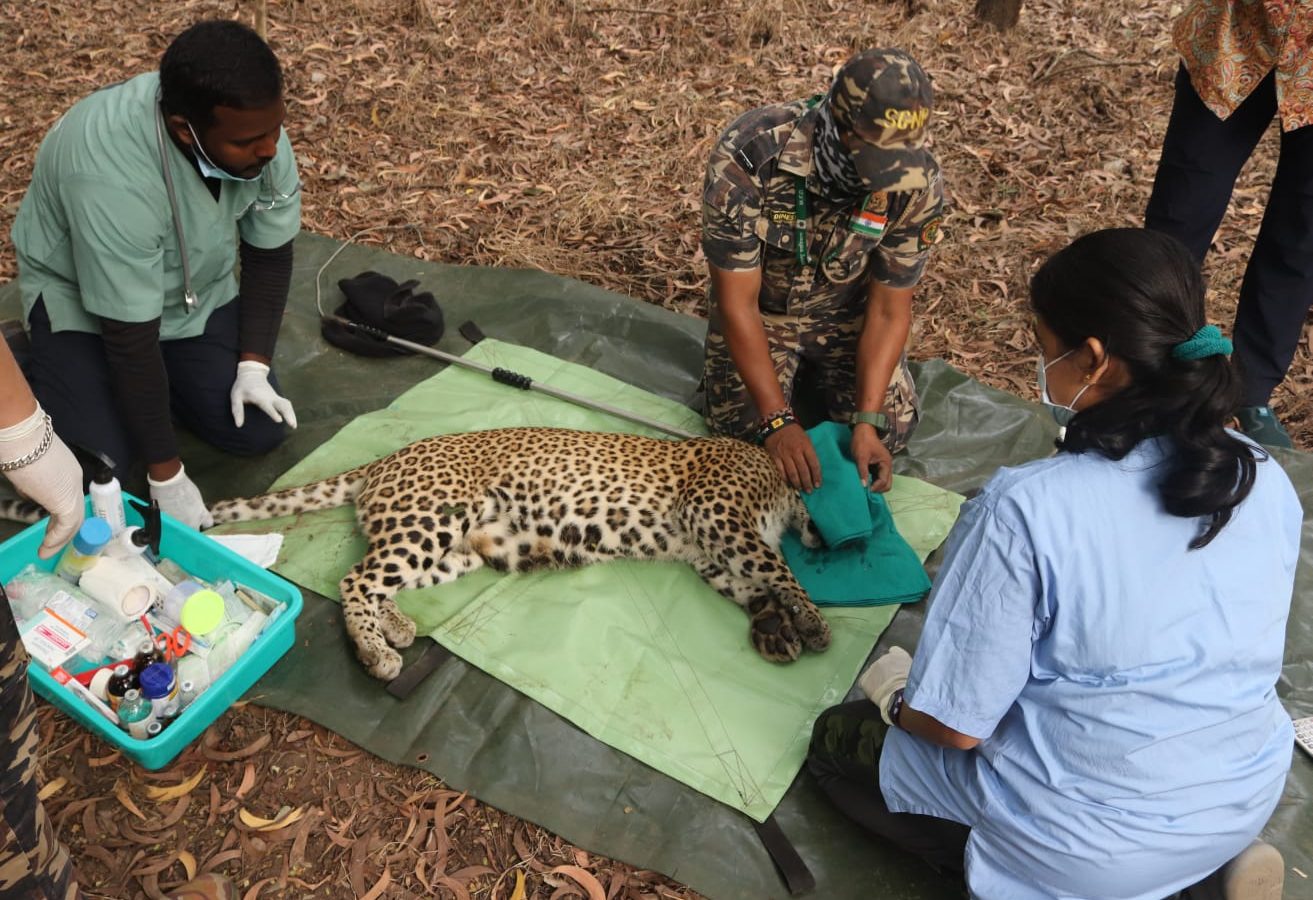 Wildlife conservation is exciting in many ways and has its own thrills. It is no less adventurous than what we witness in a National Geographic or BBC Earth wildlife documentary, such as walking through dense forests to radio collar one of the most ubiquitous big cats – leopards.

In a successful Public Private Partnership, the Maharashtra Forest Department collaborated with Wildlife SOS and WCS-India to radio collar leopards at the Sanjay Gandhi National Park in Mumbai. WCS-I, along with the park authorities have undertaken a study to observe and understand the adaptation of leopards in this largely human-dominated landscape. Sanjay Gandhi National Park (SGNP) has possibly one of the highest density of leopards in the world for a single place, with an estimated 40-45 of these big cats sharing space inside the park.

This study is to be conducted in two phases, wherein a total of 5 leopards are to be radio collared in this 2-year study period. In the first phase, two leopards were radio collared, of which one was a 6-year-old male named Maharaja and the other one a 3-year-old female, Savitri.

Wildlife SOS is providing technical and veterinary expertise during the second phase of this project. While radio collaring an animal, a lot of factors have to be kept in mind, the first of which includes a proper medical assessment. A leopard is first captured using trap cages without causing any discomfort to the animal. It is only after the leopard is captured that Wildlife SOS’ role begins by sedating the animal first.

We are tasked with ensuring that the leopard is sedated throughout the procedure, its vitals are normal and the collar is placed and activated appropriately by the team. We have to make sure the collar fits perfectly so that it is neither too tight to cause the leopard discomfort, nor too loose to fall off, and the revival process is seamless before the leopard is released.

Kranti, an approximately 6-year-old female who roams the Yeoor hills range in Thane is the first leopard to be collared in the second phase. In the second week of January 2022, Wildlife SOS veterinarian – Dr Nikhil Bangar successfully tranquilized the leopard and she was then fitted with a GPS radio collar by a team from WCS-India and Wildlife SOS. WCS-India team included Dr. Vidya Athreya & Nikit Surve and the entire operation was done under the guidance and supervision of the Maharashtra Forest Department. The leopard was named Kranti as she was collared on Makar Sankranti and Kranti in Marathi also means revolution!

SGNP is a 100-sq-km forest reserve and is possibly one of the only national parks situated at the heart of a metropolitan city, which makes the entire landscape not only unique but sensitive too. It has been the center of controversy due to the rising conflict with the elusive cats whose habitat is under a lot of biotic pressure due to the growing developmental needs of the city.

It is still not known how exactly the leopards have been manoeuvring themselves in such a hybrid semi-wild, semi-urban environment. So the purpose of radio collaring these leopards is to understand the movement of these remarkably adaptive felines and give us an insight into how they manage to locomote through human-dominated areas such as busy streets and highways. The project has identified and chosen these leopards based on the frequency of their visits, and the ones who visit the city areas the most to look for easily available prey in the form of stray dogs or poultry.

To sum it up, this magnificent big cat has become the living symbol of perseverance when it comes to adapting in both a natural and a concrete jungle. But their habitat is shrinking. Leopards are primary consumers in a food chain and are ecologically indispensable. And in SGNP, they have shown how masterfully they can use their surroundings despite a rapid metamorphosis of the natural environment. This entire project is an arrow in the right direction which can go and hopefully hit the bull’s eye of leopard conservation in the country, and in protecting their home and environment successfully.

The Society of Rhesus Monkeys