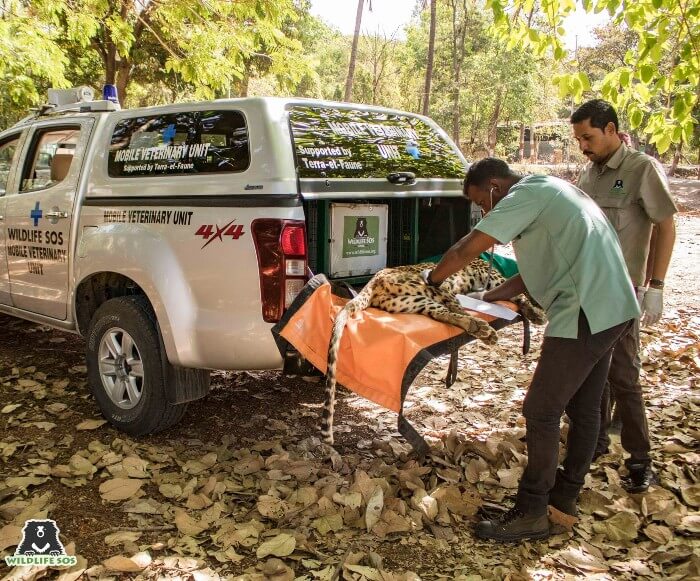 Oftentimes when people watch videos of leopard rescue operations, they only see the tip of the iceberg. They do not realize the effort that goes into every single mission. A successful rescue operation requires a chain of events –  an informed public, a rapid response team, a reliable group of veterinarians, a safe mode of transportation, and sophisticated equipment. Of course, each rescue operation must be treated on a case-by-case basis. However, with a strong base, we can ensure quick action in any scenario.

Just to elaborate on how each rescue case can be highly different, think of a situation where a leopard has been spotted in a crowded market and another where a leopard cub has fallen into a well. In the first scenario, there would be a flood of calls coming through the rescue helpline. Panicked people would be asking for help. Here, the priority of the would be to initiate crowd control. The team needs to ensure the safety of all the citizens in the market. In such situations, coordination with the police and the forest department is highly necessary.

In a huge place with so many people, the leopard would have many hiding spots and would be difficult to catch; making the rescue operation quite challenging. The team would have to first tranquilize the leopard before relocating it. In the second scenario, where the leopard cub has fallen into a well, the most important thing is for a person to spot the cub. Hence, we need to rely on vigilant citizens to contact the Wildlife SOS helpline number after spotting a distressed leopard. Then the team can lower a trap cage into the well to safely extricate the leopard.

In just these two hypothetical scenarios, we can see how differently the team needs to tackle the rescue operation. We have to undertake many such missions every month and each mission differs drastically from the previous one. The team of rescuers has to be ever vigilant and ready for anything thrown their way. With so many variables at play; it is their strategic thinking that ensures a happy ending to each rescue operation.

Not only are rescue operations highly tricky, but they are also quite expensive and dangerous. To undertake a rescue operation, the team needs to have safety gear to protect themselves. They also need to take into account the cost of fuel for the travel, special crates to transport the leopard, and medicines. When moving a large animal like a leopard, there may also be the requirement of a tranquilizer. Moving a large animal in a travel crate is not as simple as it sounds. The team has to be prepared to tranquilize the animals at a long range or even in close proximity.

In certain rescue operations, the tranquilizing process can prove to be near impossible. For instance, when a leopard entered a school canteen in Dhokeshwar village in Maharashtra, it became very difficult for the team to pinpoint the exact location of the leopard as it kept scrambling around. The team had to cut a hole into the door of the dining hall to spot the animal.

In many cases, people are unable to get a clear look at animals when a distress call comes in. During such a scenario, the team has to analyze the pug marks left by an animal in the mud and look at blurry photos that onlookers might have taken to guess the species, age, and approximate body weight of the animal.

When going on a leopard rescue, the team cannot show up empty-handed. A lot of gear needs to be ready in advance – such as a crate to transport the animal, safety gear for the team, dart guns in case of emergency, first aid kits to provide emergency medical aid, and water to keep the animal hydrated.

If the team undertakes a complicated rescue such as a borewell extraction, they have to use equipment such as trap cages, ropes, and pulleys.

Many times, vague distress calls come in from far away places, and the team has to travel large distances to get there. There have been instances where the team could find no signs of the animal upon arrival. In the worst-case scenario, onlookers might not have identified the animal correctly. They might also have been unsuccessful at clicking any photos. The team cannot simply pack up and leave when confronted by such cases.

They have to conduct a survey with the nearby people to see how many were able to spot the animal. Then they have to figure out where the animal escaped to; according to the information provided by the witnesses. If the animal went back into a forested area, the team can rest easy. However, the team has to stay and do reconnaissance if there any abandoned factories of sugarcane fields in the vicinity.

Hence, we do a lot of work to keep everyone safe even after the animal disappears. This is the most important way to mitigate human-animal conflict.

To reunite leopard cubs with their mothers, the team requires motion-sensing cameras with night vision and other such sophisticated pieces of technology. They utilize these to monitor the cubs through the night. The team also needs a reliable transport system to carry the animals and store all the gear for the rescue operations.

To prepare for certain emergencies, Wildlife SOS has a Mobile Veterinary Unit (MVU) in place. It is a modified four-wheel pickup truck that has a leopard transport cage and other rescue gear. It also contains medical supplies for on-site treatment and veterinary intervention in the field. The MVU enables our team to transport rescued leopards and conduct rescue operations across the state.

Time is always of the essence in such scenarios; the presence of the MVU allows us to take swift action during leopard emergencies.